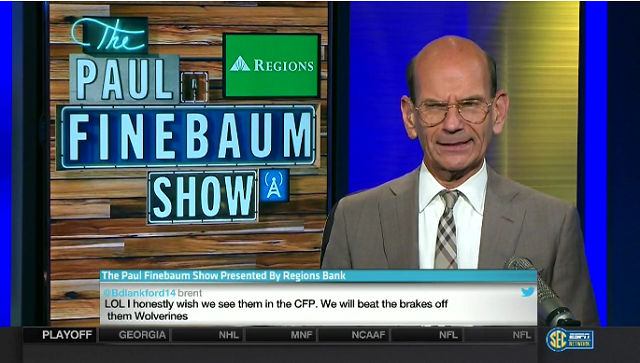 No one is more of a college football authority, specifically on the Southeastern Conference, than Paul Finebaum. The longtime radio show host, ESPN commentator, and New York Times best-selling author is working on a new book. He’s collaborating with AL.com’s John Talty to write about the rivalry between Alabama’s Nick Saban and his former assistants: Texas A&M’s Jimbo Fisher and Georgia’s Kirby Smart.

Awful Announcing caught up with Finebaum to discuss his new book and the state of the sport.

Why write another book?

“Ultimately, this book is really about the future of college football and how it’s under assault by NIL. How the key players are dealing with this, especially the greatest figure in the game’s history, which is Saban, who is at a vulnerable point in his career. He’s going to be 71 in October, and nobody has ever won a national championship at that age. I don’t think it’s hyperbole to say this is really a Shakespearean drama. To me, you have all the characters, There’s a lot of mythology here. There’s a lot of father and son vying for supremacy. I think it’s a much deeper story than a coach and a couple of his acolytes.”

Who will eventually replace Saban at Alabama?

“That’s probably the most difficult question I could possibly be asked. If it happens in the next 2 to 3 years, I would keep my eyes on Mario Cristobal, Billy Napier, and Dave Aranda. Those are three candidates that would be worth paying close attention to. … If something happened right now, Bill O’Brien would be the most serious candidate, the offensive coordinator. He’s got head-coaching experience.”

What’s your reaction to Arch Manning committing to Texas?

“Archie Manning, when I was a young kid, was the biggest name in college football. Peyton and Eli obviously speak for themselves. Now you have the grandson. This guy may be better than all of them. How anybody knows that, I have no earthly idea. But that’s what they are saying. And he’s going to a school that has been mediocre over the last 10 years. Downright embarrassing may be more accurate. He’s going there to try and resurrect that program as it enters the SEC …. It’s got high drama written all over it.”

Will there be pressure on Texas coach Steve Sarkisian in 2023?

“Without Arch Manning, he would be in a do-or-die season right now. But getting Arch certainly saved him for the time being. I don’t think he gets a long leash there at all. This will be his second year. I don’t expect it to be great when you look at the schedule. But by the third year, when Arch Manning comes in, that season is going to determine a lot.”

Which players are you looking forward to watching this fall?

“I think the most intriguing player in the country is (Alabama linebacker) Will Anderson Jr. If those of us who vote in the Heisman race weren’t so biased about quarterbacks and running backs, he would have won the Heisman last year. I’ve watched Alabama football pretty closely for 40 years. I think he’s in the conversation as the best player I’ve ever seen.”

“Jordan Addison is someone I’m intrigued by, the wide receiver who went from Pitt to Southern Cal. When you’re the best wide receiver in the country and now you’re catching balls from one of the two best quarterbacks in the country in Caleb Williams, your chances for getting a lot of attention are enormous.”

Who is going to be more successful both short-term and long-term: Lincoln Riley at USC or Brian Kelly at LSU?

“I think Lincoln Riley short-term will probably be more successful. He does not have to deal with the SEC West, which means he doesn’t see Arkansas, Texas A&M, and Alabama every year. He’s got a shot early on.

“Long-term, I do like Brian Kelly’s chances, because you can win a national championship at LSU despite almost everything. The last three coaches at LSU have all won championships: Saban, Les Miles, and Ed Orgeron. And the final two are out of coaching right now and are unlikely to ever return. Brian Kelly is a phenomenal football coach.”

Is Jim Harbaugh staying for the long haul at Michigan?

“A year ago, I think he would have grabbed the first NFL job, and I think he tried to. Jim Harbaugh got humiliated by the Vikings. He wanted the job. To me, it’s astonishing to think that one of the top coaches in college football went to interview for a job in the NFL and didn’t get it. I think he’s always on a short leash.

“The one thing he has going for him is that his fanbase doesn’t expect very much. This isn’t the Michigan of yesteryear. This is a Michigan that has pretty much accepted that it’s a second-class citizen to Ohio State. Yeah, we all know what happened in 2021. But that’s an outlier. Ryan Day could not get away with losing to his rival just about every year.”

Any chance Urban Meyer gets back into the college game?

“Bobby Petrino got back in, Others have made it back in. I think there is some athletic director, some college president who is willing to be publicly humiliated at a press conference and sit next to Urban Meyer. There’s always somebody. The sport really doesn’t have integrity any longer.”

What’s the weirdest interaction you’ve had on your show?

“Obviously the weirdest in my career was Harvey Updyke, the guy who called in 2011 and admitted to poisoning trees at Toomer’s Corner. He ended up going to jail. I’ve had quite a collection of greatest hits on calls. I had a guy who called me from an ER who thought he was dying from a heart attack. He wanted to say goodbye. I asked if he would put the nurse on. ‘This guy’s name is Smokey and he’s in the ER at this hospital in Birmingham?’ She said it’s all true.”

“A couple of weeks ago we had two consecutive calls. Both were Alabama fans. Both had been convicted felons. One guy is a known felon. He was convicted of murder at a very young age. I jokingly said to the next (caller) ‘Don’t tell me you served time in prison too.’ He said ‘Absolutely’.”