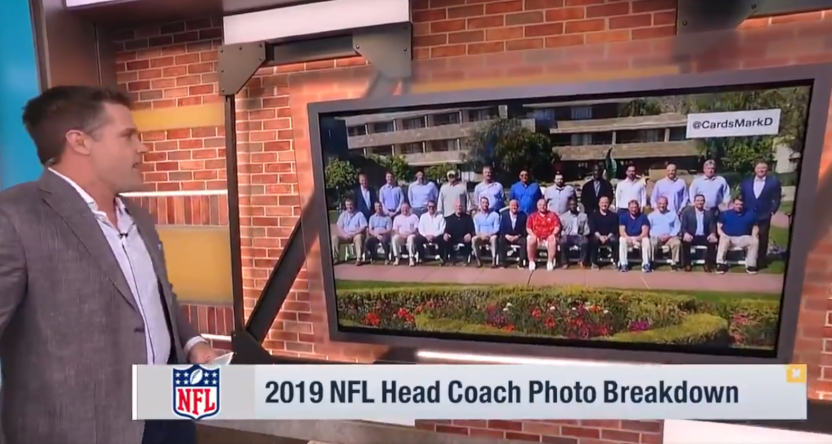 The NFL’s annual coaches photo always provokes a lot of jokes, for good reason. But it’s interesting to hear some of those jokes coming from inside the house, as it were, and NFL Network’s Good Morning Football did just that with a Kyle Brandt segment Tuesday morning. Brandt spoke with Awful Announcing Tuesday night about doing that segment, and about how he more generally approaches cracking jokes (see his segments comparing the NFL to Star Wars, the Oscars and Goldeneye) while on a league network.

Here it is. How’d your coach look?

Do NOT miss the NFL coaches photo breakdown by @kylebrandt pic.twitter.com/7bKVLSDq8a

Brandt said with this clip, he tried to find the right mix between finding things to poke fun at while not being overly mean, and that approach isn’t just because he’s on NFL Network.

“Even aside from the network or in addition to it, I think it’s not really good sport to just absolutely tee off on those coaches,” he said. “Because, listen, what we’re talking here, these are in-the-office grinders who wear mostly team logo clothes. That’s what they do. Many of them are very large, and I like the picture every year; they’re in the desert heat and they seem to always be staring right into the sun. And top of that, they’re surrounded by their greatest rivals and the people who want to professionally murder them, so I think it’s like almost impossible for them to look comfortable, let alone cool. It is such an awkward premise for a photograph just to begin with.”

He said he hasn’t experienced any pushback from the network, but he does keep in mind where he works (and also, that his show’s supposed to be a light-hearted morning show) when he’s cracking jokes.

“As far as pressure from the network, there is none. As far as the network, they’ve never told me what to say or what not to say. But when you sit down at your table every day on TV and there’s the network shield, it’s like I don’t want to be the guy going full out towards good men. Like, Ron Rivera is a good friend of the show, and I think he’s a great guy. I would never go on the network and say ‘I don’t like his shirt.’ It’s stupid and it’s not our style.”

“I think if you were on a network that wanted something more bombastic it’d be easy to take anybody from one of these coaches’ photos and make fun of how they look and say that their dress collection is going to reflect their roster. You could go to a million metaphors. It’s just like, it’s not what we do, and I don’t think the network would like that, and I don’t blame them. Also, I’m on a morning show; we’re not in the business of getting up and kicking people in the shins.”

Brandt said he always tries to keep in mind the balance between jokes and mockery. In this case, it helps that the owners don’t take that photo too seriously either.

“It’s hard, because I think there’s a fine line between humor and mean. You can be mean and go into bullying, you could talk about weight, you could talk about who’s bald and who’s stressed, and I don’t think that’s it at all. It’s funny…Peter Schrager’s always at the coaches’ meeting when that happens, and he has told me that every year, the second it happens, owners are showing their coach what was said about their socks or shoes and they’re laughing about it.”

Brandt said the coaches themselves are aware there’s going to be some mockery there, too.

“I had an NFC coach come up to me at the Super Bowl after he did the show, and we did the interview and he was fine and everything like that, and he said ‘I’ve got to be honest with you, man, I’m just so glad you didn’t ask me what I was going to wear for the coaches’ photo because I’m terrified.’ And I’m like ‘I get it,’ and he’s like ‘Have you seen some of the coaches in the NFC now? These guys are so young and so handsome. How am I supposed to look good?’ That’s the thing. …These guys, they’re maniacs for film rooms and workouts, they don’t know how to match their shirt with their belt, with their shoes. They have no idea!”

“And it’s kind of funny, because that picture is so raw. You would think that maybe like the league would have stylists, or hairdressers, or suggestions like ‘Why don’t we all wear the same blazer like we’re on CBS or something, and look very stately?’ It’s a come-as-you-are thing. It’s rock and roll, like it’s not changed, like Matt Patricia shows up in his black baggy shirt, right, and Jason Garrett shows up in his navy blazer. It’s not like the league says ‘Gentlemen, this will be our official composite portrait and we’re all wearing a blue tie.’ No! It’s really come-as-you-are, and I think that’s why it’s so popular online, it’s so real.”

“Maybe it’s part of where I work and maybe it’s a part of the show that I’m on, but I look at those guys like they’re the 32 kings, man. I don’t have the schadenfreude, the joy from seeing other people suffer. I want the league to do well. Our network is not only about pro football, it is pro-football, it is in favor of football. Like, something like Jon Gruden falling on his face over the next five to ten years would be bad for the sport. Adam Gase making the Jets good again would be good for my job, it’d be good for my family. So I find myself rooting for those guys. I don’t look at them at these like ‘Oh, here comes another clown who thinks he can fix the Jets or the Bengals. I actually actively hope that they do.”

…”And so I think a lot of people, I can’t really speak to other networks, but certainly a lot of people on Twitter, it’s just the next piece of kindling that they just want to burn alive. And if they come out in a goofy shirt, they got a target, all the better way to start it. I look at it more like it’s a fraternity and the new guys that come out, like whether it’s [Matt] LaFleur with the Packers or Zac Taylor with the Bengals, they’re like the fraternity pledges. And so with the pledges there goes a bit of hazing, the good-natured stuff, like ‘Carry my book bags.'”

…”It’d be very easy to skewer someone like Matt Patricia who looks different and dresses different. But I like Matt Patricia and I hope he does a hell of a job with the Lions this year. I just think if I was sitting there and I had a Twitter account, right, let’s say I had five million followers, and all I wanted to do was to take potshots at different coaches, I can probably get a lot of retweets on it because there are people waiting for coaches to fail. I think part of what we do at the network is actively wanting them to succeed.”

When it comes to the other pop culture segments he’s done, Brandt said he tries to keep that same balance of having fun without being too mean.

“It would be very easy for those things to just be roasts. To just kick people in the balls over and over and over. So the challenge is like, ‘How do we be funny without being mean? Like I remember once, we did a thing after that terrible Falcons-Patriots Super Bowl, and everybody was just destroying Kyle Shanahan for not running the ball and running the clock. And I compared him to Theon Greyjoy from Game of Thrones. Both of them come from great families and had this terrible, terrible thing happen to them right in front of our eyes, this thing that we couldn’t believe was actually gonna happen and then it did.  You know, one didn’t run the ball and one was castrated. But you know what, Theon battles back, and Shanahan is going to get another gig with and he’s going to get past this, and Theon is back on the ship, so it was a positive spin on it.”

“And frankly, I came from talk radio where I used to work with Jim Rome. And Jim Rome, especially when I was working for him, sometimes would just unleash nukes on people who deserved it, who did stuff or who had it coming, and we would do 15-minute diatribes, just launching daisy cutters at their head. Now, I kind of don’t do that anymore, because we’re in this fun happy show in the morning, and I don’t think people want to get out of bed in the morning and watch, you know, the guy sitting next to Schrager on NFL Network just eviscerating somebody for 20 minutes on end.”

He said that also makes them a juxtaposition to a lot of what else is out there in the sports world.

“So it’s more like, even when people do something stupid, we try to make it light. And I think with so many people screaming on TV and pissed off about so many things, I think it works for us.”