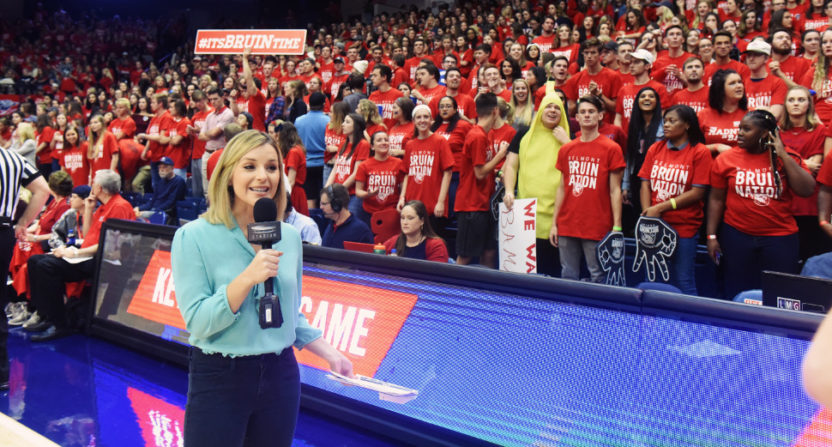 Kristen Balboni has held a lot of interesting roles over the years, from ESPN researcher to Mike and Mike contributor to The Buzzer on Fox host. She’s recently been working as a college football and basketball sideline reporter for Stadium, the digital and over-the-air sports network which streams games, studio shows and original programming around the clock on Facebook, Twitter, WatchStadium.com and other properties. Balboni is now joining that network full-time as both a reporter and a studio host. In an interview with Awful Announcing this week, Balboni said she’s loved her work with Stadium so far, with the freedom provided to tweak the standard format of broadcasts being an important selling point for her.

“I’m really excited about it because I’ve been sideline reporting for their live events side for the last four months, almost once a week or twice a week, I’ve done something like 25 basketball games for them, and I’ve loved it,” she said. “I mean, truly, truly, truly loved it, I’m not just saying that. It’s so cool because on their live events side, their partnership with Facebook, there’s no commercials and there’s no halftime show, so I’m getting all that time and experience.”

Balboni (seen above broadcasting a sold-out Vanderbilt at Belmont basketball game on Stadium last November) said beyond just the extra airtime, the network has provided her with the chance to really make the sideline reporting role stand out.

“I think it’s something pretty unprecedented for a sideline reporter. They really gave me the freedom to just ‘Do what you want to do, make it as fun as possible, there’s no rules.’ So that to me right away was super intriguing given my past, coming from Mike and Mike and The Buzzer on Fox, where it was also very free. I was so pumped. ”

She said the people she’s worked with were a key selling point, too.

“I’ve just had the best experience with them on the live events side, and I’ve had time to meet their studio people, so when they came to me and said ‘Would you like to do a hybrid role, where you’re still going to get to travel and be at our biggest events, you’re going to be our lead reporter, but we’d love to have you in studio and bring some of that creative freedom into the studio?’ it was something that I couldn’t turn down because of the experience that I’d had with them so far.”

As per that studio role, Balboni said she can’t provide too many details yet, but there is a studio change in the works.

“I can’t say too much because things are so in flux, but I think it’s going to be really cool. They’re really looking to make things interesting and change things up, and I’m excited about it,” she said. “They’re moving our studios into the United Center. Our studios are going to be like six feet away from the Jordan statue. As someone who went to UNC, I’m pumped for just that. It’s going to be really cool to kind of be at the epicenter of all of the Chicago sports and be in a live environment like that. There’s going to be a glass-backed studio wall so people can come in and see everything and kind of get in the mix while we’re having studio shows, so I’m excited about that.”

Balboni has worked on plenty of different sports, but said the college sports experience particularly stands out to her.

“I’ve really enjoyed covering college sports, I enjoyed covering them when Mike and Mike talked about them, I enjoyed covering them for At The Buzzer, and then especially doing these games, both football and basketball for Stadium, I would say that just the vibe of college sports is great. I think it was (former Kansas basketball player and current Wake Forest head coach) Danny Manning who told me ‘College sports are the last time you really feel like a family and everyone is there to support you.’ You definitely get that vibe going into those schools and talking to the kids and the coaches and the SIDs and the people that support them. That’s something that I really enjoy; I went to UNC, my parents went to UNC, that was my first love as far as sports go, so getting to cover college sports is a lot of fun.”

Balboni worked for ESPN’s Mike and Mike from 2011 through 2015, contributing both on-air and behind the scenes and hosting the weekly Behind the Mikes podcast. She said that experience was crucial to furthering her career.

“I had the best teachers of all time by working with Mike and Mike. It definitely really hit me, I’ve always been really fortunate that that was my first real job, but especially with it ending this year, it really hit home. I remember I was watching the last show in a hotel, I was doing a game for Stadium, and the fact that those were the people I got to learn from, both on camera and behind the scenes…I’m still close with the staff there, I think I had the best teachers, and I got an experience that’s probably kind of a once-in-a-lifetime thing to have mentors like that.”

She said her time with both Mike and Mike and The Buzzer On Fox was important for how those jobs influenced her view of sports coverage and provided her with ways to experiment with different forms of coverage on air and online.

“I would say with both of those jobs it’s just about being flexible and having fun. I know that sounds cheesy, but really, both of those jobs I had so much fun, all the time. We’re not doing rocket science, we’re talking about sports, and I think people forget that, especially in this climate where it’s a lot about yelling and being right and screaming at each other. I think the thing I really learned from those jobs is that it should be a good time. My goal is to entertain people, and it doesn’t have to be difficult or hard. It can be a good time.”

“I think what Stadium is doing is really inventive and I’m excited to get started.”