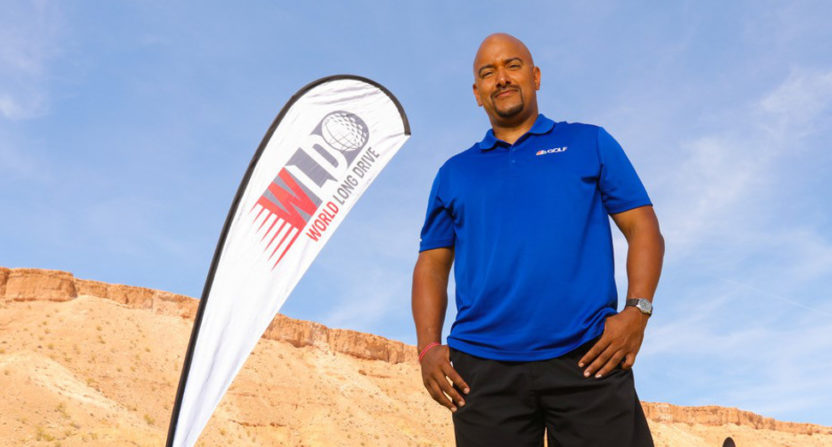 Earlier this year, former ESPN anchor Jonathan Coachman announced that one of his next moves would be calling World Long Drive Association events on the Golf Channel. The first one of those events, the “Clash In The Canyon,” is currently taking place in Mesquite, Nevada, and Coachman will be calling the men’s and women’s finals Tuesday night, with coverage airing live on Golf Channel beginning at 7 p.m. Eastern. Coachman spoke to Awful Announcing Monday, and said this represented a great chance for him to get into calling golf.

“I’m a big golf freak as it is, and the last, whatever, ten years I spent at ESPN, I really wanted to get into golf and they just didn’t have any golf programming, and when I kind of decided what the next five to 10 years of my career was going to look like, I wanted golf to be a part of it,” Coachman said. “And I’m kind of a non-traditional kind of announcer, so World Long Drive and The Coach kind of fit together. The competitors and I are kind of similar, competitive, athletic, big, strong, all those kinds of things, so I feel like I fit in pretty well out here, but it’s also still golf, and I’m a big golf guy as well.”

Coachman said he’d previously been aware of long drive before signing on to call it, but has been studying the sport particularly hard the last few months.

“Aware, yes. Did I dive in head-first into the deep end until now? No. But man, have I had a crash course over the past couple of months. And I’ve got some great people here, my partner Art [Sellinger, a two-time U.S. National Long Drive champion] has done a great job of really educating me on the sport. I, like a lot of other people, thought it was just big dudes stepping up and ripping the ball, and there’s so much more to it then that. There’s technique, there’s ‘Where’s the wind coming from?’, all those kinds of things that go into it that I really didn’t realize until I started educating myself.”

For those unsure of what to expect from a long drive event, Coachman said it’s well worth watching for the spectacle.

“I’d say go see it in person. My goodness, we’re out here today and I am astonished at how far, how high, what it looks like. Hopefully we can show it on the telecast and describe it to the viewers. For somebody who loves to see something go a long way, and straight, it is shocking how far these guys are hitting it out here today. I just came in from the last group and I believe 454 [yards] was the winning drive. That’s crazy, crazy!”

There are some potential challenges to doing play-by-play for a long drive event, specifically in avoiding repetition in describing the drives, but Coachman said a focus for him is going to be talking about the competitors’ backgrounds and what makes them unique.

“It’s not about [calling] drive after drive after drive, it’s about storytelling, making the viewer at home care about the person hitting the golf ball. And I think any time in today’s day and age, whether it’s golf, basketball, football, heck, pro wrestling, you’ve got to make the person care about the person hitting the ball. And I think that’s what makes a viewer at home want to watch on a Tuesday night at 7 Eastern on the Golf Channel. It’s different than calling play-by-play and calling every hit as it’s going, I think that’s the challenge, but I think that’s something that I’ve been doing for years.”

This is the first of the five World Long Drive events Golf Channel will televise this year, with others following in May, June, August and September.  So it’s the first chance for Coachman to actually call this. He said his practice reps so far have just come in front of the mirror, and he’s still working on a signature call.

“In front of the mirror in my hotel room, yeah,” he said with a laugh. “I’m trying to come up with my signature call, you know, Jim Nantz had his ‘Win for the ages!’, I don’t know if mine’s going to be “#MatchItUp! That one went straight!”, I don’t know what it’s going to be, but I’m working on it, and maybe it just has to come out naturally. But in my time, I’ve realized that if you don’t have something prepared, Jim Nantz has something prepared for every single scenario, then you’re never going to have it come out the way you want. So I’m still working on it, but I have a bit of time left.”

Since leaving ESPN last fall, Coachman has found some new projects, including a return to WWE to call Monday Night RAW and these Long Drive events. And he said he has more in the works, and he’s thrilled with how things are going so far.

“Man, I couldn’t be happier. It was a conscious decision, and a lifestyle decision, and a vision that I had of bringing…you know, I spent nearly a decade at WWE the first time, nearly a decade at ESPN, and literally I woke up one day and said ‘All of this could happen together.’ I could do everything I’ve been a part of for damn near two decades, and not only would it make sense, you could have cross-promotion, you could have eyeballs, you could have everything that they said 15 or 20 years ago would never happen, and we could make it happen. ”

“And that’s what I said seven months ago, and now look where we are today. I’m doing Monday Night RAW, I’m doing the World Long Drive, we have another big project in the works that we can’t talk about yet, so I’m doing all these things that I want to do. But it’s not just about me, it’s about having networks and companies that also believe in that same vision and say ‘This is what we have to do moving forward.’ So I’m excited about where we are, and I am motivated by where we can get in the next 12-18 months.”

Coachman said he thinks the World Long Drive events will be well worth watching, especially for golf fans interested in some golf action outside of most tournaments’ Thursday-Sunday runs.

“I just hope people enjoy it, that they buy into it, and also that they look into it as something that is different from what they’re used to. That’s what we’re trying to bring to the table, and introduce this really to the golf world as an alternative on Mondays, Tuesdays, Wednesdays, to have something that the Golf Channel can really have seven days a week and you don’t have to wait until Thursday to get your fix.”