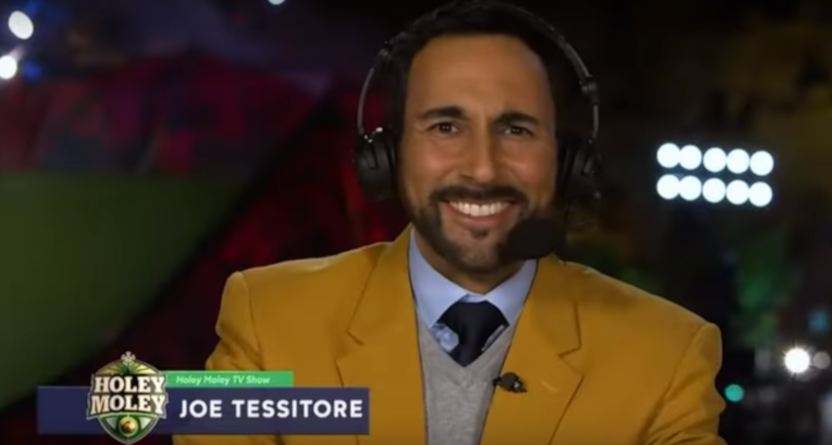 Another notable element of the show comes from the old-school ABC Sports gold blazers Tessitore and Riggle wear. Tessitore said he connected with those immediately given his own history of watching ABC Sports broadcasts, including the famed Saturday afternoon Wide World of Sports.

“I’m 48 years old, and for me, being a kid growing up in the 70s who loved boxing and Saturday afternoons watching ABC, and Howard Cosell was just iconic. And not just to me, but strangely…I’m the son of an Italian immigrant, and I grew up in Schenectady, New York with a lot of aunts and uncles who spoke broken English or didn’t speak English. And we assimilated by watching television and watching sports television. And Howard Cosell, my grandfather Joe Miranda loved, even though he couldn’t speak English. When Cosell came on, he just loved Cosell, his presence, his cadence, his inflection. And as a little kid, I used to do an impersonation of Howard Cosell, and my grandfather, it would make him laugh. So there’s some connectivity for me when I put on that gold jacket.”

“Strangely, the gold jacket had not been seen in years and years and years, and then ABC brought it back briefly when Mike Greenberg and I did the rebooted Battle of the Network Stars. And then they brought back this edition of it, which is really, if you look at the patch on the left breast, it’s really the classic ABC jacket with the old logo. So I’ve had the honor of wearing both reboots of the gold jacket, and I love it.”

While Holey Moley is far from the most serious event that’s been covered in those gold blazers, Tessitore thinks it actually fits in with some of the other out-there stuff that ABC used to show.

“Extreme mini golf is absurd, but it’s so absurd that it’s joyful, and you watch. And remember, that gold jacket was doing many extreme events; barrel jumping, Acapulco cliff diving. You can look at the history of legitimate sports coverage on ABC, not a buddy comedy mini golf prime-time show, and that gold jacket was attached to a lot of sports that had one-year, two-year runs on Saturday afternoon on ABC.”

In fact, Tessitore said he thinks this show’s concept probably would have gone over well with Roone Arledge, a key producer of the original Wide World of Sports who went on to serve as president of ABC Sports from 1968 to 1986.

“I think it’s something that Roone Arledge, who was always very forward-thinking, would recognize. Granted, ‘We’re going to build a giant rubber ducky and we’re going to have fire-breathing dragons,’ that wouldn’t necessarily have been on his mind. But if somebody had approached Roone Arledge early in the 1970s when ABC was televising the Evel Knievel Snake River jump and all of that, and said ‘You’re never going to believe this, we’re going to have a pirate ship and a plank and golfers are going to have to walk the plank and jump onto a giant great white shark,’ I think Arledge not only would have agreed, he’d have said ‘We’ll have Cosell there tomorrow.’ It is so wild that it fits in well into the bedazzled 1970s…in the Elvis Presley-Evel Knievel era of TV programming, there would have been a place for Holey Moley.”

Tessitore said he thinks Holey Moley has a broad potential appeal, especially with the changes made this year.

“You’ll probably find it entertaining, incredibly hilarious. People like wipeouts. The bottom line is that if you love wipeouts, if you love action, this year’s edition makes last year’s look like nothing. They built it bigger, there’s more drops, there’s more water, so the wipeouts are better. And the golf is much better, and that’s not a knock on last year’s golf, but the golf is much better. You have even more former pros, you have legitimate people. What happened last year is that when this aired, anybody who’s a great mini golfer or a great golfer said ‘Wait a minute, I can do that, I can win a quarter of a million dollars.’ So many of the contestants this year have legitimate talent.”

“So you’ve got big wipeouts, you’ve got very competitive golf, and then you have a show that’s multigenerational fun. You can watch it with your kids, with your teenagers, with college kids home during the quarantine, middle-aged folks, older folks. It’s one of the very few multigenerational things we have in primetime television.”

Tessitore also likes how Holey Moley stands out from much of the rest of network programming.

“And it’s in this spot that’s really an alternate universe, it’s almost a Willy Wonka kind of situation, this world that you come into. And I think a lot of network TV shows fall into very obvious boxes. Here’s the matchmaking show with the contestants they eliminate, here’s the singing competition show with three judges. This just doesn’t fit into the boxes. It’s got some wonder to it, it’s got the exotic to it [with the course], it’s got the comedy, it’s got great competition to it. It’s different.”

And he said this year’s changed format (a season-long competition with a playoff system for one $250,000 check rather than a competition in each episode for $25,000) also appeals to him as someone who likes stakes.

“The show is better this year. And we had a good show last year. What I like about the show this year is we have a playoff system that proceeds to a championship round. So each week, you’re trying to win the Holey Moley championship. You take those winners and you end up with a single putt for a quarter of a million dollars. It sounds so crazy for a guy who just broadcast a NFL playoff game, who just broadcast Tyson Fury-Deontay Wilder, and I’m not sure what it is, but I like when something’s on the line. You take all these mini golfers, you whittle them down, you go through all those crazy holes, and you get down to one putt for a quarter of a million dollars, and it’s great.”