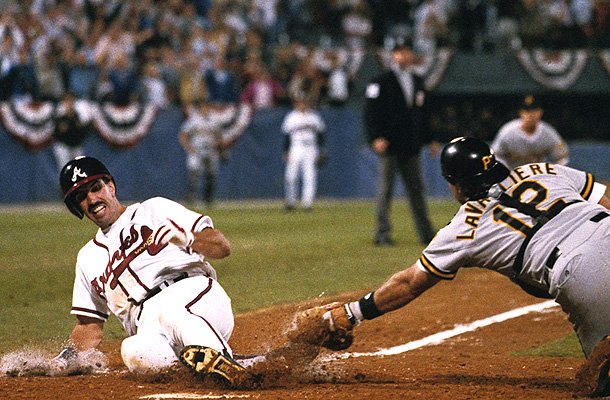 Following Sunday’s incredible last-second finish between the Saints and Vikings, the internet exploded with discussions of where this play ranked among the greatest finishes in sports history. The calls from Fox’s Joe Buck and the Vikings’ radio crew of Paul Allen and Pete Bercich will be remembered for years upon years by Vikings fans.

We wanted to know what calls of last-second finishes our staff liked the most, and they didn’t disappoint, going all over the board to multiple sports. Even our resident Saints fan, still smarting from the loss on Sunday, chimed in. Needless to say, he didn’t choose Stefon Diggs’ touchdown catch.

Andrew Bucholtz: I’m going with the CFL here, as it’s produced so many amazing last-second calls over the years. Many of them have come from TSN’s lead CFL play-by-play commentator Chris Cuthbert, including this year’s Grey Cup winner, the 2009 13th man, and Milt Stegall’s 2006 100-yard touchdown, and I’d pick him as my favorite individual announcer.

But my selection for this roundtable is actually from Cuthbert’s colleagues Rod Black and Duane Forde, for their commentary and analysis of the most bizarre ending I’ve ever seen in football at any level, the 2010 Toronto Argonauts-Montreal Alouettes kickabout:

To me, this is an excellent example of announcers being on top of a potentially confusing situation and explaining it to the audience (or at least, those parts of the audience familiar enough with the CFL’s unusual rules for single-point kicks, or rouges). Pre-play, Black initially notes the Argonauts sending punter Noel Prefontaine and two other players to the back of the end zone, Forde explains they’re planning to kick a missed field goal out if they can’t run it out, then Black further emphasizes the value of a single here if the field goal misses.

It does, and that leads to Black making a great call of the play, from Mike Bradwell knocking the ball down and kicking it out to prevent the single, Alouettes’ kicker Damon Duval kicking it back in (Forde appropriately notes that Toronto has to give him five yards as he catches it to avoid a no yards penalty, and then notes that Toronto’s Grant Shaw has to try and kick it out again), and Black giving the final play-by-play “They will kick it out, but they don’t get it out! Who has the football? It’s a touchdown, Montreal, on a bizarre way to end the football game.”

Forde then explains the no yards huddle from the officials and goes over the replay to prove that the no yards rule was followed with each received kick. This isn’t a situation that’s seen regularly, or almost ever for that matter, but the announcers nailed it, and provided a terrific game-ending call in the process.

Phillip Bupp: This may not be as recognized as one of the greatest calls of a last second finish as other calls but once you know the story behind it, you’ll know why it’s my favorite.

As the 1979 Daytona 500 was ending, Donnie Allison and Cale Yarborough were battling for the win while Richard Petty, Darrell Waltrip and AJ Foyt were a mile or so behind. This was the first live flag-to-flag broadcast of a 500-mile race so needless to say, this was a huge deal for NASCAR and CBS.

When Allison and Yarborough crashed on the final lap, CBS cameras were so worried about following the leaders that they had no clue where third place was and were frantically trying to find them before they crossed the line for the win and risk missing the finish. Ken Squier did a masterful job not only describing what was going on for the viewers’ benefit but also help the production truck locate the leaders and get a camera on them before it was too late. Cameras caught the three new leaders as they were exiting Turn 4 and Squier helped turn a potential disaster into a classic moment in NASCAR history as well as help vault NASCAR into more of a national, mainstream sport.

This is also a great example for networks to have commentators work on location and not off of a monitor in a studio. If a similar situation happened today and the commentators are working off a monitor, they’re at the mercy of the monitor and can’t do their job. When they’re at the event, they can go off monitors as well as see the action right in front of them and be able to call the game without skipping a beat if things technically go wrong.

Ian Casselberry: As a Detroit Tigers fan, I have deep affection for Dan Dickerson’s radio call of Magglio Ordonez’s walk-off home run to win the 2006 ALCS. I was driving home at that point and pulled into my driveway as Ordonez’s drive left the park. I should’ve run into the house to watch the aftermath on TV, but was just enjoying visualizing the scene in my mind too much. Dickerson captured the emotion of the moment for Tigers fans perfectly.

But my all-time favorite last-second or walk-off call is Jack Buck calling Kirby Puckett’s home run to win Game 6 of the 1991 World Series. The homer sent the series to a Game 7, prompting Buck to say “We’ll see you tomorrow night” before letting the moment and the noise inside the Metrodome take over.

It was a spectacular ending, but there was one more game to be played. The Twins kept the series alive and had a chance to win a championship the following night. Buck just perfectly captured the sentiment of the moment and, with one sentence, also framed the situation of that World Series. You feel the excitement in Buck’s voice, but there was no shouting. His delivery was almost matter-of-fact. Right there, Buck demonstrated how a professional broadcaster should work in a big moment.

Matt Clapp: I’ll go with one that shows off a crazy finish — and announcing call — more than any I can remember, in the Trinity football “Lateralpalooza” against Millsaps. The final play featured 15 laterals, and took 60+ seconds to complete (it’s considered probably the longest play in college football history, and it’s hard to imagine it not being so).

Trinity had the ball at their own 39-yard line, needing a touchdown on the final play of the game (these are D-III teams we’re talking about, so it’s unlikely the QB is able to get a throw far downfield). So for about the first 40 seconds of the play, the Trinity announcers (Jonny Wiener on play-by-play, Justin Thompson as the analyst) are just casually explaining what is going on: basically, here’s a lateral and there’s a lateral, etc.

But then the announcers start to see that Trinity actually, somehow has something brewing with this lateral-filled play. The play-by-play voice picks up as he’s explaining the unbelievable sequence, and then the analyst comes in, “GO! GO! RUN!”

After a few more laterals, somehow the field is wide open for Trinity’s Riley Curry, and the announcers lose their minds. This is just a great example of genuine, confused, stunned reaction and jubilation from two random announcers. It’s beautiful chaos, and you probably shouldn’t watch/listen to it with headphones on:

Joe Lucia: My choice (Sergio Aguero scoring the title-winning goal for Manchester City with the last kick of the season, and everyone proceeding to go absolutely mental) was chosen by someone else, so I deferred to something from my younger years – Skip Caray’s call of Francisco Cabrera’s walk-off, NLCS-winning single against the Pirates in 1992.

This at bat must have been sheer hell for Caray. The Braves’ season came down to a third-string catcher. If Cabrera popped up, or hit a weak fly ball, or grounded the ball to short, Atlanta’s season would be over, the Pirates would be National League champions, and who in the hell knows if the Braves’ dynasty even continues. But Cabrera didn’t pop up, fly out, or ground out. He also didn’t smash one into the gap, as Caray had just mentioned before the final pitch of the Pirates’ 1992 season. He lined a single to left field, Barry Bonds delivered a terrible throw home, Sid Bream somehow chugged his way around third and scored, and Caray abandoned all sense of neutrality after the safe call.

Cabrera’s single wasn’t just a season-changing play, it was a franchise-changing play. And while Caray didn’t know that at the time, what happened in the months and years following Game 7 of the 1992 NLCS elevated this call to another level.

Alex Putterman: Even though I’m far from a soccer guy, I’m going to pick Ian Darke’s call of Landon Donovan’s game-winner against Algeria in the 2010 World Cup. The call doesn’t have any sort of canned one-liner, just a frantic rush of words that mirrored the chaos of the play and the moment.

Darke built the excitement slowly (“There are things on here for the USA”) before exploding upon Clint Dempsey’s initial shot and Donovan’s heroic follow-up. Typically the best calls feature some level of restraint, but this moment didn’t need it. As Americans everywhere jumped and screamed, Darke provided appropriate energy, shouting “Go, go USA.” Then, like any good broadcaster, he knew when to take a step back, eventually letting us enjoy the most thrilling moment in U.S. Soccer history.

Jay Rigdon: This is a category with so many contenders. Last-second finishes produce iconic broadcasting moments, both historic (“The Giants win the pennant! The Giants win the pennant!”) and from the more recent past (“Do you believe in miracles?”) It’s also difficult to separate fan allegiances; your favorite call is probably your favorite team’s biggest moment, as celebrated by your local broadcaster. And that’s how it should be! (Here’s one that will always have a special place for me, even though it wasn’t a championship moment.)

There aren’t really any wrong answers here, so I’ll highlight one that’s always stuck with me as the moment I started to come around on Joe Buck. Long criticized as the beneficiary of nepotism, and as a play-by-play man incapable of acknowledging the importance of a big play, Buck managed to send off one of the most memorable World Series games in recent memory in perfect fashion:

“We will see you… tomorrow night!”

It was a nod to his father Jack’s legendary call from the World Series 20 years prior, when Kirby Puckett sent the Twins to a seventh game via an 11th inning walk-off. Buck helped link what was happening to history, lending the moment an instant classic status, and he did so by acknowledging his dad, who spent his career calling St. Louis Cardinals games in addition to national assignments. It didn’t feel forced, it didn’t feel cheap. It felt perfect.

Matt Yoder: Sticking the knife in with this one!!!

That’s all you really need to say for this call by Martin Tyler. It’s just perfect. There may be calls that are more meaningful to American soccer fans (and this could easily be Ian Darke’s call of Landon Donovan’s famous strike against Algeria). There are probably calls I can think about from my own sports fandom that are more meaningful.

But when it comes to an announcing call being 100% perfect for a match or championship winning moment, this is the one that comes to mind for me. It captured everything — the craziness of the game, the stunning goal, the late drama, what it meant to Manchester City, and what a memorable moment it truly was. It’s why Tyler is one of the best.