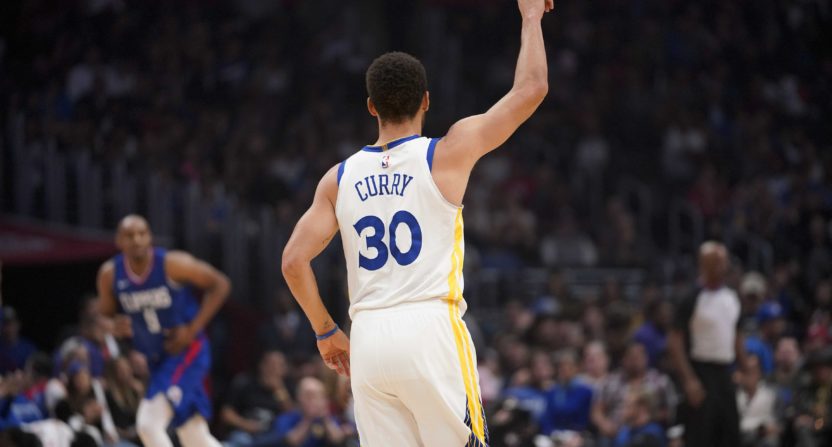 We’re now a full week into the year 2018, and it’s time for every outlet on the planet to roll out predictions for the forthcoming year (if they haven’t already). Since our beat is sports media, we asked our staff for their predictions about the year 2018 for the sports media world.

Our writers’ predictions are all over the map, covering a variety of different outlets, events, and personalities, and here they are.

Andrew Bucholtz: If the regional sports networks element of the Disney-Fox deal passes through antitrust review (far from a certainty), I think we’ll see ESPN quickly move to integrate those networks with its national channels, especially when it comes to personnel. While we’ve seen national networks own regional networks before with Fox and NBC, and we’ve seen some overlap and synergies in those cases, I think we’ll see much more when it comes to ESPN given the importance they place on reporting (both on SportsCenter and on their digital platforms).

It may make a lot of sense to have the reporters from the regional networks also handle national stories on local teams when they come up. That may lead to ESPN reassigning some of the local reporters they currently have to national beats or more in-depth assignments, but it may also lead to further layoffs.

Phillip Bupp: Despite the United States not participating in the World Cup, viewership for the World Cup in the United States will be high enough that Fox/Telemundo will deem it as a success. Maybe Fox’s viewership won’t be as high as ESPN’s for the 2014 version, or even the US Women’s National Team World Cup games in 2015, but there is reason to be optimistic for this year’s World Cup to be the kind of event this country has enjoyed in the past.

Half the games will be on Fox’s broadcast network, and no games will be on FS2. Telemundo will carry a lot of weight, and Spanish language viewership will likely retain strong ratings. And more importantly, given the United States usually just play in 3-4 games out of 64 in previous World Cups, the notion that the lack of the United States will doom World Cup viewership is a bit blown out of proportion. It’s definitely not ideal, and it will hurt the average rating because it’s never great to lose a game where 15 million people are watching and instead have a game where 2 million people are watching, but there are more than just fans of the USMNT living in this country and people will still be watching. Some just may need to find another team to root for this summer.

Ian Casselberry: Fox Sports is going to buy the rights for WWE away from NBC/Universal. Fox is already ideally situated for WWE programming. Raw and Smackdown can air on FX on Monday or Tuesday night instead of rerun movies. (Those movies can be the lead-in for WWE, as they are for FX dramas.) WWE highlights and videos would provide more content for FoxSports.com and Fox Sports Go, while personalities could appear on FS1 studio shows throughout the week. (A WWE star appearing on Fox NFL Sunday seems like an inevitability.) Reruns or highlight shows could also fill a lot of programming gaps on FS1.

Then special events (like a Main Event specialty show or maybe a lesser event that would’ve run on pay-per-view) can run periodically on FS1 or the mothership Fox network on a Friday or Saturday night, and the network could use that to promote its regular programming as the NFL and MLB do now.

** Cheating a bit with extra predictions that are too vague to elaborate upon: 1) I think a sports site (maybe Sporting News, Yahoo or USA Today) will go to a pay subscription model, following the success of newspapers getting readers to pay and maybe The Athletic. 2) ESPN’s social media policy is going to blow up in its face somehow. Maybe it already has with recent remarks by Jemele Hill and Katie Nolan. 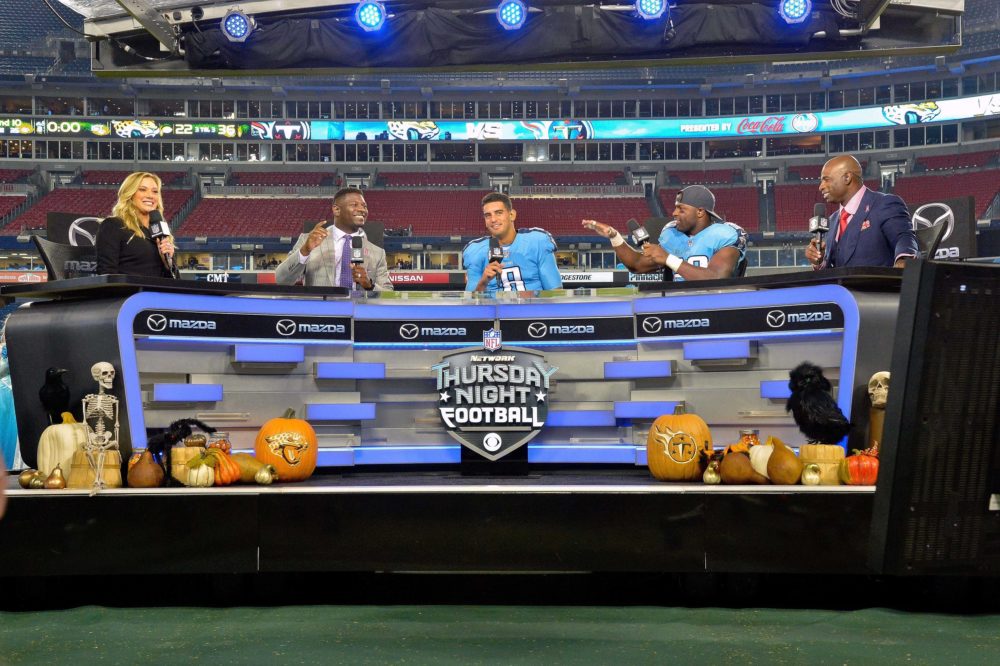 Ken Fang: For the Thursday Night Football contract, the NFL will once again do a full season of games. As the contract will be up for bid among the networks, CBS and NBC will be the ones to beat, but now that Fox has sold its entertainment assets to Disney, it will be on the lookout for more sports.

As CBS feels TNF has eroded its Sunday afternoon ratings, it will be reluctant to bid on the rights, and Fox will take over the first half of the season with NBC retaining the second half.

The NFL will include the four Sunday morning London games that will air exclusively on NFL Network in the package to sweeten the pot.

Ben Koo: I’m going to double down on John Ourand’s prediction that Amazon will acquire Fox’s broadcast network and Fox Sports. Rupert Murdoch couldn’t include those assets in the deal with Disney for due to regulatory concerns, but I’m confident he would have if he could. If he’s soured on the sports regional networks, I’d have to think he has a similar disposition to the broadcast network, FS1, FS2, and the ghost town FoxSports.com website.

As Ourand stated, there would certainly be interest from many different suitors as this gives anyone a massive boost of relevancy. However, Amazon seems the most ambitious and in the best position to make such a bold move and more importantly, it makes the most sense for them given what their current ambitions are.

This would catapult Amazon to being ESPN’s biggest competitor and really their first legitimate threat this centurary. Fox thought they could make a run at ESPN, and while on some fronts they made progress (Big Ten rights, soccer), they failed miserably on so many others (digital, fantasy, news and highlights, debate, etc). They are facing the same economic pressures ESPN is with cord cutting and rising rights fees, and the only person with a real vision for the network’s original programming was fired over the summer (Jamie Horowitz) with no replacement yet named.

When the Disney deal is approved, Fox will look to exit before the headwinds of traditional television and cable get any stronger and when that happens, Amazon will be best positioned to breathe fresh air into Fox and Fox Sports.

Joe Lucia: For all of the talk about how ESPN’s massive new NBA rights deal is hamstringing the company, I think this is the year where that deal finally starts to pay off in spades. So far this year, we’ve seen the league’s viewership spike on ESPN, with Christmas Day ratings also showing an encouraging bump. Last year’s overall playoff ratings were down, but the NBA Finals did pretty well overall (and were tremendous in 2016). This year, I’m predicting that the NBA on ESPN finishes up double digits (though a caveat here – this season’s viewership is based on Nielsen’s total audience metric, combining TV and streaming viewer), the Playoffs as a whole are up double digits from 2017, and the Finals are up from 2017 (though they won’t be able to reach 2016’s incredible numbers).

Alex Putterman: I hope I’m wrong on this one, but I fear the wave of layoffs we saw across sports media in 2017 will continue — and maybe even accelerate — in 2018. For the most part, cuts at ESPN, Fox Sports, Sports Illustrated, Yahoo, and others did not result from issues specific to those networks and publications. They resulted from industry-wide trends that don’t figure to reverse themselves. Viewers won’t suddenly ditch their streaming services and return to linear television. Advertisers won’t wake up one morning and decide they again prefer print to video. Venture capitalists (probably) won’t abruptly resume sinking money into properties with no clear plan for monetization. Facebook won’t all at once stop acting as a pernicious middle man between content and consumers. American media faces some serious structural problems, and things might get worse before they (if they) get better.

Like everyone else in this industry, I have my fingers crossed that media companies got all their layoffs out of the way last year, but logically, I can’t find much reason there won’t be more to come.

Matt Yoder: My prediction is based around something that has gotten a surprisingly low amount of buzz – the 2018 Winter Olympics. NBC will set a new record low for Olympic viewership for Pyeongchang 2018. Ratings have been dropping for lots of sports across the board from the NFL to NASCAR and Sochi 2014 was down considerably from 2010 and 2006 as well. The 2018 Winter Games has a couple important things working against it from a television viewership standpoint.

First, the 14 hour time difference to the east coast is a nightmare for seeing anything interesting happen live. It’ll be 10 AM in Korea when NBC starts primetime coverage, which means tape delay will win the day once again. (Note: NBC says, “There will be more live hours of Winter Olympics coverage in PyeongChang than ever before, and for the first time at a Winter Games, NBC will broadcast live across all time zones to the entire country.”) Second, one of the major attractions of the Winter Olympics is a complete non-factor with the NHL keeping players at home for the Olympic hockey tournament. Honestly, the biggest story around this year’s Olympics might just be the insanity between Donald Trump and Kim Jong Un and the tension of having American athletes on the Korean peninsula rather than anything that happens in competition.