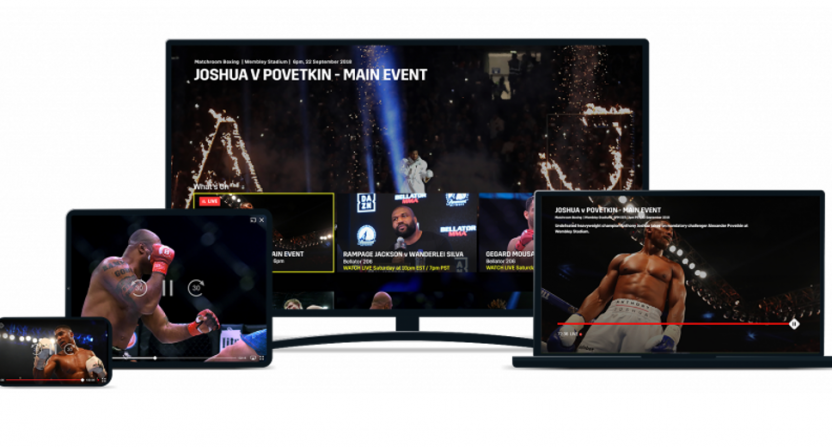 As DAZN launches its much-anticipated U.S. product on Monday, prior to the opening card of its fight sports package deal in conjunction with Matchroom boxing and Bellator MMA on Sept. 22, the platform unveiled its plans for programming content surrounding these weekly events.

In a one-on-one presentation at parent company Perform Media’s Lower Manhattan offices Thursday afternoon, DAZN director of product Marcus Parnwell and director of programming Scott Woodgate discussed the concepts behind their programming strategy prior to the market entry of the package. It will cost $9.99 per month, around the cost of packages from streaming giants like Netflix and Spotify. (And also Mike Francesa’s Mike’s On app.)

“OTT and DAZN are all about live,” Woodgate told Awful Announcing. “The content strategy here differs a little bit from the other regions, because there’s gaps between events in fight sports, and we need to fill those gaps with various shoulder programming, which we’re looking into.”

DAZN will work on different forms of content on different platforms, using data and user feedback, with planned features on fighters from their boxing and MMA main events and undercards. Mobile is all about short-form, “snackable” content, Parnwell told Awful Announcing, with highlights and knockdowns the priority there. Tablets are more about personal short-term viewing, according to Parnwell, while “TV is kind of where the big action happens.”

DAZN recently opened up a base production facility at the Brooklyn Navy Yard and have hired producers, writers and a staff to draw up that original native content. They’re still looking for more.

DAZN’s most newsworthy hires haven’t been made official yet, but Brian Kenny, Sugar Ray Leonard and Michael Buffer are all rumored to be on board for the Matchroom boxing coverage. Those announcements will likely be made next week, including the names of people who will be part of their shoulder content to go along with the matches and the archives.

Woodgate describes the content they’ve already filmed and produced as “fly-on-the-wall type stuff” with the fighter, along with his support staff, prominent in every feature.

“In fight sports, none of these figures are without a team behind them,” Woodgate said. “We think that’s a strong story to tell.”

Longform stories are on DAZN’s radar, and is something they plan on being “very active in,” per Woodgate. Different forms of content will be found on the platform as the launch progresses.

“The magic of OTT is the fact that we don’t have to stick to a certain format,” Woodgate said. “We don’t have to stick to the 22 minutes [of content], eight minutes of commercials. So we know through our data how long and how much people want to consume various genres. And I think we’re going to apply those as we go here and find what fight fans want.”

DAZN will look to not only introduce new talent to its stable of hosts and analysts, but also an opportunity to introduce fight fans to emerging contenders and how they made their way into the boxing and MMA scene.

“We think the fans, that’s one of the things we think they want,” Woodgate said, emphasizing narrative.

DAZN’s archive of Matchroom and Bellator matches will be up and running on Monday, with classic highlights and full fights, which will be constantly changing based on upcoming events.

Woodgate said that users in the other countries where DAZN is up and running– including Canada, Japan, Germany, Austria, and Switzerland— people like catching up on a fighter’s previous matches prior to a big card, “but also we’ll be cutting highlight packs for all these fights.” Parnwell said the catch-up fights really recede two or three days after an event, then it becomes more highlight centric.

When Awful Announcing was given a sneak peak at the DAZN fight package, one of the featured archived videos was a full fight between Anthony Joshua and Wladimir Klitschko, leading up to Joshua-Alexander Povetkin on the 22nd. Relevant fights leading up to Bellator 206 were also up there.

“What we’re trying to do is provide some context to the archives that we’re getting,” Woodgate said, “instead of just throwing it all up there.”

As for the presentation of the actual matches and fight cards, DAZN said its tone will be a little different from its competitors. DAZN won’t air commercials unless it’s contractually obligated to do so. And when they can, they’ll use content or features to fill the time between rounds.

“Our real goal is to engage with the fight fans when it comes to building around our live events,” Woodgate said.

For its Bellator MMA cards, Paramount Network will have control over 15 of the 22 annual telecasts. In the seven exclusive to DAZN, that’s when you’ll see some additional experimentation with camera angles and behind-the-scenes looks.

For Joshua-Povetkin this month and their fight nights in October, DAZN will be on site with a full slate of content during fight week, Woodgate said, including pre- and post-fight shows. That’s a change, as Perform Media CEO Juan Delgado said DAZN wasn’t interested in those when Awful Announcing spoke with him in June in coordination with the announcement of the Bellator deal.

DAZN will also try to work data and metrics into its telecasts, including graphs and wearable technologies, Woodgate said, with a lot of those elements featured in the post-fight shows to supplement and enhance the traditional analysis. Those elements will be fully introduced for the first time in their Oct. 6 card, Woodgate said.

“Can we predict the outcome of a fight using data?” Woodgate asked. “We’re going to go down that road and try to ask and answer some of those questions.”

DAZN seems to have pretty ambitious plans to put its imprint on fight sports in the U.S. and to parlay that into rights deals for the major American sports down the line. And if things don’t work right away? Woodgate said that DAZN won’t hesitate to admit it was wrong and adjust accordingly.

“We’ve learned that listen, if something doesn’t work, we’ll change it. And we’re not gonna stick with it,” Woodgate said. “We know pretty immediately whether it’s working or not, and we can change things.”

For DAZN, Monday starts its entry into the American market. And it’s making a big bet that what the OTT service has planned for fight sports will work in a huge way.