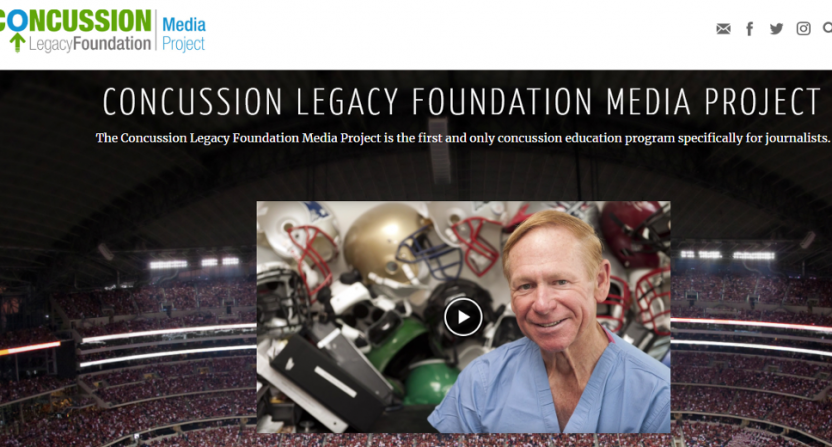 Concussions are becoming a more and more important media topic, including reporting on in-game concussion protocols, return-to-play protocols over weeks and months, and the long-term effects of the injuries. And the Concussion Legacy Foundation is hoping to help improve the reporting on concussions with the new Concussion Legacy Foundation Media Project, officially unveiled in a press conference at the Fisher Center at Syracuse’s New York City campus York Thursday.

Here’s a video they put out announcing the initiative:

The project aims to educate both professional journalists and college journalism students on the best practices for reporting and commenting on concussions, both in keeping up with current research and terminology and in informing the public (and particularly families in youth sports who don’t have a lot of information on concussions) about possible signs of a concussion and proper treatment procedures. Professional journalists can take a free test (over the computer or the phone) on their knowledge of concussion coverage, which comes with explanations of why answers are correct, and can receive certification once they get every question right.

The program is also going into top journalism schools across the U.S., with three-hour workshops for students in journalism classes run by Northwestern’s J.A. Adande, Boston University’s Andrea Kremer and Syracuse’s Olivia Stomski so far, and more on the way. Adande spoke to Awful Announcing this week about this program, and said it was a natural fit for his classes.

“They reached out to me, they thought of Medill (Northwestern’s Medill School of Journalism) and Syracuse and the other schools that were part of the project, and I was very excited to be considered. This is something that I think is important and something I’m proud to have Medill associated with. There wasn’t much of a sales job that needed to be done. …I’m really honored and pleased that they considered us to be one of the pilot members of this program.”

He said this is a vital step considering the stakes with concussion reporting.

“You could say the future of the most popular sports entity in the United States is at stake, and our graduates very well might be the ones telling that story one day. So it’s really important that they present it accurately, use the proper terminology. Because we’re veering a little bit out of our area of expertise and talking about medical conditions that most people might think they know, but aren’t aware of really what a concussion is, for example. What the process is like, how they’re diagnosed, what the league procedures are. [There are] so many things that are so important to telling the story, and it’s really important to get all these things right.”

Adande added that the stakes don’t just concern the NFL or major college players reported on, but also the readers who have to consider the risks of participating in certain sports for themselves or their children.

“You’re affecting parents and children, and their ability to determine if this is something they want to be participating in. They should be armed with as many facts as possible.”

The project has already run two workshops at Northwestern, and Adande said they went well and helped improve his students’ understanding of concussion reporting.

“I thought they were great. [Concussion Legacy Foundation program coordinator] Brandon Boyd came in and we did two versions; one was an abbreviated version and then he did the full version for my undergrads. I think it was effective; my students tended to get the answers right on the test I gave them afterwards. They were given a pre-test to kind of prime them before the session, and I had a few questions on my midterm exams, and they did really well on them. So I think it shows that they effectively got across the points they were trying to make.”

Adande said the program seemed to go over well with the students, too, with a visit from former Northwestern and Chicago Bears player and former sports broadcaster Mike Adamle (who’s battling long-term medical issues ascribed to the concussions he suffered as a player) proving particularly impactful.

“I think they’re appreciative, I think they absorbed the knowledge. In the case of my graduate students, it was particularly emotionally resonant, because  Mike Adamle came in and spoke to them about his experiences and what he’s going through, dealing with the aftereffects of all the concussions that he suffered in the course of his playing career. For them to visibly see his condition and hear from him and have him explain just how serious this is, I think that really resonated. I don’t think it’s something they’re going to forget.”

Adande said he’s always tried to cover injuries to some extent in his journalism classes, but concussions are perhaps even more vital for students to understand properly.

“I used to have an injury segment in my sports and public relations class that I taught at USC…I always thought it was important for them to know the difference between a strain and a sprain, for example, the various degrees of a ligament tear and some things like that, but this is even more important.”

He said he expects to be using parts of this program for years to come.

“I can definitely see this being a component, and the great thing is, they’ve established a template. So we can be consistent, we can be accurate, we can be informative, and this should be something that will be a staple of my sports reporting classes and commentary classes. And it should be easy to update as well with any additional developments that come in.”