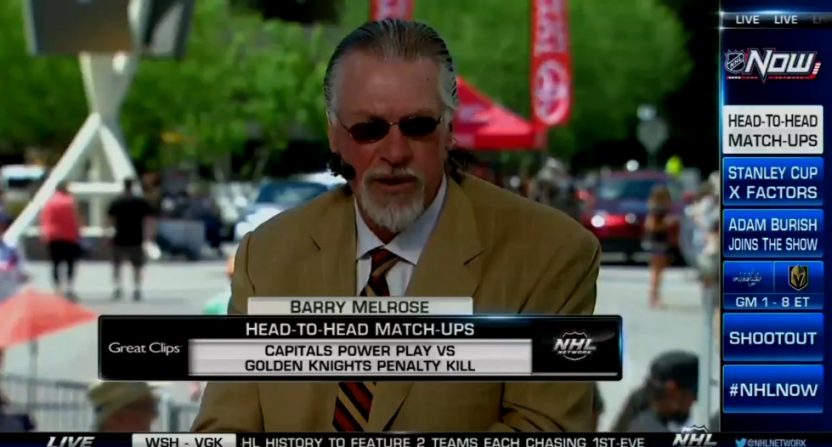 NHL Network is doing extensive on-site coverage of the Stanley Cup Final, with NHL Now, NHL Tonight, and pre- and post-game shows on game nights, featuring a lineup of analysts that includes E.J. Hradek, Mike Johnson, Brian Lawton, Barry Melrose, Mike Rupp, and Kevin Weekes. Melrose in particular is interesting, as he rejoined NHL Network this season (he previously worked there from 2011-2015) while retaining his ESPN role. He spoke to Awful Announcing Tuesday after Monday’s crazy Game 1 in Las Vegas to discuss the local atmosphere, the matchup between the hometown Golden Knights and the Washington Capitals (which resumes tonight at 8 p.m. Eastern on NBCSN), and what it’s like covering the Stanley Cup for both NHLN and ESPN. Melrose said working for both networks has been great so far.

“It’s awesome. I’ve got a lot of friends at NHL Network that came over from ESPN, so when I work for NHL Network, it’s basically like working for ESPN. The people I love, the fact that hockey’s the number-one sport there…obviously at ESPN, it’s a gigantic sports station, and sometimes hockey gets lost when some of the other sports are on. It’s nice to do some stuff where hockey’s number one every night. And I get to talk about hockey on another network with more shows. I love doing it, I love talking hockey, and I love talking hockey with people that talk hockey, so it’s been a good marriage, a fun marriage for me.”

He said it’s been excellent being on site, as that allows for a different perspective than you get watching games on a screen.

“The arena gives you the feeling you can’t get on TV. TV can show you the systems and the replays and stuff like that that are great, but you can’t capture the buzz, the excitement, the noise, the seats shaking because of people stamping their feet, the smell of the ice, the feel of the frozen ice coming up in your face. You can’t get that unless you’re there in person. It’s always fun going to the Final, me and Steve Levy (at ESPN) and doing the Final, it’s great.”

The Golden Knights took their pre-game celebrations to a new level Monday night, and Melrose said he’s a big fan of their opens.

“I love it. I make sure when I’m watching the [Vegas] games, even in studio, I make sure I get there in time to watch the open, because the open is better than most hockey games. I enjoyed the open, I had a blast, a little bit of juggling, a little bit of laughing, a little bit of amazement. And then they bring out Michael Buffer last night, so that’s an added thing. Everything they do, they try to spice it up a little bit better and it works. It’s where entertainment meets sports and it’s a pretty good deal.”

Vegas sure knows how to put on a show! ? pic.twitter.com/v2uGfgJ7r8

He said the excitement around the Golden Knights is palpable in Vegas.

“It’s great. Everyone’s got jerseys on, every store is selling Golden Knights stuff, memorabilia is everywhere. Anything they can put a jersey on, they’ve got a jersey on; statues, buildings, it’s crazy. And everyone’s talking hockey. And taking pictures, we’re at the Bellagio here and they have this 70-pound chocolate figurine of [Golden Knights goalie] Marc-Andre Fleury, everyone’s taking pictures of that. It’s going over great. I’ve been to every Stanley Cup since ’93, and this is as good as any of them. Hockey areas, non-hockey areas, whatever you want to say; the buzz here in Vegas is crazy.”

The Golden Knights have made an incredible run through the playoffs, giving us maybe the best showing of any expansion team in the biggest four North American sports and setting up big potential losses for the sports books. Melrose said he was surprised they were this good this fast during the regular season, but that regular season performance meant this playoff run hasn’t shocked him.

“I think I was past surprising when they finished first in their conference. To do that in the Western Conference, a graveyard of teams that have won the Stanley Cup, Chicago, the L.A. Kings, the Ducks, San Jose just went to the Cup not that long ago, and they chewed up everybody. So I’m not surprised by this team any more. This is a great hockey team, it’s not a carnival act, it’s not a question on a game show. This is the real deal. They won last night, they’re three wins away from the Stanley Cup, they’re one of two hockey teams left playing in the world. When you’re one of two hockey teams left playing in the world, you’re a pretty good club, and Vegas is a pretty good club.”

But the Golden Knights are facing another solid team in the Washington Capitals, a team that’s been very good for the past decade but never advanced to even the conference finals. Melrose said this year’s Capitals’ team may not be the most impressive Washington’s fielded on paper, but it’s come together more effectively.

“The surprising thing is that they haven’t been here before. This is not the best team they’ve ever had, or, I should say, it’s not the most talented team they’ve ever had. It is the best team they’ve ever had. They play hard, physical, they’ve got great special teams, [Braden] Holtby’s been very good in net, Ovi’s playing great, Backstrom’s playing great, [Evgeny] Kuznetsov’s emerging as a superstar, John Carlson’s had an unbelievable year on defense. This team from Washington is an excellent hockey club, and obviously this series isn’t going to go four games. It’s going to go a lot longer than that. Washington probably should have won that game last night. The good news is they probably should have won it, the bad news is if you let Vegas win a game where they weren’t very good, that’s a scary thing.”

The @Capitals power play vs. the @GoldenKnights PK. Schmidt vs. Ovechkin. Tuch vs. Wilson.@NHLBarryMelrose and #NHLNow break down the head-to-head #StanleyCup Final matchups. pic.twitter.com/s2O1WVpq0E

Game 1 saw the Golden Knights take a 6-4 win, but barely, with Washington narrowly missing an open net near the end. Melrose said Game 1 had plenty of mistakes, but it was entertaining, and it stood out for the Golden Knights’ speed and for their penalty kill.

“The speed in Vegas, they’re quicker than the Caps, they’ve been quicker than everybody. Their special teams were very good, the Caps only had one power-play chance, but it was handled pretty easily by Vegas, and the Caps’ power play is one of their real weapons. Fleury wasn’t great, but he was great enough to win and that’s all that matters. It’s going to be a great matchup. It was tied going into the third period, that’s all that you can ask for if you’re a hockey fan. We had goals, we had hits, we had some good plays, we had a lot of mistakes, which usually makes for excitement, and that certainly happened. It was an entertaining hockey game, but if you’re a hockey person, it wasn’t played that well.”

Melrose is also involved in another NHL Network production, the latest installment of their NHL Network Originals documentary series. This one, Picture Perfect: The 1992-93 Season (which will premiere Friday at 8 p.m. Eastern), marks the 25th anniversary of a remarkable season, and Melrose plays a significant role; that was when he was coaching the Wayne Gretzky-led Los Angeles Kings, who went to the Stanley Cup Final but lost in five games to Patrick Roy and the Montreal Canadiens (which also marks the last time a Canadian team won the Cup). Melrose is one of many figures from that season interviewed at length for this doc (others include famed Kings’ announcer Bob Miller, former Kings’ forward Luc Robitaille, and former Canadiens’ forwards Guy Carbonneau and Kirk Muller), and he said while he loved his time with the Kings overall, he’s still unhappy about how that series played out.

“My memories are so good, but when I remember that series, it’s not with fondness, obviously. I’m proud to be involved in one of the great series ever played. It was a fantastic time. We thought we were going to win the Stanley Cup. We didn’t get the job done, and I’ll remember that the rest of my life, but I was able to coach a great group of guys, and I’ve stayed friends with all of them for 25 years. But it’s a bittersweet memory, that series.”