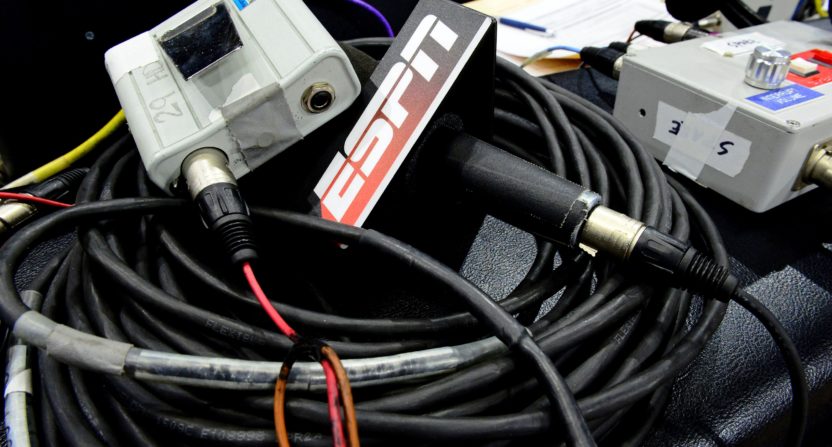 Layoffs decimated the sports media world in 2017, whether it was outlets becoming more “versatile,” “pivoting to video,” or openly firing a bunch of people to save money. Neither talent nor hard work gave one immunity, nor did having a contract renewed months beforehand. You could even get the boot while receiving an award for decades of excellence.

None of these layoffs hinted at an industry retooling for a vibrant, prosperous future. It felt like a sick game of musical chairs. Even those who found a seat in 2017 won’t feel confident about 2018, much less 2020 and beyond.

Hoping to weather the inevitable over the next 12 months? Here are some tips, if tips can even be offered with such an arbitrary process.

We are all judged by performance metrics. Tightening budgets stress efficiency. The fastest way to make yourself expendable is to accept a position where you get paid more to do less work. If you have a stable job, jumping to the more prominent outlet or the pay/prestige bump is not the no-brainer decision it once was (or still would be in most other fields). Hitting the sweet spot is being very productive in metrics and moderately underpaid.

Fixing an extant website is hard work, and you won’t get all the credit if there is credit to bestow. How do you get around that? Plow resources into a new website. Every outlet wants to show growth. Guess what? A vertical in its first year will show growth over the nothing that came before and you get all the plaudits for it. That should buy you 18-24 months to think up another vertical.

Unitaskers are in trouble, especially if that one task is writing. How do you get more “versatile?” Start a podcast. Podcasts are trendy because a few make big money. No one quite understands how the metrics work. You probably won’t reach the promised land of Blue Apron and MeUndies ad reads. But, starting a podcast, even if no one listens, makes you more versatile than if you didn’t start one.

Wright Thompson quit Twitter. So did Ta-Nehisi Coates. Both are off to the promised land of being less agitated and more productive. Leaving is a good deal, if you have a well-established brand or work for one like ESPN. If not, Twitter will be a necessary evil. Your popularity on “social” may have nebulous utility at your present position. But, it may be the operative reason you find another one. If the paid subscription model is the future, your value comes through your ability to push subscriptions.

Don’t Try To Be Funny

Social media is an accelerant. Norms, boundaries, and accepted practices move faster than society can digest them. What was edgy in 2016 or 2017 could be beyond the pale in 2018, not to mention that now cringe-worthy joke lingering in your archive from 2012. Don’t risk your livelihood for likes, snickers, and retweets. Stick to common GIFs and memes disseminated incessantly by social media tastemakers. Safety in numbers and tedium.

Stop Creeping on Women at Work

Media success breeds personal delusions. A major one is conflating power and influence with charisma and sex appeal. That intern finds you witty and charming? She’s obligated by the power dynamics of the situation to do so. Your younger colleague wants to meet about career advice? She may just want career advice. Don’t make uncomfortable jokes. Don’t touch anyone. Don’t send shirtless pics, even if you have started doing cross-fit. No one wants to see pictures of your penis.

Have ESPN or SI on Your CV

Jobs will be few. Quality candidates will be many. There’s no incentive for those hiring to take any risk. Moving down will be easier than moving up. Having a “blue chip” media outlet on your résumé guarantees nothing. But, it can’t hurt. There are worse fates than being an on-air talent stuck in purgatory while your lucrative ESPN deal runs out. The Chief Content Officer at the one site doing significant hiring is a former Editor-in-Chief at SI.