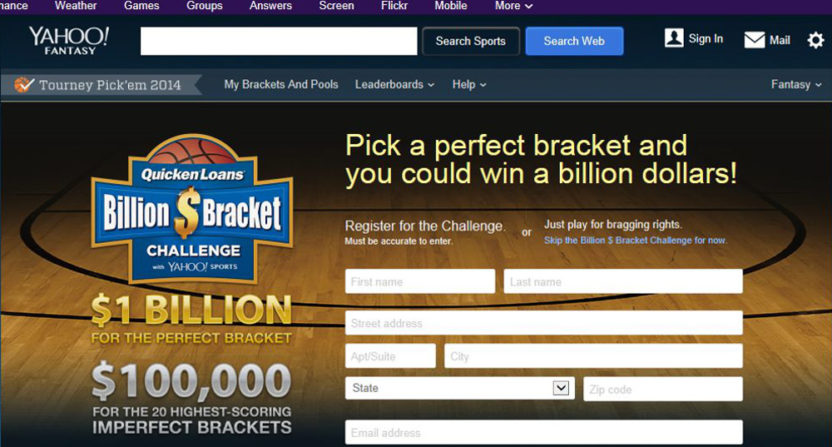 Yahoo’s “Billion-Dollar Bracket” NCAA tournament promotion has been the subject of litigation from SCA Promotions for a while, and after Yahoo won the first round, an appeals court has ruled in SCA’s favor. At issue is an $11 million contract signed with SCA to create the contest in 2014. SCA went looking for insurance coverage for the grand prize, while Warren Buffett’s Berkshire Hathaway and Quicken Loans created their own $1 billion prize, and Yahoo dumped SCA to sign on with them. SCA says they’re entitled to half of the contract in event of cancellation, while Yahoo disagrees.

There’s also substantial debate about if Yahoo or SCA came up with this prize, with SCA president Bob Hamman saying he and Buffett initially conceived it over a bridge game, went to Yahoo and were turned down under the 10 million user cap Buffett wanted. That led to SCA striking a separate deal with Yahoo, Buffett striking a separate 15 million user deal with Quicken Loans and founder (and Cleveland Cavaliers’ owner) Dan Gilbert, Yahoo ditching SCA for the Buffett/Quicken deal, and SCA filing a lawsuit, which killed the contest.

Yahoo’s key argument was that SCA improperly leaked contest details to Berkshire in the search for insurance, invalidating the contract. They received some support for that position from a lower court, which ruled that SCA had to return half ($550,000) of thes $1.1 million deposit they received. However, the 5th U.S. Circuit Court of Appeals in New Orleans reversed that decision and ruled in SCA’s favor Monday:

The 5th U.S. Circuit Court of Appeals in New Orleans said SCA Promotions was entitled to half of its $11 million contract with Yahoo as a cancellation penalty.

…”Any information that SCA disclosed to Berkshire Hathaway was not confidential information,” Circuit Judge Edith Brown Clement wrote for a three-judge panel.

Because SCA had kept Yahoo’s $1.1 million deposit, the appeals court on Monday awarded it another $4.4 million.

The decision reversed a lower court ruling ordering SCA to return $550,000 of the deposit to Yahoo.

“It has been a long battle over what we thought was a simple contractual provision,” Jon Patton, a lawyer for SCA, said in an interview. “We’re pleased the court of appeals got this right.”

Here’s a look at how this legislation developed, from Slate’s Jordan Weissman back in 2015:

SCA’s president, Bob Hamman, plays bridge with Warren Buffett, whose Berkshire Hathaway also happens to insure these sorts of long-shot promotions. In their version of the story, told to the Wall Street Journal, the two men thought up the billion-dollar bracket during a lunch. They eventually approached Yahoo, which is, as we all know, a glorified fantasy sports portal, to put on the contest.

Sadly, the parties hit an impasse. While the odds of anybody actually filling out a perfect bracket were microscopically small, Buffett was concerned that if tens of millions of fans signed up, those chances would rise just a bit. Thus, he wanted Yahoo to pay him an extra premium for every additional participant after the first 10 million. The sides deadlocked, and Buffett walked away, leaving SCA to strike its own deal with Yahoo.

Later, according to the WSJ, Buffett ran into Quicken Loans founder and Cleveland Cavaliers owner Dan Gilbert at an event in Detroit. The two chatted, and decided to sponsor the bracket challenge together, with a cap of 15 million contestants. In the end, Yahoo hosted Buffett’s version on its site, dropping SCA.

This is where things get dicey. In its lawsuit, SCA claimed it signed an agreement with Yahoo to run its own billion-dollar bracket competition; according to SCA, the contract required Yahoo to pay half the insurer’s $11 million fee in the event of a cancellation, but the company refused to do so.

Yahoo responded with a countersuit that offered an opposite narrative. The company claimed that the billion-dollar bracket was its own brainchild all along, and that it approached SCA to help find another underwriter that could insure the hefty prize. According to the suit, SCA was subject to a strict confidentiality clause requiring them to keep mum about the precise details of the contest, which it apparently violated during talks with Berkshire about acting as an underwriter.

So, for the moment at least, SCA has emerged victorious. And this is potentially interesting on the sports media side not just because of the bracket contest (which was very popular before it was killed), but also due to possible implications for Yahoo. Yes, $5.5 million isn’t a huge amount in terms of that company’s overall finances; Verizon closed their acquisition of the firm for $4.5 billion this June, or 818 times this amount, and that was $350 million less than they’d initially offered thanks to the earlier data hack. The company also paid former CEO Marissa Mayer $23 million in a “golden parachute” exit deal.

However, this is a company that’s seemingly been more budget-conscious recently. They announced 2,100 layoffs at Oath (the new, integrated Yahoo-AOL-Huffington Post content brand) after the Verizon takeover, and we’ve seen lots of those on the sports side, some even before that integration. It’s unclear if a promotional/fantasy contest like this is connected to what Yahoo spends elsewhere on sports, but the $5 million swing here is certainly notable for the company. We’ll see if there are any further developments on this front.