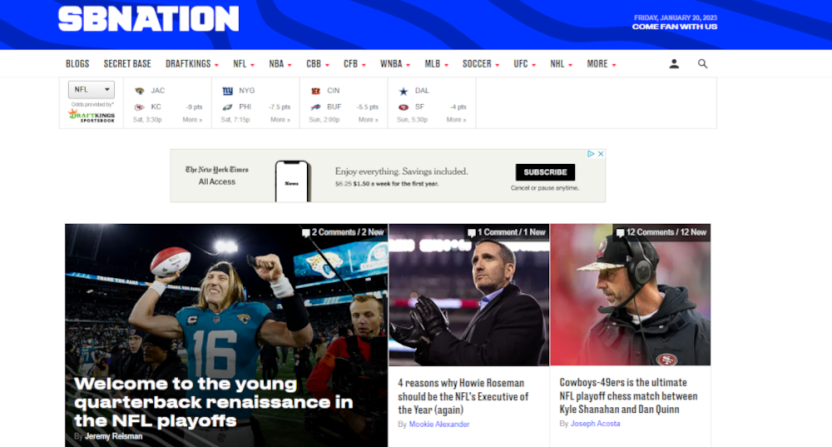 SB Nation parent Vox Media has announced another round of layoffs and cuts, and once again, there’s a heavy impact on the sports side. Here’s the company announcement of the cuts, which came with a note that affected people would be emailed in the next 15 minutes, and with blame on “the economic climate”:

Vox Media is laying off 7% of its staff, CEO @Bankoff tells employees in a memo. pic.twitter.com/Tc52JXcIWC

Here is the Vox union’s response:

We were informed today that the company is laying off around 7 percent of its workforce, and some of our members have been impacted.

We're furious at the way the company has approached these layoffs, and are currently discussing how to best serve those who just lost their jobs.

There has not yet been a full description of exactly what these cuts entail on the sports side. But there do appear to be a lot of impacts for those covering hockey and soccer (both men’s and women’s, for both sports) in particular, with some employees let go and support for many sites fully cut. And there are some impacts elsewhere too, including social teams and podcasts across many sports. Here are a few of the many tweets from people impacted:

Today I have been laid off. I always thought I would leave Vox and SB Nation of my own accord, but today they chose to move away from hockey coverage.

I don't know what is next for me, I'm a little shellshocked tbh, but here we are. Steph Driver is on the market. https://t.co/Ncg3cZzlsX

Well, to this point I've dodged the emails and calls but apparently my luck has run out. My time at Vox has come to a close.

I have been extraordinarily blessed to head the pod team @LakersSBN, a site I've helped grow into the monster it is today.

i was part of today's layoffs. we did a lot of good shit in my 5+ years at sb nation and i'm really proud.

social teams do so much more than people realize. they truly have their hand in every single part of a company. invest in your social team, then trust and believe in them. https://t.co/CDuHsRlTY2

I've been let go by @SBNation / @voxmedia after 7+ years.

SB Nation had all-world talents throughout those years and it still does. I’m just happy to have played a small role in it.

Woke up to an email that I’m part of the layoffs at Vox. Shout to my amazing coworkers @hmfaigen @PaulHudrick @AnthonyIrwinLA @BradyKlopferNBA @StatsOnFire the rest of the team and crew @Liberty_Ballers looking forward to what comes next!

Yup, got laid off today. Gonna miss working with all the talented folks at @secretbase but I know they'll keep kicking ass.

Not sure what's next! But if you wanna chat about something, email me at ryan.nanni@gmail.com

Hi folks. @TheIceGarden is on the list of sites that will no longer be managed and monetized by Vox Media. That means our contributors are no longer being paid.

I am at my day job. I'll be figuring out what we do at TIG for next steps as soon as I can. I'm gutted. https://t.co/7fSDx6CBA9

Hey fam. Kelly here. Just needed to say a couple of things. As you now know, Vox Media has decided to no longer support the existence of Broad Street Hockey. Why? Can't tell you.

I honestly don't know what this means. For the site. For our writers. For me. I don't know.

All we know at the moment is that our contracts run through the end of February and we'll keep chugging along until then.

After that … who knows? https://t.co/UT4C2cOWGX

Don't have the time to write something up this morning, but we echo the same thoughts & feelings as WIIM along with the same uncertainty of what comes next. https://t.co/KS7BUlWwKc

The two most popular days for traffic in EOTP history just happened to be last July. We set a record on Day 1 of the 2022 Draft and Day 2 of the Draft was better than any day except the previous day.

I stole this though… pic.twitter.com/lGTwMO5Z8f

Ironically on that day, we were the top overall sports site on @SBNation. Even that wasn't good enough for some reason.

Y’all are saying really kind things and we truly appreciate every single one of them. But a) we’re not dead yet, and, more importantly, b) those things will not prevent me from torching you when we are if you ever got on my bad side.

If you’ve seen the SB Nation/Vox news today, you won’t be surprised to know it’s impacting @rslsoapbox too.

That said, I know I’m not done yet, and I know there are others among our staff that aren’t either. We’ll have updates as we’re able.

We have been made aware that VOX (which owns SB Nation) will no longer support MLS sites due to the economic climate. We are not sure what this means going forward and are working behind the scenes to figure out what's next. https://t.co/xVi7QjLkjc

Yes, it does impact @BigDSoccer. I don’t have the full details, but thankfully, I can say we’re not done covering #FCDallas. I’ll have updates on what it all means as soon as I can.

However, some hockey sites appear to have survived:

To be clear, none of the hockey sites should have been shut down. But not only was Vox's decision heartless, it also was completely nonsensical from a business standpoint.

It’s difficult to get an accurate picture of what exactly is changing with SB Nation at the moment, and where exactly Vox’s sports coverage will go from here. But it is clear that a lot of prominent SB Nation employees have been let go, and a lot of prominent sites are, at the very least, losing their Vox/SB Nation affiliation. Our thoughts go out to all of those impacted.