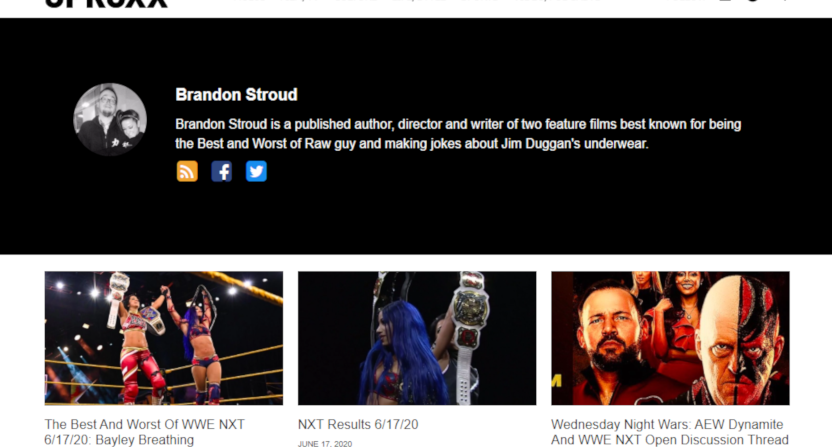 Since 2014, Uproxx’s “With Spandex” vertical has been a prominent source of wrestling coverage, and Uproxx’s wrestling coverage dates back well before that; previous Uproxx sports site “With Leather” incorporated a lot of wrestling coverage as well. A good part of that has involved Brandon Stroud, currently the With Spandex editor-in-chief. Stroud has a long history of involvement in wrestling (including time as an announcer for independent promotions) and in sportswriting (including time at Progressive Boink and its spin-off “The Dugout,” which he founded alongside Jon Bois and Nick Dallamora.) But the wider #SpeakingOut movement about sexual assault and sexual harassment in wrestling has included several allegations about Stroud. And as per With Spandex writers Scott Heisel, Elle Collins, and Emily Pratt, that’s led to Uproxx suspending the vertical.

Update: Uproxx finally confirmed that suspension of the vertical in a statement issued June 30, more than a week after their writers discussed the vertical’s suspension and two weeks after initial accusations against Stroud emerged. Here’s that statement in full:

Recently, allegations of inappropriate behavior by one of our employees came to our attention. We are deeply disturbed by these allegations. We condemn discrimination and harassment of any kind. There’s no place for it in our business.

Our original post on this continues, first with the tweets from With Spandex writers about the vertical’s suspension:

So! A couple of things to address:

1. My editor in chief at @WithSpandex was one of many people named by the pro wrestling community #SpeakingOut.
2. As such, the vertical has been suspended until further notice.
3. There is supposed to be a public statement from @UPROXX soon.

I don't know when wrestling coverage—written by me or anyone else—will return to Uproxx. We've been told that an official statement is coming soon.

I hope to keep writing and/or editing for Uproxx, but whether that will be about wrestling or another topic remains to be seen.

heyyyy so some updates
– i don't know when there will be more wrestling content on uproxx / with spandex
– there should be a statement from uproxx about all this soon, so that's everything about the state of with spandex from me for now!
as far as specifically my writing…

Those tweets were sent Tuesday, but as of Wednesday night, there doesn’t appear to be an official statement on this from Uproxx. But their wrestling vertical hasn’t published a post since a Friday piece on WWE Smackdown, and they tend to post both regular show recaps (so Monday’s WWE Raw is a glaring omission) and news posts (so Wednesday’s news about multiple WWE personnel testing positive for COVID-19 is a notable omission). And it certainly does appear that the wrestling site is shut down, at least for the moment. As per the allegations against Stroud, there are a lot out there, but the ones Heisel relayed on behalf of a woman who wished to remain anonymous are particularly notable:

I am sharing the following story on behalf of a woman who wishes to remain anonymous in regards to Brandon Stroud. #SpeakingOut pic.twitter.com/4XiVX3zkKq

That came after many other people levied allegations against Stroud over the past week. Here are some of those:

Brandon Stroud is a physical, emotional, and sexual abuser. Brandon co-opted a white knight feminist friendly persona specifically to lure vulnerable women to get close to him. He then took advantage of those women. Stop enabling @MrBrandonStroud , @UPROXX . Fire him.

Cleo Lune dated Stroud in the past. She discussed him publicly on the One Million And One podcast this week, and also put out a bunch of tweets about him. Here’s that podcast link:

Beyond the sexual allegations, there have been plenty of publicly-aired complaints about Stroud from Uproxx coworkers present and past, including Heisel and Bill Hanstock:

…who haven’t yet shared their stories publicly, and many details line up with those of people who have. It’s clear to me this was a pattern of behavior dating back years. I never saw it because I was never meant to experience it. My friend was a predator, and I didn’t know.

To all the victims of Brandon Stroud: You have my unwavering support. #SpeakingOut

Here’s what I have to say about Brandon Stroud. pic.twitter.com/FlXlo6SYdN

Stroud has deleted his Twitter account (a cached version is available here). But before he deleted that account, he offered a response to some allegations there last week. That response is preserved on Reddit here.

There hasn’t been a statement from Uproxx on this yet. We’ll add one if we receive it.