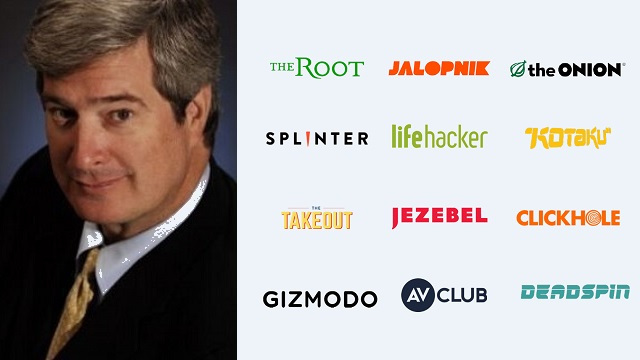 It hasn’t been a good few months of news for G/O Media, and the company is now under further fire thanks to a pair of lawsuits alleging mistreatment of female executives from G/O Media CEO Jim Spanfeller. Lauren Kaori Gurley of Vice’s tech vertical Motherboard reported on those lawsuits Friday. One, filed Wednesday in Los Angeles, comes from Nadine Jarrard (former G/O vice president of West Coast sales), and alleges gender and pay discrimination and negligent hiring. The other complaint was filed last week in Chicago by Michael McAvoy (former CEO of The Onion), and it alleges that G/O Media violated his employment contract and that Spanfeller fired him because he raised concerns about the treatment of women at the company.

The GMG union (which represents workers across the G/O Media sites) also issued a statement Friday saying they’re “unsurprised” by the allegations in these lawsuits:

Here’s more on the lawsuits from Kaori Gurley’s piece:

“It was immediately evident that the ‘new regime’ was white men, cronies from Spanfeller’s past,” Jarrard’s complaint says. “SPANFELLER had no interest in mining the company of existing talent, particularly female, but rather to bring in his old cronies from his time at Playboy, Forbes or elsewhere.”

…In early June, Jarrard learned that Spanfeller’s former Playboy colleague, Steve Thompson had been hired into her position with her same job title, and would be given half of her territory, which included all of the West Coast, the lawsuit alleges.

…Under Thompson’s watch, G/O Media brought in only $1 million of its $10 million goal during the most recent quarter, according to court documents. Twenty sales team members have allegedly parted ways with the company since April.

…McAvoy’s lawyers allege that G/O Media fired McAvoy for “raising legitimate concerns about Spanfeller’s treatment of female executives and Spanfeller’s hiring of his friends and former colleagues to replace executives.” In July, a source with knowledge of McAvoy’s firing told The New York Post of his termination, “It was an ambush. He was fighting for women who have been passed over or been replaced by older white guys.” McAvoy repeatedly approached Spanfeller about Jarrard’s complaints, and he was widely known at the company as an “advocate for women and their growing concerns about mistreatment,” Jarrard’s complaint says.

That full piece is worth reading in detail. For what it’s worth, G/O Media denies the allegations with this statement provided to Motherboard:

“These are baseless lawsuits and we look forward to responding to the claims in court where the facts will show that the company’s actions were entirely appropriate,” a G/O Media spokesperson told Motherboard. “The company has and continues to support women at all levels of seniority. Of G/O Media’s new hires since July, 60 percent have been women, many in senior roles.”

These aren’t the first accusations of troubling behavior towards female executives from Spanfeller and G/O Media. As Jarrard’s complaint notes, Deadspin’s August piece of “This Is How Things Work Now At G/O Media” (by Laura Wagner) had lots of detail on Spanfeller’s moves after taking over:

Spanfeller, a man who is regularly and perhaps euphemistically referred to in press accounts as a digital media “veteran,” has so far hired a slew of his former colleagues at Forbes.com—where he was CEO from 2001 to 2009—and Playboy—where he was a senior vice president from 1989 to 1993. These include a senior vice president of marketing who last week wrote a baffling reader “satisfaction” survey for Deadspin at Spanfeller’s behest; a sales executive who, sources say, appears unable to give an effective sales pitch; and an editorial director who repeatedly attempted to kill the reporting process for this story.

These men, and others who now hold C-suite positions at the company, were each hired without a public recruitment process, and several were installed over high-ranking women who had been successfully performing those jobs at the company for years. In one case, sources say Spanfeller did offer to promote a woman to run human resources, but on the condition she fire another woman at the company as her first order of business. (Spanfeller denies this claim.)

In conversations with Deadspin, more than 20 employees from across the business, tech, and editorial departments of G/O Media expressed frustration with Spanfeller’s approach to hiring and his new executives’ lack of knowledge about the company combined with their seeming unwillingness or inability to get up to speed. The employees, nearly all of whom requested anonymity because of fears of retaliation from company management, are angered by a lack of communication regarding company goals, seeming disregard for promoting diversity within the top ranks of the company, and by repeated and egregious interference with editorial procedures.

This adds to what has been an atrocious run for G/O Media. The company was created by Great Hill Partners back in April to oversee the sites that equity fund had just bought from Univision, which included the former Gawker Media sites, The Onion, The A.V. Club, and other sites. In August, Deadspin editor-in-chief Megan Greenwell resigned (shortly after the publication of a Deadspin story detailing numerous problems and concerning behavior at the company, and after pushback from management against that story). And some of her comments upon resignation (to Maxwell Tani of The Daily Beast) run along similar themes to some of what’s in Jarrard’s complaint:

“I have been repeatedly undermined, lied to, and gaslit in my job,” Megan Greenwell said in a brief phone call with The Daily Beast on Friday.

…Greenwell said Friday that she feels “heartbroken” about leaving and that, while she does not want to be seen as a victim, recent decisions by company brass left her with few options.

Among the many grievances, Greenwell said, G/O leadership refused to guarantee editorial independence for Deadspin and asked for the site to “stick to sports”—a long-running source of frustration for a staff that also covers media, politics, and culture beyond sports.

“That’s not something I feel I can ethically do,” the departing editor said.

Around Greenwell’s resignation, G/O Media tried to further push a “stick to sports” mandate on Deadspin and to curtail numerous employees’ concerns about annoying autoplaying ads across G/O Media sites. They then closed news site Splinter in October, and things really came to a head last week. Last Monday, G/O Media removed a Deadspin post with writers from across G/O Media expressing concerns about the ads and sent a further stick-to-sports memo. Deadspin decided to feature some of their old non-sports stories in protest after that, and G/O Media then fired Deadspin deputy editor Barry Petchesky Tuesday. That led to the rest of the Deadspin staff resigning in protest, and to a freelancer who tried to contribute to the site almost immediately regretting that decision.

That also produced a weekend of bad unbylined posts on Deadspin, and G/O Media editorial director Paul Maidment (who had been the key voice in much of the “stick to sports” language) resigned himself this Tuesday “to pursue an entrepreneurial opportunity.”  Deadspin now hasn’t been updated with a new post since Monday (the last post there is “Kellen Winslow Jr. Takes Plea Deal To Avoid Life Sentence,” from Monday at 11:49 p.m.) And G/O Media has remained under fire over their Deadspin actions, and now they’re facing criticism on a new front.