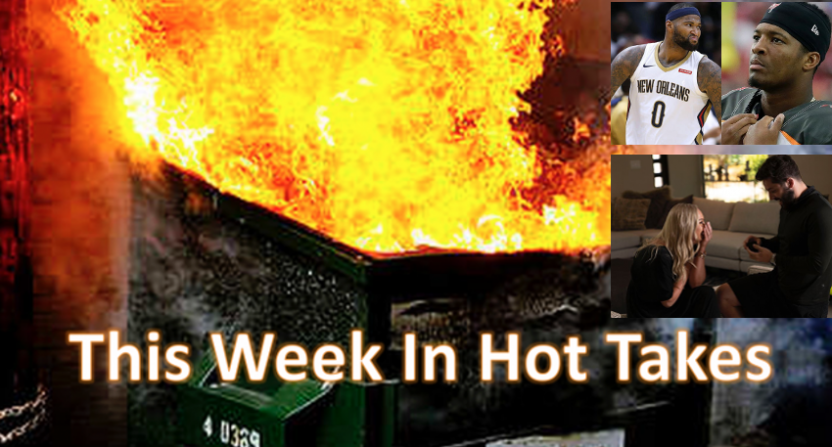 Welcome to another edition of This Week In Hot Takes! This time around, we’re breaking down all the hottest takes from June 29-July 5.

5. Darren Rovell calls miscount a “black eye” for competitive eating, argues with Justin Karp about hot dog calorie count: The annual Nathan’s Famous Hot Dog Eating Contest has been an Independence Day staple for ESPN, but it’s more of a light diversion than something that the world takes extremely seriously. Not ESPN sports business reporter Darren Rovell, though, who started arguing for tonsil monitors and got INCENSED about a miscount (which saw champion Joey Chestnut originally credited with 64 hot dogs before that tally was later increased to a record 74 after a count found two cleared plates were missed):

The counter missed a plate. They are now saying 74 is official for Chestnut, which is the all-time record. A shame it came in this way.

As I said, electronic counters need to be brought into competitive eating. I love the sport, but today was a massive black eye.

And yes, he was still mad online a day later:

Morning aftermath on Hot Dog Eating Contest: The “Bunettes” can continue to flip cards behind each eater, but they can’t continue to be the counters. Too much at stake, especially with betting on the rise.

As Rovell’s story (yes, he wrote a story on this too) indicates, sure, electronic counters are being considered (fortunately, based on plates rather than on tonsils, which just sounds disgusting). And if they go to that, fine, whatever. But the sheer OUTRAGE over the miscount (which didn’t even change who won, just by how much) is hilarious; nothing like a “massive black eye” for competitive eating!

It’s also funny that Rovell’s take seems largely based on the betting implications, which tracks with his enjoyment of sports being mostly about the dollars and cents. Calm down and have a hot dog, Darren. Although even that might not work, as he got in an even sillier and more protracted argument with NBC’s Justin Karp about hot dog calorie counts:

I’m sorry but this is wrong. Natural casing hot dogs that they ate + buns directly off Nathan’s website is 1850 carbs, but whatever fits your narrative for retweets….

Is this a natural casing + bun? Or a skinless + bun?

Glad that you showed your work. I understand how you got what you did. This is what Nathan’s is going with on its packaging. I think we need to investigate the extra carb. pic.twitter.com/A1BzCrZyuc

“Darren Rovell and The Case Of The Extra Carb” will be coming to bookstores near you soon. At least he’s aware of how he sounds, though:

A 40-year-old man with three kids who spends his time arguing about hot dog counting methods and calorie counts online. Well, glad that’s working out for you, Darren.

4. Stan Fischler argues that John Tavares “took the easy way out”: Tavares’ decision to leave the New York Islanders in free agency and sign with the Toronto Maple Leafs understandably upset a lot of Islanders’ fans, and that’s totally fair. But it also upset a bunch of New York-area media members, most notably long-time hockey writer Stan Fischler (who now writes columns for MSG’s website). As part of a larger column about new Islanders’ GM and president of hockey operations Lou Lamoriello and his acquisition of goalie Robin Lehner, Fischler accused Tavares of taking “the easy way out”:

You can expect Larrupin’ Lou to rebound from the expatriation of John Tavares to his beloved, adored and Royal-Blue-And-Whitish Maple Leafs.

Tavares couldn’t handle the Islanders challenge and took the easy way out. No problem; it was all legal. Meanwhile, Lou has been out marketing this week with some compelling returns.

It’s unclear that heading to the Leafs, who have only made the playoffs three times in the last 10 years (and are coming off a pair of first-round exits), is a real “easy way out,” especially given the media scrutiny in Toronto. But “easy way out” has long been lobbed by local columnists about players who choose to leave in free agency, and Fischler’s just the latest there. At least he didn’t run a dubious story about Tavares and hot dogs though…

3. All the people who claimed DeMarcus Cousins signing with the Warriors “ruined the NBA”: It’s amazing how many people decided to take the “ruined the NBA” stance. Here are a few examples:

Presuming he won’t be completely destroyed by his Achilles tear—given it’s a tricky injury that has fucked up a lot of careers, and the only tiny bit of risk built into this deal—his presence on the team basically makes them a perfect basketball unit, the NBA’s 1927 Yankees, an unstoppable force that might as well make the rest of the league go try water polo for a year.

This shit sucks. The very structure of basketball, where single players are worth dozens of wins and probability is something of a tertiary concern when analyzing larger sample sizes, lends itself to dynastic streaks. The Celtics won 11 titles in 13 years, the Lakers and Bulls won titles in sets of three, the Spurs sat around and calmly sniped five titles just by remaining consistent while everyone else came and went.

Usually, this is OK: Other teams are still fun to follow, and the pure gauntlet nature of the playoffs—16 wins in 28 tries or get the fuck out—give the winner of the title and that team’s best player a real gravitas pretty much every year. The NBA isn’t MLB or even the NFL, where teams of Eli Mannings slip into titles on the regular. You have to plan and execute and bleed to win; work at the top of your insanely prodigious talent. There is no other alternative. Luck is not here to help. It’s cool. But in the last decade or so, the changing behavior of OG players has made the already-profound heights a team has to scale to make it to the promised land shoot into fucking space.

At least Smith recognizes that this is a historical trend that predates Cousins, but “a perfect basketball unit” that “might as well make the rest of the league go try water polo for a year” is quite a take, especially considering how close teams like the Rockets came against Golden State this season. But he’s far from alone. Let’s go to DJ Siddiqi of 247 Sports, with “Warriors have destroyed the NBA with DeMarcus Cousins signing“:

The bottom line is, the Warriors are going to win the Larry O’Brien trophy in 2019. It’ll take a miracle or injuries for a team like the Lakers, Houston Rockets, Boston Celtics or Philadelphia 76ers to dethrone Golden State in the 2018-19 season.

And the bottom line also is that the Warriors have ruined the NBA.

Spicy! How about across the pond, where Stuart Ballard of The Express wrote a piece headlined “DeMarcus Cousins: Warriors have RUINED what promised to be a fascinating NBA season”:

The frustration stems from the exact competitive draw of the NBA.

…The Warriors have one-upped the entire league with this stunning move and it’s almost impossible to look past the Warriors winning a third-straight NBA title.

Ballard’s piece is actually more reasonable on the whole than many, so we’ll give his points to the Express headline writer instead. But there are plenty of even less reasonable people out there, particularly on YouTube. And the whole “ruined the NBA” take is pretty ridiculous at this point, especially considering that no games have been played yet and that Cousins is coming off an Achilles tear.

Rating: 🔥🔥🔥🔥 for Smith, Siddiqi and The Express.

2. Tomm Looney reacts to Jameis Winston suspension by saying “You can’t fire every guy who during their free time gets drunk and acts like a jerk, or nobody would be working tomorrow”: Winston, the Tampa Bay Buccaneers’ quarterback, has been suspended for three games by the NFL after an investigation concluded he touched an Uber driver in “an inappropriate and sexual manner without her consent” back in March 2016. Many have seen that suspension as too light relative to things like Deflategate, and have criticized the league for it. But Fox Sports Radio’s Tomm Looney decided to go the other route, minimizing the allegations and essentially arguing that everyone has done this (his comments start around 2:12):

“We have a whole country of people who act obnoxious when they’re drunk. Take away a guy’s ability to make a living because he acted obnoxious when he was drunk, wasn’t arrested, acted obnoxious when he was drunk and may have been vulgar. You don’t take away people’s jobs because of that, you don’t. And here’s another thing; he performs a duty that’s very, very unique. He does a job that one in a million people can do, or one in 10 million people. …Plus, he wasn’t arrested. We got guys arrested all over this league, some guys for manslaughter, drinking and driving, killing people, he should get more than one chance to screw up.”

Not everybody inappropriately touches women when they’re drunk, Tomm. And this is much more than “acted obnoxious when he was drunk and may have been vulgar.”

1. David Hookstead asks if the Browns should “be concerned” that Baker Mayfield got engaged: Drawing on-the-field conclusions from news in players’ personal lives is one of the more ridiculous takes out there, and David Hookstead of The Daily Caller did so in amazing fashion this week, arguing that the Cleveland Browns should be “concerned” about Mayfield announcing his engagement:

Cleveland Browns quarterback @BakerMayfield got engaged over the weekend to his girlfriend @emily_wilk.

Should the @Browns be concerned with their rookie quarterback getting engaged before the season has even begun? https://t.co/EVb46fF03k

Here are some highlights from that piece:

Baker Mayfield got engaged to his girlfriend Emily Wilkinson over the weekend, and it might be a cause for concern.

…First off, congrats to Mayfield and his future wife. I’m always happy to see other people living their best life and being happy. Getting married is obviously a huge step in a person’s life.

Having said that, I’m not sure this was such a smart thing to do. Mayfield has known the blonde bombshell for about six months. That’s not exactly a long time. Second, he’s about to be the face of one of the most depressing franchises in all of pro sports. He hasn’t even thrown a pass yet, and he’s already focused on marrying a woman he’s known for a few months. Seems a bit quick.

If I was the Browns general manager or head coach, I wouldn’t be loving this at all. I want Mayfield focused on slinging touchdowns. Now, I’m not saying he shouldn’t get married. I’m simply stating that maybe he should slow down a little bit. Let’s focus on getting a year of football under our belt before we rush off to get married.