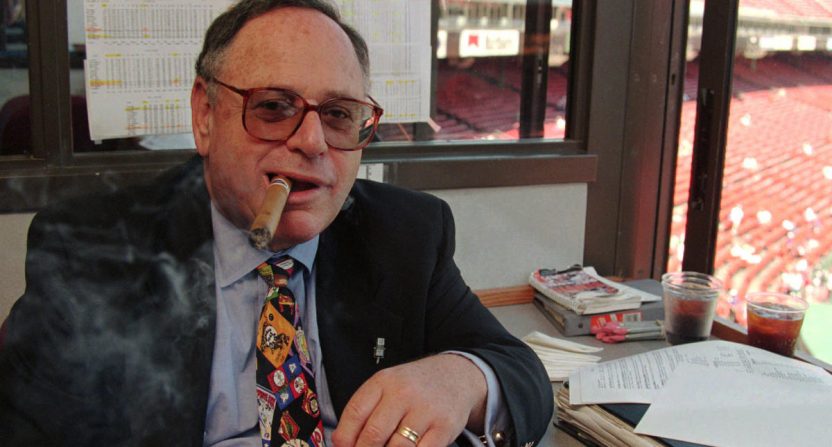 I love New York and I make it a point to go there a few times a year to catch up with friends and see the sights. There’s something new to do in the city every time you go, no matter how often you visit. Having said that, there’s also an arrogance on display by some, particularly within the media, who believe the world revolves around NYC and that the city and its residents are superior to the rest of the world.

That arrogance was prominently displayed by the New York Post on Monday as they reported the death of longtime radio play-by-play broadcaster Hank Greenwald. Greenwald, who died at the age of 83, was primarily the voice for the San Francisco Giants, but spent a couple seasons with the Yankees in 1987 and 1988. The tabloid focused on Greenwald’s two seasons with the Yankees, which is like writing a biography on Vin Scully and only focusing on his NFL work, but I’ll give the Post the benefit of the doubt that their primarily New York-based readership will know Greenwald more for his work with the Yankees.

However, it was how the Post framed their headline that wound up taking the classless nature of the entire situation to another level. On their site, in an article with an Associated Press byline, Greenwald’s name is nowhere in the headline, which read “Former Yankees radio voice dies at age 83” as if they want their readers to play a guessing game as to who just died.

That wasn’t even the worst part. What was worse was how the Post tweeted out the story.

There are plenty of ways to word this, but invoking John Sterling in a tweet to an article about the death of someone else clearly isn’t the way to go about it. Not only did the Post not use Greenwald’s name again, they somehow jumble a tweet and make it so confusing that if you weren’t careful, you could have skimmed that tweet and thought that Sterling, and not Greenwald, had died, and the Post screwed up by having the wrong picture in their tweet.

The replies to the Post’s tweet are almost universally negative, complaining about both their confusing wording and mention of Sterling, which had nothing to do with anything.

This headline gave me a heart attack. Could’ve just said his name and not mentioned sterling.

This is the worst headline/tweet I’ve seen in a while, I legit thought the voice of the Yankees passed away Jesus

The wording is bad, at first I thought it said John Sterling died.

Other replies called out the Post for clickbait and disrespecting Greenwald by using the name of someone more known to people today than the guy who just passed away.

Why don’t you just put his name: Hank Greenwald. He isn’t defined by who came after him at his job.

Hank Greenwald!!! Stop trying for clickbait, the man deserves more respect than that. Y’all are hacks!

Please fire whoever wrote this. Disrespectful and misleading. Absolutely Unprofessional.

Not cool way to headline this. Insensitive & well just awful.

Have to use Sterling as a way to earn a cheap click? Use the man’s name FFS! Disrespectful.

The article was from the Associated Press so the Post didn’t write the body, but each outlet does have control of their headline. For example, if you Google “Hank Greenwald Associated Press,” a large number of stories show up from multiple outlets around the country, most with the similar headline of “Longtime Giants announcer Hank Greenwald dies at 83.” That’s the way to frame a headline for a story like this, not whatever it is the New York Post was trying to do.