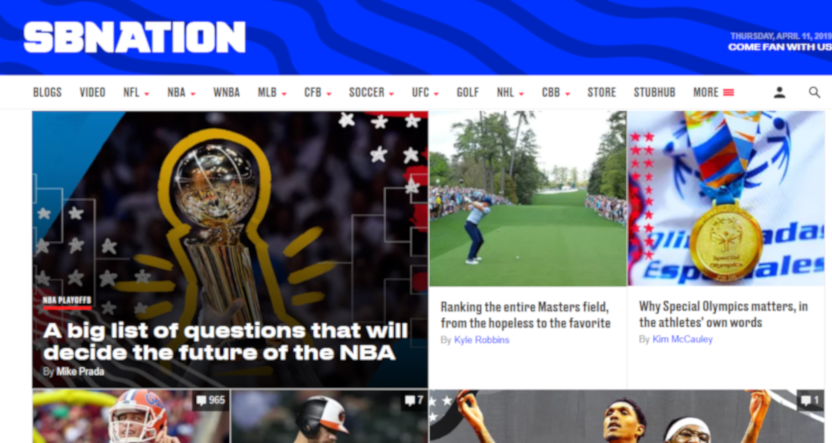 Back in September 2017, Cheryl Bradley (a former site manager at SB Nation’s Mile High Hockey) filed a lawsuit “both individually and on behalf of all persons similarly situated” against the company, claiming that SB Nation’s site managers pass the legal standard under the Fair Labor Standards Act to be considered employees rather than contractors. That lawsuit came weeks after a Deadspin piece on working conditions at the company. In September 2018, U.S. District Judge Rosemary Collyer allowed the lawsuit to move forward, and the lawyers for the plaintiffs (now including Bradley, John M. Wakefield and Maija Liisa Varda) have now reached out to other SB Nation site managers with information on the lawsuit and the option to participate in it.

Awful Announcing has obtained a “notice of collective action lawsuit” sent to “All current or former Site Managers and Managing Editors who performed work in the
United States for Vox Media, Inc. (“Vox Media”) in its SB Nation business division at any time since March 27, 2015,” sent from plaintiffs’ lawyers James E. Goodley of Jennings Sigmond, P.C. and Ginger L. Grimes of Goldstein, Borgen, Dardarian & Ho. That notice includes the following information on “What happens if you join this case?”:

If you choose to join this case, you may be required, with the help of Plaintiffs’ lawyers, to answer written questions, produce documents related to your work as Site Manager, attend a deposition, and/or testify in court. You will not be responsible for paying any lawyers’ fees. Plaintiffs’ lawyers are being paid on contingency, which means that if Plaintiffs do not receive a recovery in this case, no lawyer fees will be owed. If Plaintiffs obtain a recovery, either by settlement or judgment, Plaintiffs’ lawyers may, pursuant to the FLSA, file a request with the Court to receive part of the recovery as compensation for their services. Any settlement or fee award would require the Court’s approval as being fair and reasonable.

If Plaintiffs and the other Site Managers win this case, you may receive compensation for unpaid minimum wages and/or overtime wages. The maximum possible recovery allowed under the FLSA is double (2x) any unpaid minimum wages and overtime. If you elect to join this case, you designate the Plaintiffs as your agent to make decisions for you relating to the litigation, including settlement, lawyer fees and costs, and any other matters relating to this case, regardless of whether a recovery is ultimately achieved.

Thus, if you elect to join this case, Plaintiffs’ decisions will be binding on you and your claims. A recovery is not guaranteed and depends on the adjudication of the claims.

You do not need to join this case. It is your choice. If you do not join the case, you preserve the right to file your own separate claim, or not, as you choose.

The notice states that “Plaintiffs’ lawyers must receive your form by June 3, 2019 in order to preserve you right to join this case.” It also mentions that the FLSA “prohibits Vox Media from retaliating or discriminating against you in any way because you elect to join this case” (relevant for current site managers), and also mentions that the filing deadlines here are now three years after the violation or four if the violation is found to be willful (which explains the March 27, 2015 date listed above), extended from the general two or three year deadlines respectively.

As with all lawsuits, there’s no guarantee that this winds up in court. And many lawsuits on the contractor versus employee question have been settled outside of court, such as a Yelp one in 2012 and an AOL one in 2009 (which, as this complaint notes, involved some current Vox executives who were at AOL at the time). We’ll see if that happens with this one, or if it winds up going to trial.