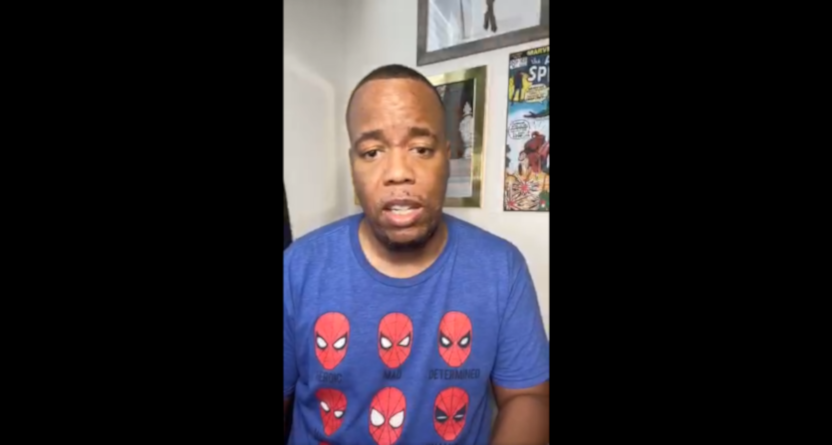 Robert Littal, the founder and editor-in-chief of Black Sports Online and the co-host of the TMZ Sports show on FS1 (update: as per Outkick’s Ryan Glasspiegel, Littal is now out there), is under fire from several former BSO contributors for propositioning them for sex, saying they’d have to show him their breasts if they made too many errors, making sexual jokes about them, and more. Sheena Quick, a former writer there who now works for Fox Sports 1340 in D.C., shared stories from her time at BSO on Twitter Saturday night:

I began writing for BSO in May 2016 at the suggestion of a former writer who was a friend of mine. During training, your posts have to be approved by Rob before they are posted. One night, Rob stated that if I had more than a certain number of errors, I had to show him my boobs.

In addition to this, BSO writers are not paid, despite writing hundreds of articles. Writers pay for their own hotel, travel, per diem, etc while being addressed in a condescending tone in group chats for everyone to see.

So, I’m going to share my story of how Robert Littal of @bso has been inappropriate with his female employees. I waited to share this because I didn’t have receipts, but a former writer I worked with has screenshots and was able to send them to me

This is my own experience. There are other women who have experienced worse. But it’s not my place to speak for them.

This one particular day, I was going to attend a Chris Brown concert in San Diego for the “Hell of a Night Tour” with my little sister. I checked in told the group I would be writing an article and be out for the rest of the day.

Receipt one: @bso called himself the “Overseer” and I immediately showed my discomfort with their comments pic.twitter.com/xdm6zXSxuo

After myself and @Quierra_Luck called him out on his inappropriate comments…there was no remorse just “either get over it or not” and “I’m not changing I who am for you” pic.twitter.com/K8xeDSRoWu

After that situation and other sexist comments (like laughing when I asked about the WNBA being a category in our WordPress) I fell back from writing as much as I did for the site. Now mind you, I had the some of the biggest ent stories for BSO

To find out that he is still LYING ON ME. Saying REVOLT reached out to him about hiring me, saying rumors were out there about me, lying saying he paid for hotels for events… pic.twitter.com/U2WIAGfhOT

I started the #survivingBSO hashtag so other women/men can come forward and talk about his toxic work environment. Has nothing to do with R Kelly and the fact that u @bso think you’ve done wrong is beyond me pic.twitter.com/Sch2CiBzk1

Gunn also shared a DM she received from another former writer:

Another anonymous DM from a Black woman who worked for @bso smh he only wanted “attractive” women writing for him no matter what their writing/reporting was like pic.twitter.com/8Ux7uJGPel

Another woman on Twitter shared propositional DMs she received from Littal:

“Do I need an NFL contract to smash”.

I was 23 and that shit was STILL wild to me. pic.twitter.com/Sct0VP2P5K

Several other BSO staffers past and present spoke up with their support for the women speaking out. And National Association of Black Journalists president Dorothy Tucker offered her support, and said the organization is crafting a statement.

I am personally sicken by what I am reading/seeing/hearing. @NABJ does not only support the women that are #SurvivingBSO, we will do whatever we can to advocate on their behalf. We are joining @NABJSports in crafting the appropriate response and statement. @ASherrodblakely https://t.co/TUA1GBQrC2

#NABJ is disappointed to learn of the reported harassment and mistreatment that women journalists have been experiencing as employees of @BSO and its CEO #RobertLittal. Full statement: https://t.co/RitdLUKG0q Thread: 1/5

“In a time where Black voices are needed now more than ever in the media, media owners … should be working to support and uplift their employees and not undermine their abilities because of their gender or refusal to participate in inappropriate behavior." @Dorothy4NABJ 3/5

I want Mr. Littal …to do a better job engaging w/ women in a work setting…. to realize what he did was wrong & caused a lot of sorrow to those involved. I hope my story can encourage other women … to speak out & end the cycle of toxic work environments.” @Tamantha_5 5/5

On Monday, TMZ Sports also confirmed to Glasspiegel that Littal is no longer with their FS1 show:

Outkick has learned that Littal will no longer appear on TMZ Sports, a program that is produced by TMZ and airs on FS1.

“Robert Littal is no longer part of the TMZ Sports TV Show,” a TMZ spokesperson confirmed to Outkick in a statement.

On Sunday, Littal offered an apology for his “inappropriate” comments in a Periscope video, but one that didn’t mention the names of the women involved or the specific things he did wrong:

“There are some things as you’ve saw that I’ve said to my female contributors in the past that are very inappropriate. They were inconsiderate and they were flat-out wrong. And for that, I apologize for that, 100 percent. I was totally wrong with that. I shouldn’t have let it happen, I shouldn’t have said that, I apologize to all of those women in public. I have the utmost respect for Black women; my mom’s Black, my wife’s Black. I should never put them in a position to be uncomfortable. So I apologize to them publicly.”

“I just wanted to address a couple of things that you have seen. The group chat, the groupme that you saw, from you know, four years ago, from four years ago, the group chat that you saw that I got upset in, I am personally responsible for that group chat. I let all of that stuff go in group chat. I was the one who allowed that group chat to get like that, to get toxic. And the day that that happened, I got upset, and I shouldn’t have lashed out. But what happened after that, I did apologize, and we made sure that that would never happen again. I did participate in it, and that never happened again after that.”

“…The overseer situation was, we all had nicknames in the chat, it was just one of the nicknames that I had. With that being said, I want people to truly understand that I never physically assaulted any woman in my life. I just want to draw the line between my inappropriate comments and sexual assault, which is a very serious thing. I never did that and I never will do that. I’ve never done that.”

“I will continue to do what I’ve always tried to do, which is always stand up for Black people, do the best for Black people, and try to help the people in the industry. So that’s pretty much it. I wanted everybody to hear that, that I do apologize to each and every one of the women that came out. I apologize to anyone that I made feel uncomfortable. And I’m definitely going to do better, and I’ve done better. And I apologize to my wife as well. Thank you.”

Many responded that that apology didn’t go far enough:

BSO had the opportunity to be something great and it’s scarred with not only being reduced to a gossip site, but now an unsafe place for women in sports.

You need to consider that these behaviors have led up to this moment. You need to right your wrongs….

I hope there will be another more thoughtful and sincere apology in which you name the women you harmed and outline your plans for stepping down and replacing yourself with someone dedicated to improving the work culture for everyone.

Honestly you should’ve just kept this LIVE. You couldn’t even say their names

This a weak apology. If someone else had done the same you would be all on them and rightfully so. You ain’t sorry just sorry you got caught and exposed.

And some noted that Littal didn’t address particular complaints, including byline removal. On that front, Quick offered proof:

All of my articles now read “by BSO Staff”. pic.twitter.com/R44RGQOY9x