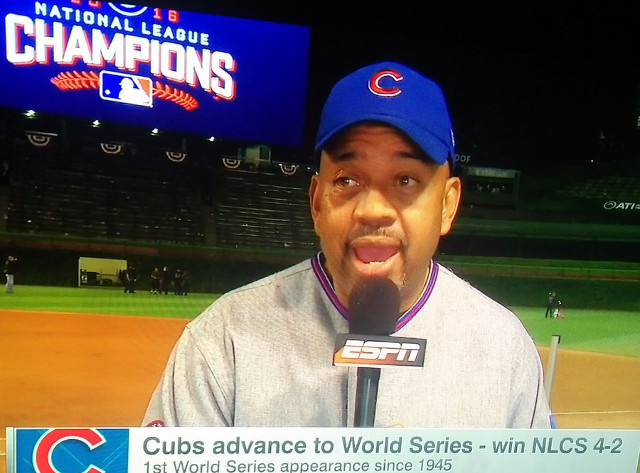 This week, Sports Illustrated published an essay from veteran reporter Tim Layden in which he investigated what he sees as a trend away from objectivity in sports media. Layden interviewed several journalism educators and recounted the story of Michael Wilbon discussing the Cubs live on TV wearing an Ernie Banks jersey, arguing that the old days of sportswriters and commentators who didn’t root for wins or loses has been gradually replaced by an age of outright fandom.

The change has come as writers have used their attachment to a college team or professional franchise as a tool to better connect with an audience. ESPN personalities Scott Van Pelt and Mike Greenberg have made narrative devices of their affection for Maryland basketball and the New York Jets, respectively, with scant blowback. There’s little doubt that hometown writers in small markets have been doing this for decades (at least), but credit for taking the practice into the mainstream probably goes to Bill Simmons, who at ESPN developed his audience in part by openly professing his passion for Boston teams. It’s become commonplace since, both in traditional neutral publications and through the proliferation of team-employed “journalism.” A few years ago Moran took some students to the NFL combine and was shocked to see credentialed media wearing team apparel. The approach can be a full-throated declaration of fandom or more subtle references: the word “we” subtly creeping into copy or the occasional photo with a celebrity athlete, snapshots that could be seen as establishing a journalist’s access and power, but could also look like the work of starry-eyed fans.

Even the briefest glance across the sports media landscape offers ample support for Layden’s thesis. Thousands of readers flock to websites that don’t apologize for homerism. Numerous big-name TV personalities wear their rooting allegiances on their sleeves. Twitter allows national reporters to cheer for their teams in public. Nowadays, when you scan the average press box, you’ll see not only avowedly objective beat writers but also bloggers who embrace the fact they want their team to win.

But Layden seems to miss a couple key points. For one thing, proud subjectivity in sports media may have spread, but it’s far from a new phenomenon. As SB Nation’s Spencer Hall points out, the rest of the world is far less attached to the ideal of objectivity when it comes to something as trivial as sports. And as The Ringer’s Bryan Curtis notes, some of America’s most accomplished sportswriters have been eschewing objectivity for decades.

But beyond that, Layden (who said he wishes he’d had time to delve deeper into his subject’s subtleties) fails to differentiate between traditional outlets like newspapers and newer media like blogs, or between old-school highlight shows and new-age discussion shows. A newly diffuse media landscape almost certainly allows room for both the newspaper writer whose only rooting interest is a quick game and an easy story and the blogger whose rooting interest mirrors the average fan.

Sportswriters serve readers, and in 2017 readers have a wide range of interests. Some want the traditional, dispassionate coverage from a clear-headed semi-neutral observer. Others want a game story full of emotion and all-caps complaining about the bone-headed coach. Both forms can coexist. In fact, fans are better off if they do.

Sure, openly partisan reporting can lead to misinformed readers, which poses a massive problem in, say, political journalism. But sports are inherently low stakes. The worst outcome of a biased sports blogger or analyst is what? Readers thinking the wrong guy should win MVP? Fans overvaluing their team’s young prospects in barroom debates? Our democracy will survive.

Obviously a sports media that’s entirely full of unabashed homers would create some huge problems. We would all be worse off if local reporters buried player misconduct to help the home team or if national reporters let their rooting allegiances affect coverage of stories about domestic violence or racism or sexual harassment or any number of other weighty subjects. But no one is much worse off if a blog pushes a fan’s perspective, a profile addresses the author’s personal connection to his subject or a TV anchor wears his alma mater’s gear on air.