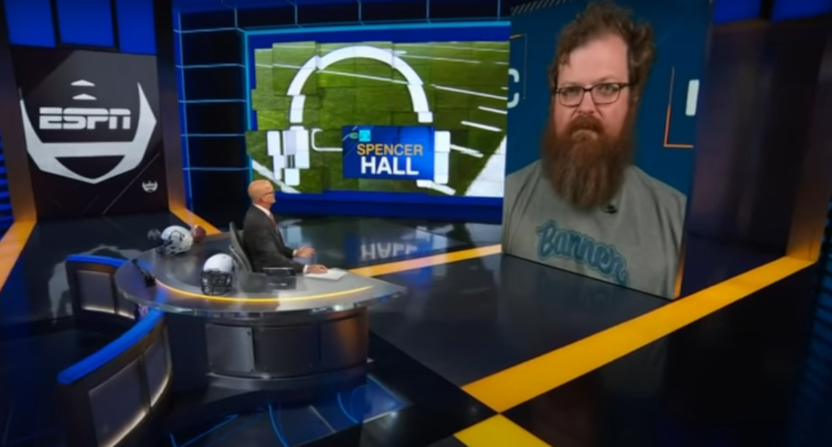 One of the longest-tenured and most prominent writers at Vox Media’s SB Nation and Banner Society is moving on. Spencer Hall, the founder of Every Day Should Be Saturday, had been with Vox since 2009, and had spent time as the editorial director of SB Nation and most recently as a key figure (with the editor-at-large title) in college football site Banner Society, which Vox launched last fall. But Hall was one of the many SB Nation and Banner Society employees furloughed for three months (May 1-July 31) by Vox, and on Tuesday, he tweeted that he’s taken a buyout and won’t be returning there:

I'm out. Here are as many thank yous as I could remember. pic.twitter.com/52i6dCvC5w

Hall’s departure seems like a significant loss for Vox on several fronts. For one thing, he’s long been one of their most well-known and most-liked writers, as the reaction to the shutdown of Every Day Should Be Saturday last summer illustrates. The various introductory essays he’s written to different college football seasons in particular stand out for the amount of online discussion they’ve generated. And even beyond his significant online presence (142,000 Twitter followers as of Tuesday) generated from a remarkably long period of online prominence (dating back even beyond that 2009 partnership with Vox to an independent EDSBS and to his work for AOL FanHouse), Hall has regularly appeared on ESPN’s SportsCenter With Scott Van Pelt and on other notable media platforms. Having one of your writers show up in spots like that is a worthwhile boost for a media company, and losing a prominent figure like Hall will certainly reduce the amount of attention the world pays to SB Nation and Banner Society.

But while Hall exiting for good is definitely a new and notable loss, it’s worth keeping in mind that a lot of the damage to the SB Nation and Banner Society brand was already done with those heavily sports-focused furloughs, with Vox CEO Jim Bankoff calling sports an area “where short-term demand will be lower.” The furloughs meant that many of SB Nation and Banner Society’s most prominent staffers weren’t writing for them for at least three months, which led to the end of popular podcasts The Shutdown Fullcast (hosted by Hall, Holly Anderson, Jason Kirk and Ryan Nanni) and Podcast Ain’t Played Nobody (hosted by Steven Godfrey).

And that’s also notable, as the Fullcast in particular was doing successful live events before the COVID-19 pandemic outbreak, and live events have become a key revenue stream for many media companies. Of course, the future of live event content is currently up in the air thanks to COVID-19 restrictions. But if the world does return to a place where something like that’s again possible, it’s going to be harder for Vox and SB Nation to do that without already-established people like Hall and already-known brands like the Fullcast.

The furloughs have also led to Hall and several other furloughed colleagues (Kirk, Richard Johnson, Alex Kirshner, and Tyson Whiting) already launching a well-supported ebook, Sinful Seven: Sci-Fi Western Legends of the NCAA. And they’ve led to other people choosing to take permanent buyouts, including Matt Brown and Natalie Weiner. So the SB Nation and Banner Society brands were already hard-hit even before Hall announcing his permanent exit, and that’s thanks to Bankoff deciding to keep employing regularly–ratioed pundits like Matthew Yglesias instead of their prominent, competent and well-liked sportswriters.

Hall announcing he’s gone for good is a notable further blow to what remains of SB Nation and Banner Society, but those brands were already facing challenges thanks to Bankoff’s short-sighted decision to emphasize furloughs there. But Hall’s exit is further proof those brands aren’t going back to normal in August. And it’s a further suggestion that a lot less of the college football world will be focused on what’s being produced at Banner Society and SB Nation whenever college football does resume. Yes, there are still talented writers there, and there will likely still be good content there, but losing figures like Hall doesn’t help with the attention paid to your site. Instead, a lot of that interest may migrate to where Hall winds up next. We’ll see where that is.