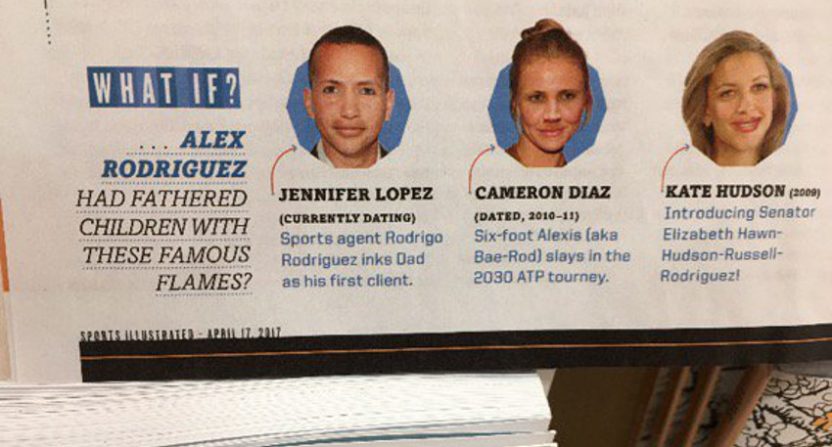 MLB on Fox analyst Alex Rodriguez has two children (with former wife Cynthia Scurtis, who he was married to from 2002-2008) and has been romantically linked to several prominent actresses since his divorce. Sports Illustrated decided to put those two things together in their most recent print edition, coming up with a weird face-merge thing for what A-Rod’s children with those actresses might look like as well as fake bios for them:

How long until this is a Snapchat filter pic.twitter.com/6qT07G8Mi0

this feels ill-advised and bad: Sports Illustrated illustrates what A-Rod's children might have looked like with other women. https://t.co/pwCSJHSuDX

It’s worth wondering if this is appropriate for SI. While Rodriguez’s personal life has often been a subject for the tabloids and for entertainment shows and magazines, and while who he’s dating does occasionally come up in sports coverage, this is an unusual and odd way to bring it up. It feels particularly strange thanks to the goofiness of the results from this face-matching; those look like badly-photoshopped images you’d find on a Blogspot domain somewhere, not like something that you’d see in SI.

It also feels like there’s a big jump from talking about who A-Rod has dated to what his kids with them would look like and what they would accomplish. That’s especially true considering that Rodriguez already has two kids. (They weren’t worth mentioning here because their mother wasn’t a famous actress?) Making jokes about an athlete or commentator is one thing; bringing their kids, real or hypothetical, into it feels like something else.

Of course, SI can do what they want, and they’ve been known for plenty of pop-culture riffs in the past, especially online. But that makes this perhaps stranger; who exactly is this sort of face-mashup supposed to appeal to? The older-skewing print demographic? That seems unlikely, which is why it’s odd that it wound up here. But this isn’t something that would necessarily play well if they’d just ran it online either. It feels like a goofy idea that they just decided to run with for some reason, and one that probably should have been shot down sooner. It’s not necessarily a big deal, and it certainly doesn’t reflect on all of SI’s journalism or coverage, but that reputation for journalism and serious sports coverage makes this stranger. This feels like a misstep for them.