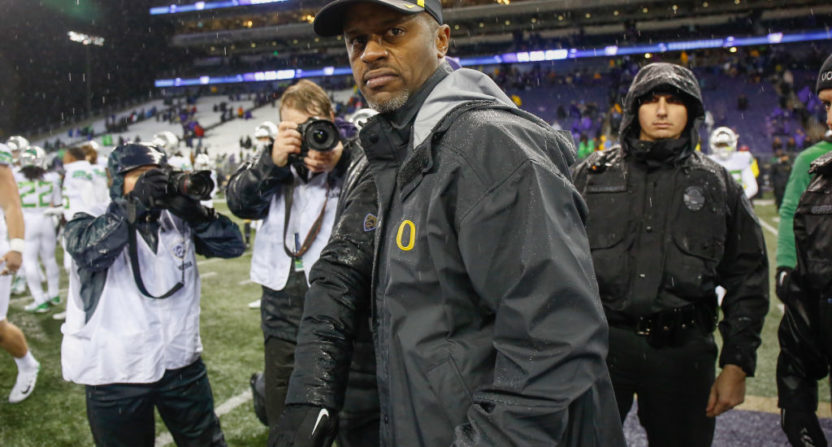 As pointed out by Football Scoop’s Scott Roussel, the initial piece included information on Oregon coach Willie Taggart (Seen above) “hoping to land a job in the Southeast” less than a year after being hired by the Ducks, and said he had received and declined an offer from Ole Miss. The updated piece mentioned only that Ole Miss has interest in Taggart (alongside Memphis’ Mike Norvell and USF’s Charlie Strong), and that “There is a strong level of interest in Taggart at multiple SEC schools.” SB Nation college football editor Jason Kirk included an editor’s note in the updated piece:

“[Editor’s note: A preemptively published version of this story described Taggart as having received and turned down an Ole Miss offer. It’s been corrected. My fault. — Jason Kirk]”

Good morning, Ducks fans: “Taggart does hope to land a job in the Southeast” via @SBNation https://t.co/Uo1BjC5ZaL

Not the case. That wasn’t correct information for publish and was edited. Production error https://t.co/eCI1qkIYma

Hi! HERE is the actual update on CFB coaching info. The ghost is out of the machine. Minor news desk error. https://t.co/erbbJbVafv

Hello I'm the moron who pressed publish too early https://t.co/7jJ1DnafCu

Absolutely no confirmation on offers. That was removed by me. https://t.co/B36U1ThLxA

Rumors are gathered by our news desk through the week. I confirm, deny, remove the info accordingly. An old draft was published. https://t.co/B36U1ThLxA

SB Nation deserves credit for the level of transparency here, including the explanations of what specifically went wrong. And it makes sense that they track rumors internally, then get them confirmed or denied before actually publishing. But this does illustrate the need to be careful with a process like that.

Putting information out there that Taggart wants to leave Oregon less than a year after being hired could be damaging for him if it isn’t actually true, and suggesting that he’s already turned down Ole Miss could be problematic if he winds up there. And the first version of the piece apparently also contained different information on Nebraska and Chip Kelly. Inadvertent publication of stories not ready for print happens at all sorts of outlets, and SB Nation’s far from the first here, but this story shows some of the perils that can arise when that happens.