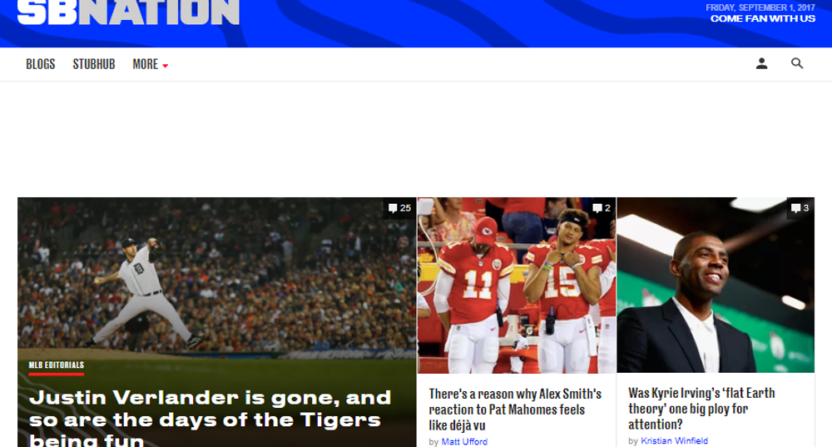 Deadspin’s August piece on the low or no pay (despite executives’ comments) SB Nation offers many writers and editors for its team sites has now led to a class-action lawsuit. Deadspin’s Laura Wagner, who wrote the initial “How SB Nation Profits Off An Army Of Exploited Workers” piece, now has the details on a lawsuit filed Friday in U.S. District Court in Washington, D.C. by Cheryl Bradley, a site manager at SB Nation Colorado Avalanche blog Mile High Hockey between 2013 and 2015.

Bradley’s lawsuit says she regularly worked 30 to 40 hours per week for SB Nation and was paid $125 a month. Her lawsuit is filed both “individually and on behalf of all persons similarly situated,” which is then later specified to be “all current and former site managers, managing editors or similar employees who performed work for Vox Media in the last three years” (although that class can be redefined).

Its chief contention is that site managers pass the legal standard to be considered as employees rather than contractors, and thus deserve to be paid at least the hourly minimum wage under U.S. labor laws. If that finds success, it could lead to massive changes for SB Nation. Here’s the lawsuit:

Bradley v Vox Complaint and Exhibits.redacted by Deadspin on Scribd

As that lawsuit details, the key question here is the standard of what makes an employee. It cites two cases in particular, Morrison v. Int’l Programs Consortium Inc. (from 2001) and Donovan v. Dial America Marketing, Inc. (from 1985), and mentions factors such as hiring and firing power, degree of control over work performed, supervision and control over employee schedules, and if the service is an integral part of the company’s business.

Bradley’s lawsuit makes a notable argument on the firing power and degree of control fronts in particular, mentioning how SB Nation NHL league manager Travis Hughes deleted a controversial post on her site and fired the writer without talking to her in February 2015, then fired Bradley “under false pretexts” less than a week later.

We’ll see how Vox Media responds to this. For one thing, they’ll undoubtedly point out that their site editor agreements (at least the one we obtained from 2014) spell out that “Blogger’s relationship with Vox Media is that of an independent contractor, and nothing in this agreement is intended to, or should be construed to, create a partnership agency, joint venture, or employment relationship. Blogger will not be entitled to any of the benefits that Vox Media may make available to its employees.”

Of course, just putting that in an agreement doesn’t mean workers are not employees, and that’s where those aforementioned tests come in.

Some of those tests could be interesting, as arguments can be made both ways as to if the site manager relationship meets the employee criteria. Vox undoubtedly has that hiring and firing power, as aforementioned, but degree of control over work performed could be a debate; those agreements do spell out a lot of specific requirements for site managers, including posts-per-week, posts on each game within a certain timeframe and so on, but they also state that “blogger shall exercise editorial control over the work product” (within corporate guidelines).

Similarly, Wagner’s initial piece had some notable information on how league managers interact with site managers, which could be argued as supervision or not. One site manager told her “They tell me every day to do more posts, more on social, more video,” but the she later wrote “Perhaps because site managers aren’t technically employees, edicts about posts and traffic, according to the managers I spoke to, are always couched as suggestions.” So the arguments on that front will be worth keeping an eye on.

Another big question is the “no opportunity for profit or loss” claim in Bradley’s lawsuit. The lawsuit notes that Bradley received the same monthly compensation regardless of the quality and quantity of articles she created, and states that “Vox did not allow Plaintiff to advertise her brand or her content,” “Plaintiff did not share in Vox’s advertising revenue,” and says she was required to turn advertising inquiries over to her league manager. However, AA’s Sean Keeley wrote last month about his 2008-2016 stint as a SB Nation site editor, and mentioned that he did see some opportunities for profit:

So even though my monthly check from SBNation barely paid my electric bill, I started generating other income on the back of my blog. I edited a Syracuse basketball preview magazine back when that was still a thing. I wrote a book all about Syracuse sports. I made editorial advertising deals with local sponsors, something that SB Nation encouraged and let me keep entirely for myself. Writing the blog also gave me opportunities to write for other outlets and raise my profile.

None of that necessarily disproves this lawsuit or means that SB Nation site managers won’t eventually be ruled to be employees. It sounds like that’s going to be a complicated question, and with arguments on both sides. We’ll see how Vox Media approaches this. In any case, the lawsuit’s certainly newsworthy, and it elevates criticism of SB Nation from internet talk into a legal matter. And if it does find some success on behalf of a large class, it could dramatically change how things work at SB Nation. We’ll see where this goes.