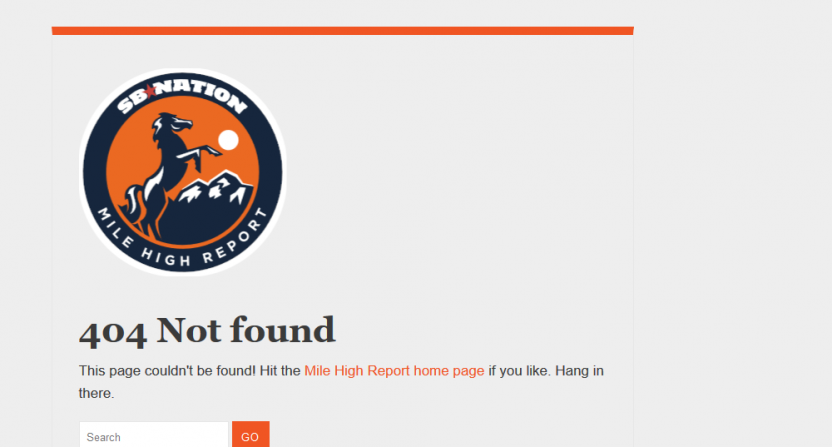 It’s been quite the year for plagiarism so far. January and February both saw writers let go over incidents of plagiarism at FanSided’s network of sites, and now one of SB Nation’s sites has parted ways with a writer who committed plagiarism. The writer in question is Yvonne Hew, who had been writing a weekly morning news and links piece for Denver Broncos’ site Mile High Report.

Hew put up a piece Tuesday morning (it’s been deleted, but the cached version can be found here) titled “Horse Tracks: Which Draft prospects should the Denver Broncos avoid?” The majority of her piece appears to have been taken from a piece by Erick Trickel titled “Finding Broncos: 5 NFL Draft Prospects Denver Must Avoid In The First Round.” Trickel’s piece was posted Monday at Scout’s Broncos’ site, Mile High Huddle, and Hew only slightly rephrased most of the piece, without providing a link or credit. Consider the intro to Trickel’s piece:

Every year, a handful of NFL Draft prospects get so hyped up that they end up hearing their name called a lot earlier than they should. Whether teams fall prey to the hype, or just flat out miss on their evaluations, you can go back every year and find at least one first round selection that shouldn’t have been made.

We’re still a couple months out from the Draft, but there are already prospects getting hyped up into the first round that shouldn’t be. These are players that teams are likely to reach on, and the Denver Broncos shouldn’t be one of them. This doesn’t mean these players are not good, it is just that they don’t belong in the first round.

And the intro to Hew’s:

It happens every year. A small group of NFL Draft prospects get hyped up in the media and suddenly everyone is talking about how Butch Maddison, DeeDee Yeller-Louder and Burrito Thompson are their team’s dream first round pick.

Teams end up falling prey to the hype or plain miss on their evaluations, and you can bet if you look back on the year, there will be at least one first round selection that is just cringe-worthy.

We’ve got a couple more months to wait until the Draft, but already there are some hyped-up prospects tipped for first round glory that perhaps shouldn’t be. These players are good and many teams will reach for them, but that doesn’t automatically make them first-rounders. The Denver Broncos need not hurry to get them. Let’s take a look (and these are not in any particular order).

The ensuing discussion of individual prospects shows off even more blatant copying. Both pieces cover the same five prospects (Cam Robinson, Malik McDowell, Christian McCaffrey, Garrett Bolles and Zack Cunningham) in only a slightly different order, and Hew’s piece is almost word-for-word what Trickel wrote with a few cosmetic changes. Consider the sections on Robinson, first from Trickel:

At 6-foot-6 and 320 pounds, Robinson has the size of an NFL offensive tackle. He is also young, set to turn only 22 years old during this next season. Add in the experience he has playing in the SEC and you can understand why he is going to get over-hyped. It’s something that has already happened, though the hype seems to be calming down of late.

For the longest time, I stood alone on the “Robinson isn’t a first round player” front. His technique is a mess. While his size may say NFL offensive tackle, what his play actually shows is NFL offensive guard.

He reminds me so much of Ereck Flowers out of Miami just a couple years ago. Flowers was one of those players taken in the first round who shouldn’t have been. Like Flowers, Robinson projects best as a guard at the NFL level, though Flowers is playing left tackle, but doing it poorly I might add.

…You often see him winning with superior strength, with help from a teammate, or with the defender losing the match-up more than Robinson winning it. Add in the fact he lunges on almost every snap, and you have a player that NFL defensive linemen are going to eat up.

…It is likely a team gets desperate, drafts Robinson early and sticks him at left tackle, like the New York Giants did with Flowers. Fans should hope that the Broncos don’t do that. There are better options at 20 for the offensive line than Robinson.

And then from Hew:

This 21-year-old is the perfect size for an NFL offensive tackle at 6’6″, 320 pounds. Add his experience playing in the SEC and you can see why for awhile, everyone thought the sun shone out of his…

Well, the hype has toned down recently. Some analysts have noticed his technique is in actual fact, a mess. That while his size may say offensive tackle, his play screams offensive guard. Scouts are concerned that while he sometimes shows beautiful technique, it’s rare to see.

He wins with superior strength, with the help of a teammate, or with the defender not matching up -€” instead of actually winning it. He lunges on every snap, and that’s something defensive linemen are going to use against him.

Some say he’s another Ereck Flowers, a player projecting as guard, yet playing at left tackle. And playing poorly. The Broncos could be getting their very own Flowers if they choose Robinson at 20.

It goes on like that for the other prospects, with Hew sometimes lightly rewording and slightly rearranging Trickel’s piece, but repeating his exact insights and analogies. Before the piece was pulled down, a commenter even pointed out that it was lifted from Scout: 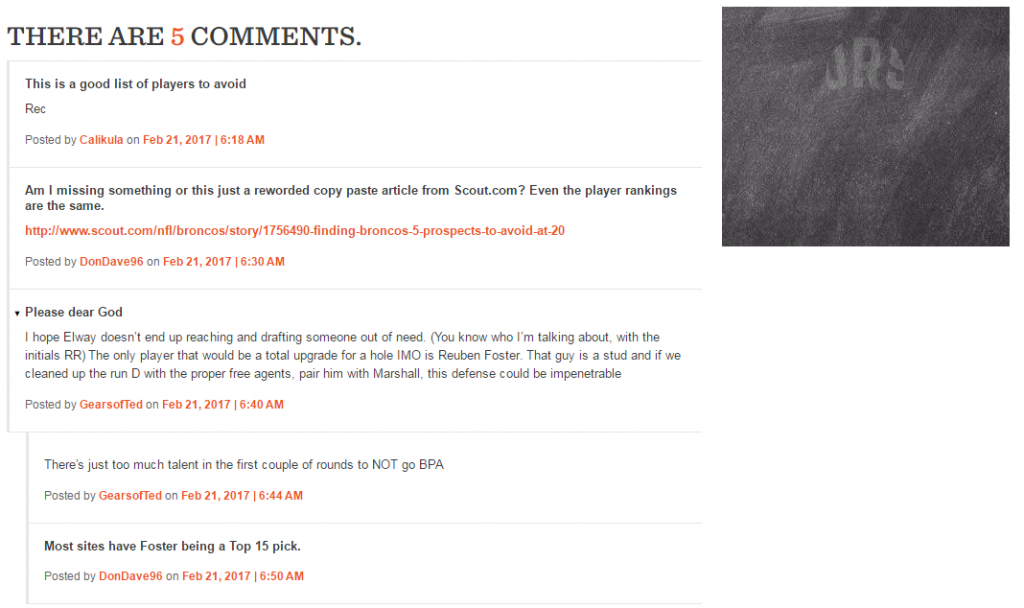 Hew did not return Awful Announcing’s request for comment.

Mile High Report editor Tim Lynch told Awful Announcing Tuesday night that he pulled the story down as soon as he was alerted to the plagiarism, spoke to the plagiarized Scout writer, and spoke to Hew, opting to part ways with her.

“I was alerted by a commenter and pulled the story down immediately as well as contacting the editor of the site that was plagiarized to let him know what had happened, to apologize and tell him we had taken the story down right away,” he said. “After talking with the unpaid staffer to hear her justification, reviewing the two articles and talking with our senior staff, I let her go.”

“We have always told our staff writers that they are to write original posts and any quotes or information from other sites must be attributed and linked,” he said. “This plagiarized material is not acceptable or tolerated at any level, and this is the first incident that it has occurred. ”

Lynch said he plans to address the incident on the site as well.

“We have an editor’s note being added to the same forum in which it occurred—the daily morning post, which is our highest-read post of the day.”

As with the FanSided cases, this is something that happened on a network site, not the high-profile home page, and both companies are massive networks with substantial amounts of writers. Plagiarism has happened at the best journalistic outlets (see Jayson Blair and the New York Times, plus many other cases), and it shouldn’t necessarily be seen as an overall indictment of the company in question (especially if they handle it swiftly and appropriately and make it clear plagiarism isn’t tolerated, as both FanSided and SB Nation have done).

However, the numbers of plagiarism incidents so far this year are certainly concerning, even given the scale of these networks. We’ll see if there are more to come, or if the company-wide condemnations of this kind of behavior help to limit further incidents.