After Wednesday’s announcement that Every Day Should Be Saturday would be closing down and that there would be a new SB Nation college football project coming, that project, “Banner Society,” was officially announced Thursday. So far, it looks like it’s going to employ mostly people who were already covering college football for SB Nation, but it’s going to be a separate site with a lot of emphasis on widely different platforms. Here’s some information from the SB Nation post about it:

Banner Society is an ongoing experiment with two goals. The first is to keep expanding, warping, and sharpening the conversation around college football in all its bizarre, corrupt, colorful elements.

The second is to find new and different ways to connect with our audience directly, all over the internet.

That piece goes on to mention their “daily-ish” Read Option newsletter, their existing podcasts (Shutdown Fullcast and Podcast Ain’t Played Nobody), and their Twitter (where they converted the old SB Nation CFB account and deleted its old tweets), Instagram, TikTok, and Twitch accounts, and it says there will also be “live events, and conference calls, and a merch store, and other places we haven’t even thought of yet,” plus “Our website, which will launch Aug. 21.” As per who’s involved, the site says it will be Alex Kirshner, Brian Floyd, Bud Elliott, Holly Anderson, Jason Kirk, Richard Johnson, Ryan Nanni, Spencer Hall, and Steven Godfrey. Many of those involved have been discussing the change on a variety of forums, with Hall taking questions about it on Twitch, several of the staffers engaging in a thread about it on Reddit, and several of the staffers talking about it on Twitter as well:

(“TN” there is Tomahawk Nation, SB Nation’s Florida State site, where Elliott used to be the main editor before moving to do more with SB Nation’s recruiting and general college football coverage.”)

We're launching a website about college football, but the "website" thing is really only a part of it. If you love talking about CFB, you're the society in @BannerSociety.

hi, me again, one thing you can do over here –> https://t.co/6Mr2rVKlZM is sign up for our newsletter, which will be home to writing from @edsbs and @38Godfrey @BudElliott3 and @RJ_Writes and whoever else until the for-real website is up and running. go do that. kisses. 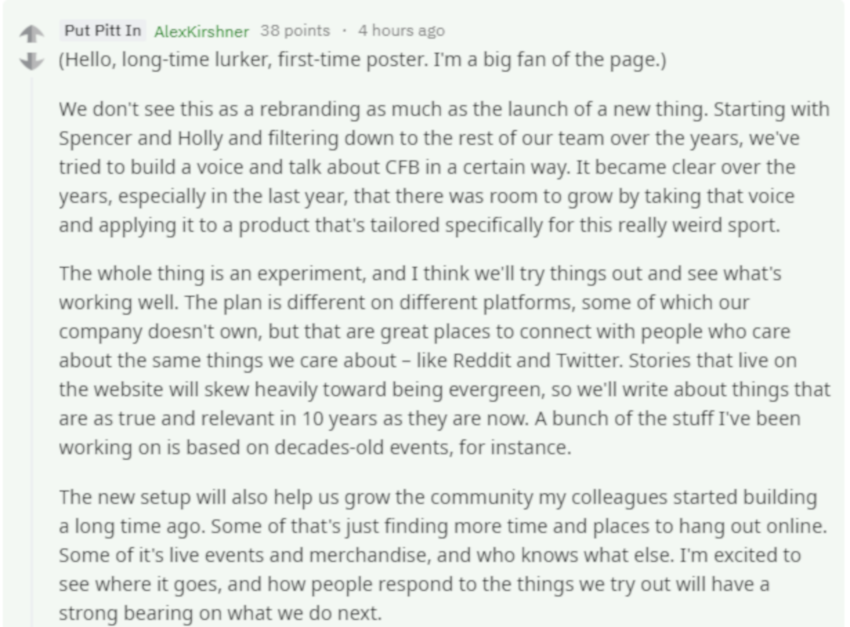 And here’s an internal SB Nation memo on this we received from a source: 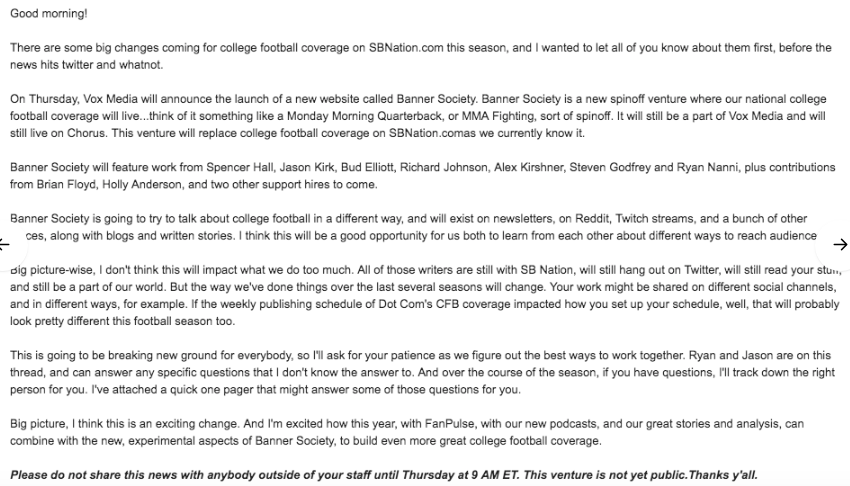 None of that is terribly specific on what Banner Society will actually look like, except that it probably won’t be a forum for discussing the various versions of The Hulk. There are lots of questions unanswered by what’s out there so far, especially when it comes to what in particular will be appearing on each of these different platforms. And all of the content here certainly won’t appeal to everyone; there are plenty of people who prefer to never engage with the likes of TikTok, Twitch or Reddit.

But many of the individual ideas here have found some success for media companies. Live events have already worked out well for the Fullcast crew, and they’ve worked at other outlets like The New York Times, while merchandise works for plenty of outlets, as do newsletters, and spinoff sites outside the main brand exist everywhere. And even some of the more unusual ideas here like Twitch are really just a different way to distribute a video stream; considering the vast numbers of shows featuring people talking about sports on platforms like Twitter or Instagram, this doesn’t seem like a huge stretch, especially considering that many of these people already have a significant following. In a world where there’s SportsCenter for Snapchat, a SB Nation college football project for Twitch doesn’t feel that unusual as a concept.

All in all, this seems like quite the experiment, taking some ideas that have been tried individually at SB Nation and elsewhere, but combining them and ramping them up. And it will be interesting to see what kind of an audience it gets, and how well it all works. But if SB Nation’s going to experiment with this, college football feels like a logical place to do that given the prominence of some of their writers, the audience they already have, and their long history (especially at Every Day Should Be Saturday) of doing unconventional content. And given the limited promises here on what this will actually be and the discussion of altering things as they go along, they have plenty of freedom and flexibility to stick with elements of this that do work and abandon any that don’t.

If this does work out well, maybe we’ll see SB Nation trying it in other sports. Or maybe this will remain just a college football approach. Or maybe the new Banner Society will wind up looking a lot like the old SB Nation college football coverage. At any rate, it will be interesting to watch and see what happens here.