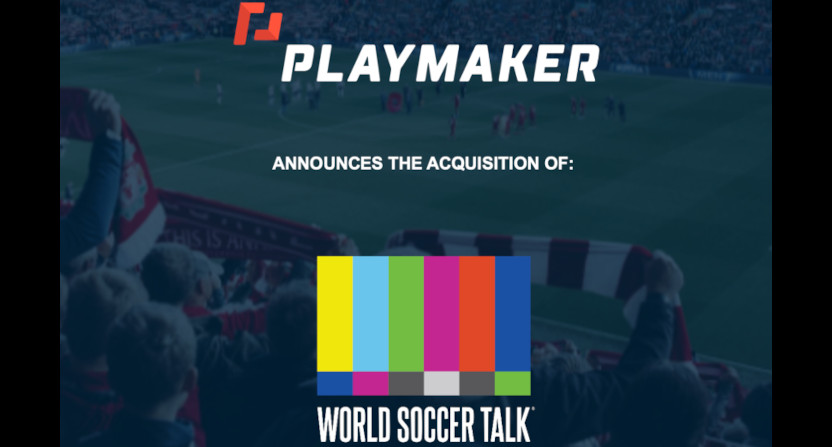 Tuesday saw an interesting acquisition in the digital sports media space, with Playmaker Capital purchasing World Soccer Talk. Toronto-based Playmaker bought Yardbarker last year, and they also own The Nation Network, Two Up, and FutbolSites. The latter is particularly relevant to this latest acquisition, as FutbolSites has a strong presence in South America and Mexico and with the Hispanic population in the U.S.; World Soccer Talk should help bolster that and expand their reach in North America. Here’s more from a release:

World Soccer Talk’s audience across web, social channels, and podcasts is primarily based in the U.S. and immediately contributes to Playmaker’s growing presence with North American soccer fans. Playmaker’s wholly owned subsidiary, Futbol Sites, has an expansive footprint across Brazil, Argentina, Chile, Colombia, Mexico, and the U.S. Hispanic market through widely popular soccer-first web properties, and it ranks as the largest regional digital sports media group in Latin America. World Soccer Talk will complement Playmaker’s presence in the Latin American sports market and with the U.S. Hispanic population, and establish Playmaker as a leading provider of digital soccer content in North America.

…“Soccer is on the rise in the U.S. and Canada, and Playmaker is focused on becoming the preeminent voice for the sport across the Americas, from the top of Canada to the bottom of Argentina,” said Jordan Gnat, Playmaker CEO. “World Soccer Talk Founder, Christopher Harris, exudes a true passion for sport that’s shared by the entire Playmaker team, and we’re excited to welcome him and World Soccer Talk into our family and our ecosystem as a core piece of a broader soccer strategy in advance of World Cups 2022, 2023 and 2026.”

As noted above, World Soccer Talk provides coverage on a lot of different fronts. But it’s their where-to-watch information and affiliate deals that Playmaker specifically cites in this release, saying that will be valuable for sports streaming services and sports betting operators:

World Soccer Talk’s domain authority for “where-to-watch” content makes it a popular and trusted source for soccer related information as well as an invaluable affiliate partner to sports streaming services. Affiliate advertising, the practice of delivering users to advertisers and sponsors and receiving a fee for users that convert to subscribers or one-time customers, is a vertical that Playmaker has sought to further activate across its myriad platforms. World Soccer Talk’s specialty in affiliate revenue generation will diversify Playmaker’s revenue streams and enhance user experience through exclusive and relevant promotions from the world’s leading brands and sports betting operators.

We’ll see what this ownership change winds up meaning for World Soccer Talk, and how they fit into the Playmaker group of brands.