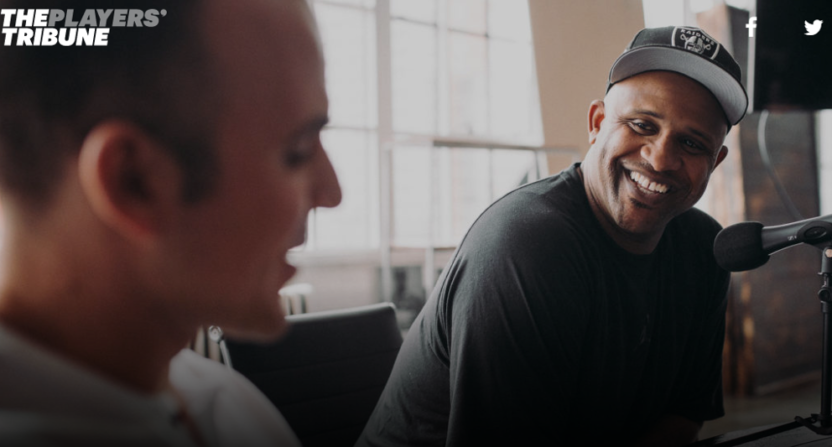 We’ve been writing about The Players’ Tribune’s focus on expanding beyond written content for a while, from their Budweiser-sponsored video studio to some video series to a movie on Vernon Turner to their podcast network. That network hasn’t been massive so far, with one episode of The Players’ Tribune Oral History Series (Michael Strahan narrating a show on the 1986 New York Giants) from January and eight episodes of The Rematch with Etan Thomas from May (weirdly, they said it would launch May 1, actually launched it May 8, released an episode a day for eight days and haven’t had one since), but it’s now getting a high-profile addition. That would be new podcast R2C2, featuring Yankees’ pitcher CC Sabathia and media personality Ryan Ruocco, which was launched Wednesday. Here’s more from their release:

“One of the best things about living in New York is that you’re at the epicenter of culture, and there’s no shortage of varying views and opinions,” says Sabathia. “R2C2 touches on everything from sports to pop culture to current affairs. Ryan and I have had a lot of fun with this podcast so far, and we’re excited to bring fans and listeners into the discussion.”

Adds Ruocco, ” In addition to being one of the best pitchers of his generation CC is so well versed on so many different topics and just an overall interesting and entertaining dude. CC and I have enjoyed a chemistry and banter since he came to NY in 2009. We’ve always joked about putting our clubhouse convos on tape. I’m so pumped for that to finally happen and to be able to share them with an audience. Based on what we’ve already recorded, I couldn’t be more excited.”

“CC has a unique lens to sport and culture, and R2C2 will bring fans inside the mind of one of MLB’s most successful and durable performers,” says Jaymee Messler, president of The Players’ Tribune. “R2C2 serves as another forum on TPT for compelling commentary and insight from some of the most recognizable figures in sports. We’re thrilled to welcome this new podcast to our growing network.”

Yes, in addition to their initials, R2C2 is a Star Wars reference (they’re both big fans), and the podcast is expected to cover plenty of sports and culture. The opening episode features Derek Jeter (who just happens to be the founder of The Players’ Tribune), and they discuss Game of Thrones, retirement and parenting advice with him, as well as baseball. Future announced guests include former Duke star and current ESPN analyst Jay Williams, current ESPN/ABC broadcaster Jeff Van Gundy, current Yankees’ star Aaron Judge and former Yankees’ star Andy Pettite. So there’s obviously a Yankees’ focus, but it’s interesting that they’re going beyond that with guests like Williams and Van Gundy.

And they’re not the only ones. For example, J.J. Redick did a podcast for Yahoo’s The Vertical while playing for the Clippers, and former Packers’ linebacker AJ Hawk started his podcast (up to 110 episodes now!) while he was still playing. And it’s not specifically a podcast, but Seahawks’ defensive back Richard Sherman did a video series for The Players’ Tribune this past season. Plenty of fans are looking for ways to engage with athletes, and podcasts can be a good venue for that. It may be a little tougher given the demands of baseball (perhaps why we haven’t seen too many active MLB players dive in here), but it’s probably easier for a starting pitcher like Sabathia who has regular off days to keep up with a podcast than it would be for an everyday player.

This could be a pretty decent podcast for The Players’ Tribune. For one thing, Sabathia has substantial name recognition from his 16 years in MLB so far (plus his 2007 Cy Young Award), and Ruocco’s decently well known on the media side (he’s worked for YES and ESPN, hosting a radio show on ESPN New York and calling NBA and WNBA games). For another, they’ve known each other for a while, so there should already be some chemistry between the hosts (perhaps the most important part of a podcast). And they clearly have access to some significant guests. It also helps that they look ready to talk more than just sports, and more than just the Yankees; that expands the potential audience. We’ll see how this goes, but it could be an interesting new podcasting foray, and part of The Players’ Tribune’s larger plans to keep growing.