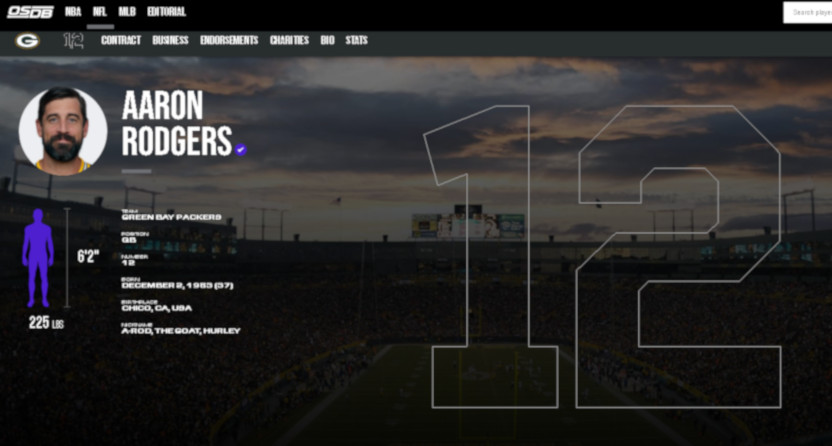 A notable new sports site, the Online Sports Database (OSDB), is now up and running. It’s founded by actor and producer Ryan Rottman and Green Bay Packers’ quarterback (and Jeopardy! guest host) Aaron Rodgers, and the idea is to provide information on athletes for fans, from statistics to personal interests to ways to contact their management. The site, which raised $2.5 million in funding ahead of its launch, debuted Tuesday with information on NFL, NBA and MLB players, and they have a lot more in the works.

As per a release, the funding “will help the platform with expanding its offerings in the coming months to include NHL, soccer, UFC, WNBA, PGA, LPGA, cricket and esports, while adding features such as college, high school and retired athlete profiles, historical data and sports betting insights, as well as subscription services.” Rottman spoke to AA by email ahead of OSDB’s launch, and said this idea grew out of the value he’s seen in the Internet Movie Database (IMDB) over the years as a way to not only find information on people in the entertainment world, but connect with their representation and figure out how to work with them:

“For the past 16 years as an actor and producer, I’ve utilized IMDb not only as a business card for myself but as a research tool to find other actors, producers and contact info to agents, managers and publicists. It occurred to me there was nothing like IMDB for the sports world. There isn’t one contained place you can find out everything there is to know about athletes and teams. There isn’t a place that highlights athletes away from their place of work. I had to navigate through 15 different sites to get in-depth info on my favorite players.”

Rottman said Rodgers immediately loved the idea when he first mentioned it.

“I brought the idea to Aaron, and he immediately stopped me and said, ‘Who did you talk to about this and how many people know?’ He thought it was a great idea and said, ‘Let’s make this.’ After the initial shock wore off, I got to work, and we started building it.”

Rottman said he and Rodgers first connected over golf, but that connection turned into a friendship, which turned into a partnership that’s now led to OSDB and more.

“Aaron and I met in Los Angeles about six years ago on a golf course. We immediately bonded over our love for golf and the feature film The Big Lebowski. Aaron has become an incredible friend and it was clear from the beginning he’s a really solid person with a huge heart. Our friendship turned into a partnership, not only on OSDB, but we’re set to produce our first feature film together about the injustices of college football. The project currently sits with Amazon Studios.”

As for building OSDB, Rottman said the key there was bringing in the right tech team and researchers.

“After I got the greenlight, I identified some really great advisors and we started to build out our staff. I knew early on we needed to hire a tech team that can convey mine and Aaron’s vision, so we hired Schiefer Chopshop (SCS) to handle all tech and design and they hit it out of the park. Then we hired a core team that’s had success in the sports world and launched other successful sports platforms and a team of researchers to build out player and team profiles.”

There are plenty of sites out there that have athlete stats, but OSDB looks to differentiate itself through information on other aspects of the athletes’ lives, from their personal interests to their investments. And beyond just putting that on profile pages, they’re planning to run editorial content on various athletes as well. Rottman said he and Rodgers felt there wasn’t always enough attention paid to athletes’ off-the-field interests.

“After talking to Aaron about the landscape of sports reporting, it was clear there was a void. Aaron felt there wasn’t enough reporting and highlighting athletes’ individual interests. There’s a ton of athletes out there that have achieved success in so many areas of life, but you never hear those stories. Not many people know Cole Beasley has a rap album called “The Autobiography” or that Thaddeus Young has invested in 85 companies. We’ve taken the approach that x’s and o’s are a big part of sports, but we want to celebrate the athlete for their entire body of work. Additionally, we feel the more you know about an athlete the more you will support them on and off the field.”

Another important piece of the puzzle is the management contact information, which Rottman said is crucial to have so that those looking to make business deals with athletes can find how to reach them.

“The management contact information aspect is so important to us at OSDB. It’s incredibly difficult for brands to identify how to get in contact with athletes so it’s costing the athletes personal appearances, TV cameos, endorsement deals etc. We’re really trying to bridge that gap.”

On the editorial content front, Rottman said the plan there is to work with individual athletes on profiles and feature new and exciting things they’re doing.

“The plan is to collaborate with the athletes and showcase them in a different light. Collaboration is key. We want to be an outlet for them to be themselves and show who they are without a helmet or a uniform on. If an athlete has a new charitable initiative their launching or a new partnership with a brand or even if they want to showcase their talents in the kitchen, we want to be that outlet for them.”

A key question with any new site is “How does it make money?” Rottman said they have monetization plans, including subscription tiers, but the goal for the moment is to get OSDB out there and get people using it.

“We do have a monetization strategy, but before we implement that we think it’s important to build goodwill with the athletes and users and really become a trusted destination for them. That’s our main focus upon launch. Once we become a daily destination, we will monetize through affiliate programs, ads, subscription model and eventually data licensing.”

And Rottman said they’re planning to quickly expand the site to several further sports, and to add further features.

“The plan has always been to host every professional sports league. According to our calculations, it’s about 35-plus sports in the marketplace. Upon launch both MLB and NBA were in full swing with the NFL getting ready for their draft. We chose to launch with those three sports and continue to build. The next three sports we plan to target are NHL, WNBA and the ever-so-popular esports. As for the addition of features, we’re going to listen to the users and get their feedback on what they’d like to see on the site moving forward. As I mentioned earlier, we’re all about collaboration.”