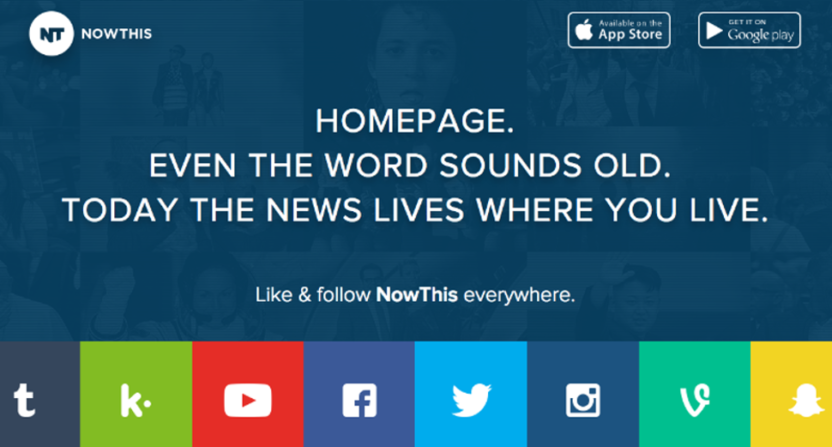 Back in early 2015, publisher NowThis (owned by Group Nine Media, a privately held company which also owns Thrillist, The Dodo, and Seeker and has backing from Discovery Communications) decided to close its website and put all its content on social media platforms like Twitter and Facebook, leaving only the notice seen above. Three years later, they’ve decided to relaunch the website in one of the more unusual pivots we’ve seen, and they did so in the wake of this week’s Facebook changes that deemphasize posts from publishers. The new NowThisNews.com went live on Wednesday. Business Insider’s Tanya Dua has more on the move, how it comes after many NowThis statements about the lack of need for a website, and how some other publishers are responding to the Facebook changes:

A pioneer of millennial-focused, short-form video content, NowThis has long argued against a destination website as being the primary medium of reaching news consumers.

The move comes on the heels of Facebook’s sweeping decision last week to fundamentally alter the News Feed and populate it with more user content versus brand and publisher content to enable “meaningful interactions.”

Facebook’s decision has caused many publishers to stop dead in their tracks and reconsider their reliance on social media platforms. BuzzFeed, for instance, started running ads on Friday to direct readers to its own mobile app, where it has a more direct relationship with them.

Update: However, NowThis says this move has been in the works for a while, and isn’t about the Facebook changes. From a statement they sent:

We have been strategically planning to relaunch the website for six months and that decision is unrelated to Facebook’s newsfeed change announced at the end of last week.  This relaunch isn’t a “pivot,” but rather is an additional channel to NowThis’ distributed model.

Even without this being in response to Facebook’s move, though,  the real relevance of this story for the sports world is about a publisher changing its focus back to a website as well as social channels. NowThis does occasional sports stories, but isn’t heavily invested on that front, and many other publishers’ moves aren’t going to be as dramatic as this considering that most never shuttered their websites completely (even FoxSports.com still exists post-video pivot, albeit with no one visiting it). Still, many publishers’ shifts towards video have been at least partly about the ability to distribute that video through social channels more easily than written content, even if it’s cost them a lot of website traffic.

That isn’t completely going away, as Facebook’s still important for publishers even after these changes (and other platforms like Twitter and Instagram still have a lot of appeal to publishers as well), but it’s now going to be harder for publishers to have their content show up directly in users’ news feeds without someone sharing it. And that may lead to less emphasis on Facebook, potentially less emphasis on distributed video overall, and more emphasis on a company’s own website. That’s a big change from several years ago; consider this February 2015 story from TheWrap on NowThis closing their website.

NowThisNews, a channel that produces breaking news videos, closed their online home at NowThisNews.com — and will live exclusively on social media platforms.

“Homepage. Even the word sounds old. Today the news lives where you live,” a message splashed across the sole remaining page of the shuttered website reads. The page acts as a portal to the company’s social accounts on Tumblr, Kik, YouTube, Facebook, Twitter, Instagram, Vine and Snapchat, as well as providing links into the Apple and Google app stores.

Ashish Patel, NTN’s vice president of Social Media, tweeted a screengrab of the homepage and added, “We just shut the desktop site down. @nowthisnews to be truly socially distributed media company. Follow us wherever.”

So, that didn’t work out, and maybe a homepage isn’t as old as you might think. But at the time, NowThis’ move got plenty of praise, including in posts like this LinkedIn one from Patrick Kitano (CEO of The Breaking News Network), who called it “the new way to build a media network,” saying “News discovery and consumption are moving to social media, and away from traditional websites.”

There are other advantages to consider with a website, too. For one, a website is indexed by Google and other search engines much more regularly than social media feeds are, so a publisher’s content is more likely to show up in search that way. For another, a website gives them a place where the content exists under their terms, which aren’t going to change suddenly (a downside of relying heavily on distributed video comes when the distribution channels change, as Facebook did here).

And it’s notable that this discussion isn’t necessarily video versus print; NowThisNews’ relaunched website is still just a video site (with vertical videos, too), with the difference being that their content’s now hosted on their own site as well as distributed through their social media channels. Videos are still important, for social distribution and sharing and perhaps especially for monetization (it’s more profitable in many cases to sell pre-roll ads on videos then to sell display ads next to written content, although that may not always be the case and the Facebook changes could have an effect there). But the NowThis move’s intriguing, especially as they were a “truly socially distributed media company.” Not so much any more. And while most others never went as far as NowThis did in pivoting to distributed video, there could still be a lot of focus pivoted back towards homepages. And while NowThis says this particular move wasn’t about Facebook’s changes, those changes might cause other organizations to look more at their websites in addition to just socially-distributed videos.