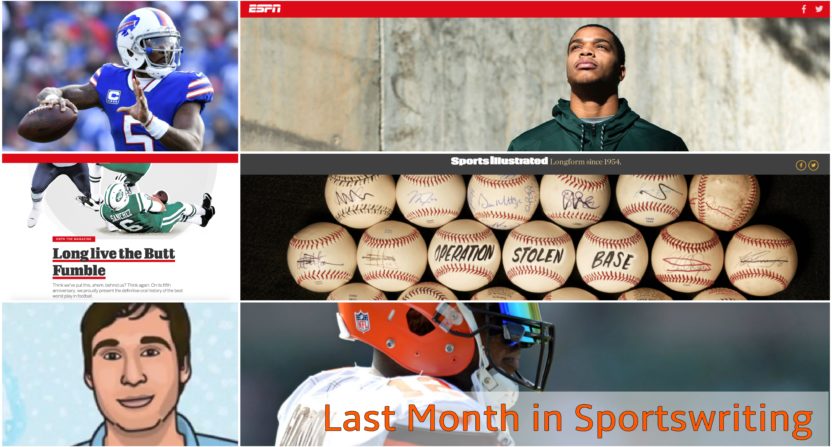 Without further ado, here’s the best in sportswriting from the month of November.

NBA season is back in full swing, which means Zach Lowe is back atop his throne as (arguably, at least) the best sportswriter in America.

Lowe does a little bit of everything for ESPN. He reports, he breaks down film, he analyzes stats, he hosts an entertaining podcast, he appears on TV. His weekly “10 things I like and don’t like” column is a must-read for NBA fans, as is his longer-form work. In November, Lowe profiled Nikola Jokic, helped break news of the Eric Bledsoe trade, assessed the Suns’ post-trade prospects and tackled the puzzling Utah Jazz. No one in sports media transitions more seamlessly, even within a single piece, between traditional reporting and Xs-and-Os analysis.

If you follow the NBA and don’t read Lowe, you’re doing it wrong.

Josh Gordon on Addiction, His NFL Comeback, and Using Before Games; by Clay Skipper, GQ

The big story to emerge from this Q&A was Gordon’s admission that he smoked or drank before every game of his NFL and college career, but the interview offered so much more. Gordon’s candor about his battle with addiction and his return to the NFL makes it a must-read.

It has been five years since the most embarrassing moment in Jets (and maybe NFL) history, and this piece takes you back through every moment of the gloriously awful play.

This is an engaging profile of the renegade quarterback who is likely days away from winning a Heisman Trophy.

This piece asks a compelling question: Why haven’t administrators complicit in Larry Nassar’s mass sexual assault of gymnasts been punished the way those at Penn State and Baylor were?

Patrick Ewing has the floor; by Ian O’Connor, ESPN

Get reacquainted with Patrick Ewing, who couldn’t find an NBA coaching job but happily wound up back at Georgetown, where he first rose to fame more than 30 years ago.

Published in early November, this piece attempted to explain why Tyrod Taylor prompts such fury from his detractors. It gained extra relevance as Taylor was controversially benched, then reinstated after his backup threw five picks.

The Process Is Over: Ben Simmons and the 76ers Have Arrived; by Lee Jenkins, Sports Illustrated

Want to get to know the NBA’s next superstar? This feature on Ben Simmons’ emergence as a potential successor to LeBron is a good place to start. Lee Jenkins also profiled Blake Griffin, a piece that’s worth checking out even in light of Griffin’s recent knee injury.

Much has been written about Barstool’s burst onto the sports-media schene, but none of it has captured the phenomenon as articulately as Jay Caspian Kang does here.

Josh Gordon Is Returning to the NFL and Ready to Stay Sober. Do You Believe in Him? by Ben Baskin, Sports Illustrated

Ben Baskin set out to write about Josh Gordon’s comeback, but when Gordon’s manager stonewalled him, the story became part of the story. The resulting piece is interesting as much for SI’s editorial decisions as for the portrait of Gordon.

One game to remember. Just one; by Ben Shpigel, New York Times

This piece spotlights the NFL’s versions of Moonlight Graham, but also humanizes players who face the difficult transition from the league back to the outside world.

A massive fake-autograph caper involving a former independent-league baseball player? That’s too good to pass up.

The spirit of Miles Bridges; by Carvell Wallace, ESPN

This is one of the best sports profiles you’ll read all year, a personal and intimate look at Michigan State forward Miles Bridges as he enters the sophomore year he was never supposed to have. It’s not easy to turn a parachute-into-town-to-write-about-college-sports-star story into a must-read, but Carvell Wallace pulled it off.