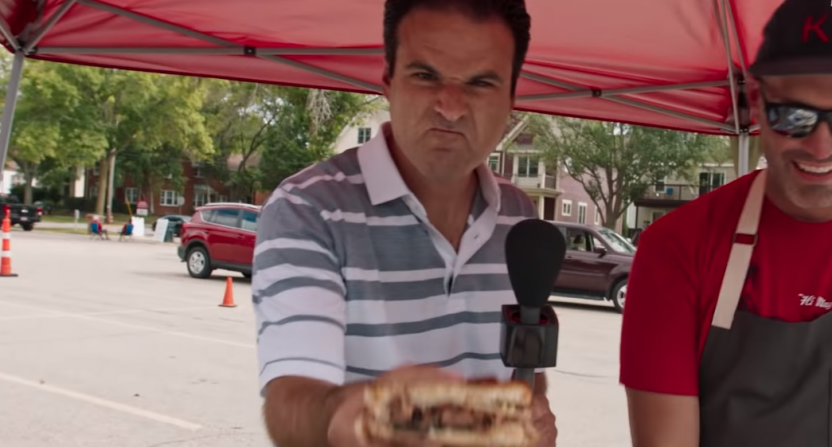 Darren Rovell had sushi last night. We know this because he tweeted out his bill, not to praise the meal (though he did, kind of) but to share his confusion at the optional health insurance surcharge on the check.

The food was good tonight, so I don’t mind paying for the health insurance for the guy who made my sushi. Wait, what. pic.twitter.com/0n9SjNaNP2

The full picture of the check clearly reveals the reasoning behind the charge:

To provide employees with healthcare benefits, an optional 2% surcharge is added. This contribution goes directly to healthcare for the Arami staff.

Rovell being mystified by this is funny on a few levels, as many, many people pointed out in his replies. Here’s a representative exchange:

youre right that would be a crazy thing for a person to say. most people still want to make sure their sushi chef has health insurance even if the food is bad

your problem is that it was on a separate line?

I have no problem with the health insurance. It’s the line item. Is there a line item for electricity?

Darren went back to that well a few times, so he must have been really proud of the point:

What’s next? The electricity bill?

Let’s give Darren the benefit of the doubt here and assume his original tweet was in fact merely expressing confusion over the line item, and not displeasure at the extra $1.68 to cover employee health insurance. (Though considering the rest of us probably would have just said “Hey, nice!” and moved on, that’s pretty generous.) Rovell’s insistence that this is unusual is odd, because it’s been a practice for a while now.

Here’s a CBS Chicago story from December of 2018, for example, where a different restaurant owner explains why it’s best to do it this way, which you’d think someone with a brain full of brand PR concerns would have realized from the start:

Frallman didn’t want his staff to go through that, so about a year ago he added a two percent surcharge to food bills.

About a dozen employees pitch in about $100 per month, and the employer pays the rest. Frallman says it’s to attract and retain talented workers in short supply.

He says larger restaurants may be doing the same. They’re just increasing the cost of food without the consumer knowing were the extra money’s going.

“If anything happens we want to make sure they’re taken care of,” Frallman said. “Why is it important to be transparent? Well, again I didn’t want to make it seem like it’s going into the owner’s pockets.”

It’s becoming more common throughout the industry, as well, an there’s a certain irony here in Rovell being burned by a lack of industry trend knowledge. Lo, the betrayal! But the most revealing thing is that Darren reacted incredulously (again not necessarily at paying it, but the dumb electric bill thing demonstrates he clearly thinks it’s a stupid idea) despite the obvious merits of the method.

It’s better for everyone this way; employees, obviously, get easier access to health insurance. For restaurants it’s also a way to engender repeat business; a lot of people would be glad to know they’re eating somewhere that treats employees well. And it’s better for customers because menu prices aren’t raised; the charge is optional (something Rovell also didn’t understand; to him, receiving the check from the server is apparently a binding contract, but if he didn’t want to pay it all he’d have had to do is mention it to the server.)

It's optional Darren. Nothing to hold you back from continuing to be a cheap ass

Of course, telling businesses they should do things differently based solely on the fact that he’s a moron isn’t new for Darren.

Note to all hotels: Please don't buy this bath gel in mouthwash color. That did not taste good pic.twitter.com/zjzoumAg0E

At the very least, Darren would be thrilled to know he has a brand.