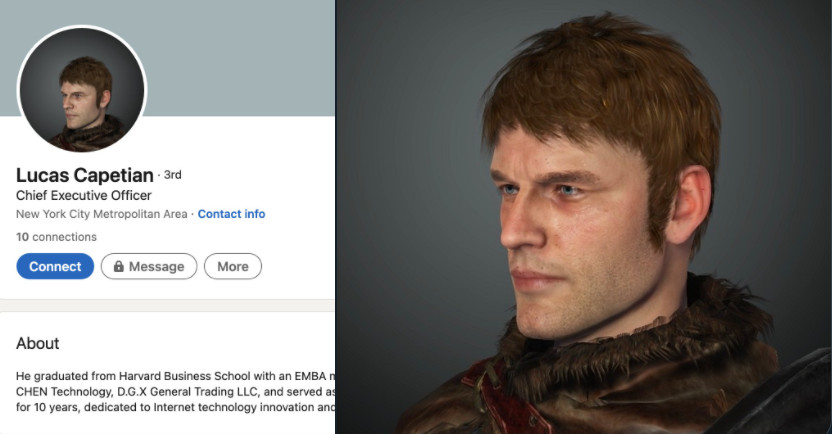 One of the stranger stories in recent times has been the Defector (the subscription site founded by and run by former Deadspin staffers following their mass resignation from G/O Media) coverage of Color Star. Color Star Technology Co. Ltd. came to Defector’s attention as the result of them signing a partnership with the Philadelphia 76ers, which led to Defector’s Maitreyi Anantharaman and Chris Thompson publishing two remarkable stories looking into all the incongruities around this company, titled “What The Hell Is This Company The 76ers Just Partnered With? (on Dec. 23) and “76ers New Metaverse Partner Somehow Getting Weirder” (on Jan. 5, bylined by Thompson alone). Now, following the Sixers’ termination of their Color Star partnership Friday (reported by Spike Eskin of WFAN and the Rights to Ricky Sanchez podcast), Color Star CEO “Sir Lucas Capetian” (we’ll discuss the questions around that identity shortly) has finally responded to Defector’s requests for comment. And he did so with a threat of legal action, as Anantharaman and Thompson discuss in a new Defector story published Wednesday, titled “Metaverse Company Blames Unlikely Third Party For Recent Misfortunes Following Termination Of 76ers Partnership“:

A 76ers team official confirmed to Defector Friday evening that the termination of the partnership was due to “breach of contract” by Color Star, but ignored a series of questions about the nature of the breach. Color Star Director of Communications Douglas Menelly did not respond to a text message seeking clarification; elusive and mysterious Color Star CEO Sir Lucas Capetian did not comment on the alleged breach of contract that led to the termination of the 76ers partnership. But out of the darkness did come a ray of glorious light: Defector, after almost a month of frustrating failure, finally established direct contact with Capetian.

Color Star’s brand new chief executive, a figure of near-obsession for those of us tracking the Color Star story, emailed Defector Monday afternoon—not to clarify the circumstances of the termination of his company’s marketing arrangement with “a top-level NBA team,” but to warn that his company will “seek legal procedures to pursue all your legal responsibilities and financial compensation” if Defector does not delete two Color Star stories within three days, and issue an apology “without reservation.” It is Capetian’s belief that Defector’s coverage shows “obvious racial discrimination” and has caused Color Star to suffer “great financial losses.”

Most confusingly, Capetian’s letter asserts that Defector “did not get in touch with our company to ensure the correctness and accuracy of your written context,” when in fact Defector spoke directly to Color Star Director of Communications and Company Spokesperson Douglas Menelly for more than an hour on Dec. 22. What’s more, the address that Capetian used to send his email Monday is the very same one that Defector emailed seeking comment nearly four weeks ago, to no avail. Alas.

Here’s that letter they received, as posted on Defector’s site: 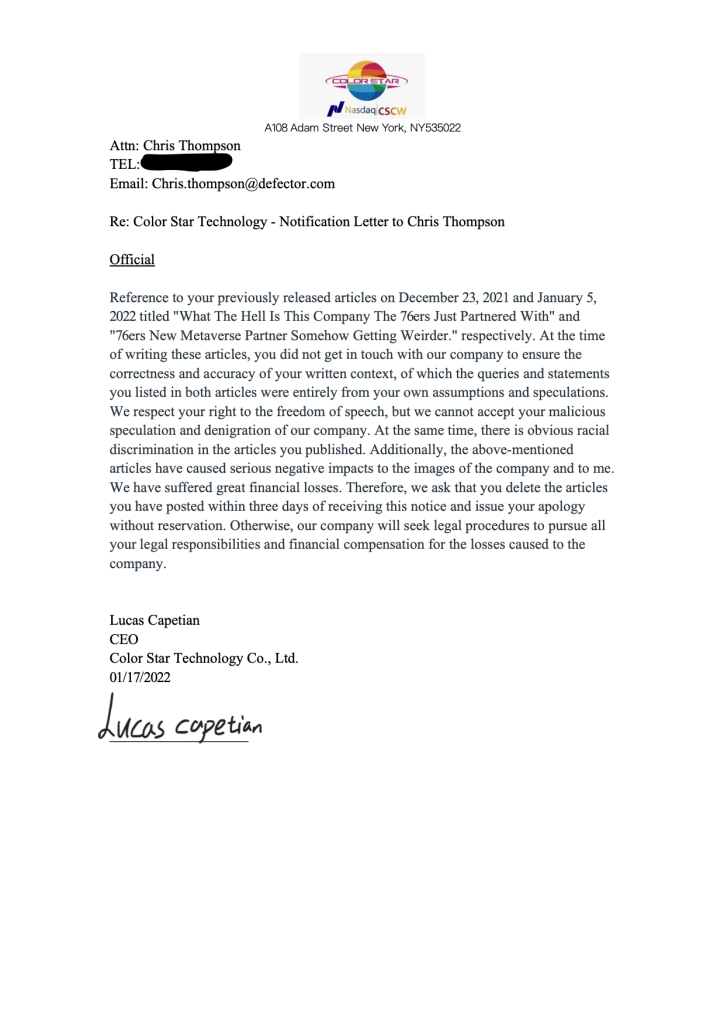 There are a couple of extremely strange things there. One is the assertion that “you did not get in touch with our company,” which Thompson and Anantharaman point out is false considering Defector spoke to then-Color Star “Director of Communications and Company Spokesperson” Douglas Menelly for more than an hour on Dec. 22, a day before they published their first article, and that they emailed the same address “Capetian” used to send this threat with no response. (They also note they reached out to Menelly here for comment, but he “replied to a text message seeking comment on Wednesday afternoon to let us know his corporate communications firm’s relationship with Color Star ended in December.”) The other particularly weird thing is the discussion of “obvious racial discrimination”; it’s completely unclear what that’s referring to, unless it’s the note in the first piece that the links to certificates for World Health Organization courses on “Capetian’s” LinkedIn profile (since deleted, but with what looks like a video game-generated photo, as seen above and below) are in the name of Xiaoyan Huang. But there is nothing that looks like “obvious racial discrimination” in that piece, at least from the outside.

This is the CEO of the company that just partnered with the Sixers. They announced his hiring five days ago. Also, the press release calls him “Sir Lucas Capetian.” pic.twitter.com/xaZvcSOQ92

There also is not much “malicious speculation or denigration” in those articles. They note the incredibly limited information available about that company at that time, including bizarre press releases and a broken website, but that’s not speculation, that’s factual information. And it’s notable that this latest piece from Defector mentions that the website has been updated since then, and that Color Star has put out more information about themselves (although one piece there, an advertorial at Luxury Travel Magazine, potentially caused the termination of the Sixers’ relationship with Color Star, as Eskin noted that Color Star “had been promoting initiatives that violated the terms of their contract with the Sixers”.) There still isn’t a lot to prove who they are or what they actually do, but there’s much more than there was when Defector ran that first story. And saying that nothing much is known about a company or about its CEO, who goes by a name that does not appear to exist in public records and uses what looks like an AI-generated photo, is not “malicious speculation or denigration.”

At any rate, it seems highly unlikely that Defector will delete those articles, as there appears to be very little to support the claims “Capetian” makes here. And it’s worth noting that U.S. libel laws in particular require a very high actual defamation standard versus many other countries; if a plaintiff is a “public figure,” which a CEO would seemingly easily be, an “actual malice” standard is required. So “Capetian” would need to show that Defector not only published something inaccurate, but that they did so “with knowledge that it was false or with reckless disregard of whether it was false or not.” And that’s a very high bar. We’ll see if this leads to anything more, but for now, it’s another strange chapter in the saga of Color Star and “Capetian.”