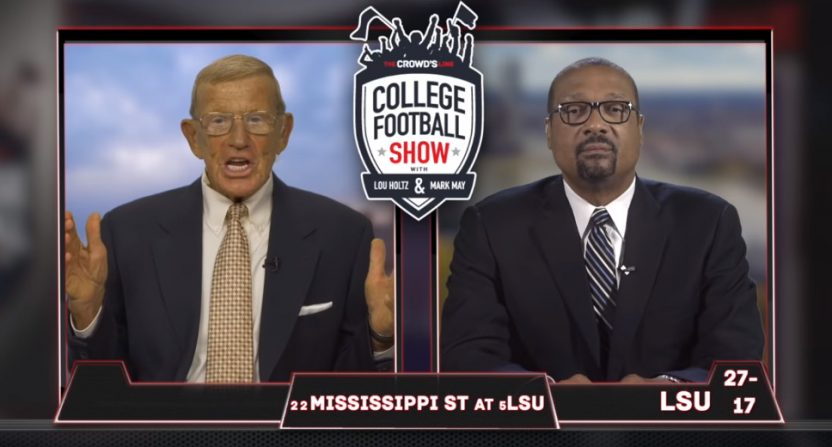 For a decade from 2005-2014, Lou Holtz and Mark May were paired as analysts on ESPN’s College Football Final (May was actually there since 2001, Holtz joined in 2005). Now, they’re partnering again for college football analysis, releasing just an incredible number of videos over the last couple of months for an app/website called “The Crowd’s Line,” which has a “Compete in our FREE College Football Contests With Lou Holtz and Mark May!” banner. By our count, there are 112 of these videos with Holtz, May and host Kevin Trimble currently on YouTube (most have all of them, a couple of those clips have just Holtz or May); there’s an hour-plus College Football Show each week, and it’s then cut into every conceivable part, such as a breakdown of each particular matchup. But there aren’t many people watching.

Here’s a recent example of this, a two-minute Colorado-Washington preview posted Wednesday night with a staggering 12 views by Thursday morning:

However, thousands of views are far more the exception than the rule for this show, as the YouTube numbers illustrate. (And yes, these videos have sometimes been distributed on Twitter and other platforms too, so the YouTube numbers aren’t necessarily all-inclusive, but they provide an example of how much of an impact this is making.) Only eight of the 112 clips/shows have seen over 5,000 views on YouTube, and only one of those is a full show (Week 7).

The others are four Notre Dame previews (Holtz used to coach there, you know, as you’ll be regularly reminded if you watch him), that Texas A&M-Alabama preview, a preview of Ohio State-TCU, and a preview of South Carolina-Kentucky. Meanwhile, only 17 of the 112 clips/shows have pulled in at least 1,000 views, and 44 of the clips/shows have been watched less than 100 times. (And consider that some of those views may be from the same people returning to a clip later, perhaps making the audience even smaller.)

It should be noted that some of this is about the channel, not the content. The Crowd’s Line only has 688 YouTube subscribers and 1,989 Twitter followers, and while Holtz (152,000 followers) and May (90,000 followers) both have bigger followings than that, their approach to promoting Crowd’s Line content has been scattershot at best. Holtz has put The Crowd’s Line’s website in his bio and has tagged their Twitter account repeatedly, but hasn’t tweeted a link to a clip or the website since September (he did once quote-retweet someone listening to their podcast, and he did retweet the main account’s full episode links a couple of times last month, but that’s about it). May has at least plugged the website repeatedly and straight retweeted a couple of clips, but he’s not going all out on promoting this either.

And yes, this would likely draw a lot more viewers with identical content but a bigger platform, and yes, even these relatively-small viewership numbers may be a success for The Crowd’s Line. At the least, they’ve made some people aware that they exist. But at the same time, it’s rather fascinating to see Holtz and May doing much of what they were doing at ESPN, bantering back and forth about games weekly, but doing so for an audience that’s so much smaller.

And that maybe speaks to where those personalities are in 2018; there’s a reason their last College Football Final debate was in 2014. Holtz appeared to leave of his own volition after that season, but he was 78 at the time (he’s 81 now), and while it’s possible ESPN might have kept him around longer if he’d wanted to stay, it’s far from a sure thing given all the criticism his analysis brought in the last few years. And May’s long–running cartoonish Ohio State bashing (and other dumb comments posing as analysis) eventually proved more trouble than it was worth, with ESPN deciding to move on from him on College Football Final as well after Holtz’s retirement, creating much rejoicing in the college football community.

Replacements Adnan Virk, Joey Galloway, Danny Kanell (2015-16) and Jesse Palmer (2017-present) have drawn some criticism at times as well, but the general reaction to them seems much more positive than it was for Holtz and May (especially during the last few years of their tenure together). And there’s a reason ESPN barely used May after they took him off College Football Final. (He was eventually let go in last April’s layoffs.) But hey, if people out there are pining for May and Holtz, they now have that option. And it looks like a thousand or so people are doing that each week.