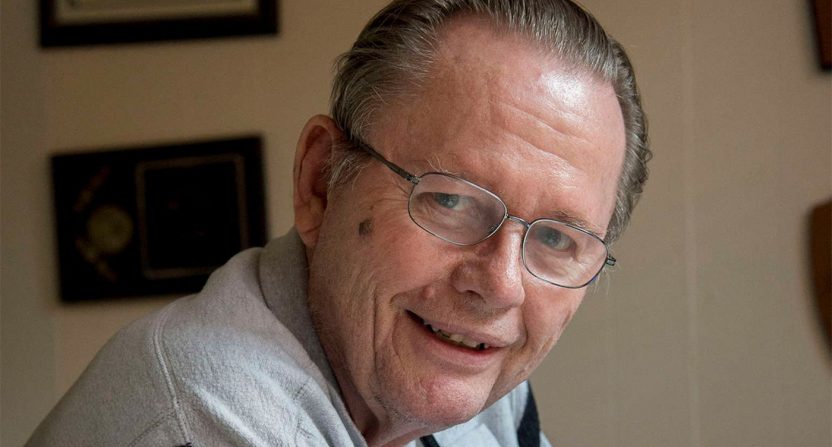 Bill Lyon had a career that many sports writers dreamed of. He wrote about pretty much every major Philadelphia sports story over the past 45 years including the Eagles victory in Super Bowl LII. On the day of that Super Bowl rematch, Lyon passed away at the age of 81.

Lyon suffered from Alzheimer’s and Parkinson’s but if you talked to his peers, his friends, or read his writing, it was clear he fought to the bitter end. Over the past few years, Lyon wrote a series of columns about fighting Alzheimer’s as well as the loss of his wife Ethel, who passed away in 2018.

Joining the Philadelphia Inquirer in 1972 as an assistant business editor, Lyon moved over to the sports beat the next year and had the chance to cover so many prestigious events. He covered the Super Bowl, World Series, Olympics, Masters, Stanley Cup, and Final Four multiple times as well as the Triple Crown and many boxing title fights.

Lyon was there for the biggest Philly (and Pennsylvania) sports moments. Beginning with John Cappelletti’s Heisman Trophy winning campaign, Lyon was on hand to cover championship victories from the Phillies, Flyers, 76ers, and Villanova men’s basketball. Lyon was inducted to the Philadelphia Sports Hall of Fame and won multiple writing awards, including two Emmys. In the Inquirer’s eulogy of Lyon, they noted that before Lyon came to Philadelphia, he was covering Illinois high school sports with legendary film critic Roger Ebert. Ebert noted Lyon as an influence as his advice to Ebert helped kickstart the rest of his career. Lyon retired in 2005 but occasionally wrote for the Inquirer over the years.

Many within the industry as well as his Inquirer colleagues paid their respects to Lyon, including Jim Nantz who noted Lyon’s passing during the Patriots-Eagles broadcast. It’s clear that anyone who read Lyon’s work as well as those who got to know him were better for that and that may ultimately be Bill Lyon’s legacy within the industry.

RIP Phila Inquirer columnist Bill Lyons. He was a gentleman who write exquisite prose and uplifted our profession. When the indiscriminate disease known as Alzheimer’s strikes such a brilliant mind as his it is exponentially more insidious than usual.

“Bill Lyon, a literate, sensitive and affable Midwesterner who endeared himself to this cynical Northeastern city during more than 3 decades as a must-read Inquirer sports columnist, died Sunday at the Marple Twp. facility where he’d resided since 2013.” https://t.co/tcMuE5FHJL

What a loss. What a life. We were so lucky to have Bill Lyon writing on Philly sports for so long.https://t.co/G7PdDbMwd0

Here’s how great a guy Bill Lyon was: I started covering the Big 5 when I was still in college. The local paper I worked for said I could cover Temple’s run in the NCAA Tournament, but they wouldn’t pay travel expenses for a stringer. Lyon let me crash on the couch in his room

My freshman year homework from Brother David Rogers in his La Salle HS writing class was to read Bill Lyon columns. Greatest homework ever. Bill passed today. Glad I got to know him well in this business. RIP to a brilliant writer and true gentleman. https://t.co/S1kY64TCtC

RIP to Bill Lyon, who passed at 81 today. #Eagles just had a moment of silence for him in the press box.

Bill Lyon made me want to write. May his memory be a blessing. https://t.co/KtAb9JSqWo

First time I met Bill Lyon I was in awe. We were walking up the ramp at the Vet. I said, “sir, how do I become a columnist like you?” He walked along, paused.

“Write columns,” he said dryly. And then he told me much more, and I’ll cherish it forever.

RIP to a legend. https://t.co/am0bdzcuWZ

We were so lucky to have Bill Lyon in our world and to have read his words. Won’t be another like him.

Bill Lyon was probably the first real writer I ever read, as a kid in the Philly suburbs devouring the sports section of the Inquirer every morning. So sorry to hear this https://t.co/GYZa9WpseG

Rest in peace to, as Mike perfectly describes Bill Lyon to the readers he served, "the standard." A truly great one. https://t.co/mreYm9khUh

The last time, and one of the few times, I had the pleasure to edit a column by the great Bill Lyon. RIP. https://t.co/r2Zi1UG8DB

I worked alongside the great Bill Lyon for 2 decades. The privilege was mine

Bill’s talent was awe-inspiring to all of us. His ability to write brilliant work, in the moment, on crushing deadlines, was miraculous

And he was classy, gracious and warm to everyone. RIP, My friend https://t.co/x4yOtzWOh3

I have rarely ever received higher praise in this town than when Bill Lyon told me once that he recognized me and appreciated my work.

I started reading his columns in college at Penn, and for 16 years now have had the privilege of writing for his newspaper.

Was lucky enough to meet Bill Lyon in 2018 when I was still writing, and ask for advice. He told me everyone wants to write about success. About winners. Go to the losing locker room. That's where the human stories are.

He wouldn't have remembered that conversation, but I will. pic.twitter.com/L6DdED9cat

RIP Bill Lyon, the best of the best, a beautiful writer, a more beautiful human being.

RIP to award winning sportswriter Bill Lyon. “Combining a poet’s eye with a sentimental grandfather’s heart,” Lyon was one of the best ever. https://t.co/yk5RaIspt4