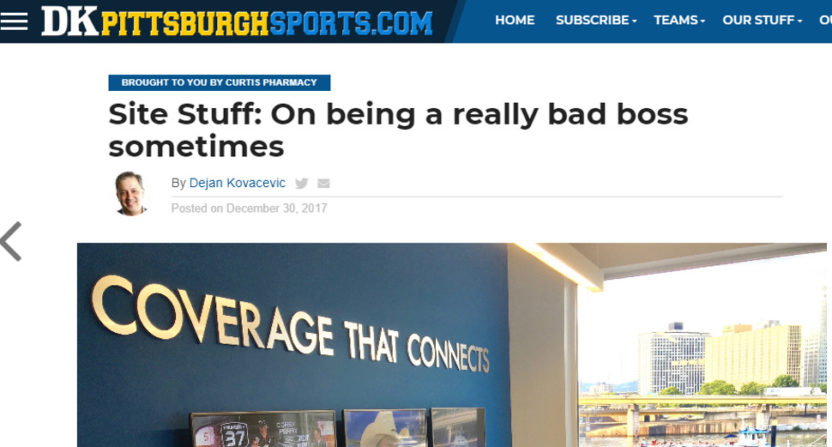 Former Pittsburgh Tribune-Review columnist Dejan Kovacevic’s independent DKPittsburghSports subscription site has made plenty of headlines over its three and a half years of existence, from Kovacevic’s move to leave and start his own site in the first place to his work helping others like Greg Bedard launch similar sites to his desire to avoid comparisons to The Athletic to his public criticisms when The Athletic launched a Pittsburgh site of their own (despite promises not to).

The site has also been in the news on the personnel side; they’ve had a lot of writer turnover (so much so that someone has started a Twitter account to monitor it/otherwise criticize Kovacevic), and some former employees have publicly criticized Kovacevic on a variety of fronts.

The latest to do so is Katie Brown, who joined the site at the end of September after working for NHL.com and other outlets, was let go at the end of November, and published a Medium story about her experiences there last week. The whole thing is worth a read, but her key allegation is that Kovacevic accused her of not knowing hockey (despite his glowing praise for her when he hired her), limited her role, didn’t pay for certain expenses, tried to switch her to per-piece compensation instead of salary, and eventually fired her via text:

After about a month after I was hired at DKPS, sometime at the end of October, Dejan Kovacevic became convinced that I didn’t “know hockey.” He told me so at a game after he promoted someone else as lead of the Penguins beat and sent out a group text, which I asked him about. He then proceeded to say I didn’t know hockey and just parroted what others said so I’d fit in with other media members. It was deeply offensive.

He even sent texts to other staffers discussing this. He repeatedly sent texts reminding me of it. I had trouble sleeping, wondering what I’d wake up to every day. It never stopped.

Not long after, there was a meeting with Dejan, his wife and another staff member. It was bizarre. It felt like an ambush. My work was trashed — work that had been previously praised. Dejan was also upset I talked to people on twitter and had friends on the road. He continued to tell me I didn’t know hockey and that I’d misled him and his wife in my interview. He said I’d tricked everyone I know to this pony that I knew the sport. It seemed like he wanted me to say I knew nothing and that I was a liar. To what end, I don’t know. But I wasn’t going to cop to something that wasn’t true. Apparently there was a “cool kids club” on twitter that I just wanted to fit into. It was the most insulting and infuriating thing anyone has ever told me professionally. I was in tears at one point.

…Dejan finally came over to speak with me. He said I didn’t care about news and thus couldn’t be trusted with daily coverage, which didn’t make any sense considering I’d handled almost every news story since I was hired. He promised I’d make just as much getting paid per piece as I would on salary — basically, it would be my fault if I didn’t work hard enough. I knew this was happening because he wanted to move the new guy in and push me off everything. He was trying to get me to quit. I told him there was nothing left to discuss unless it was about continuing with my current duties.

Later that night, Dejan texted to inform me that I was no longer with the company. I wasn’t shocked. Though he had ample opportunity to tell me in person, he claimed he didn’t because I was “behaving erratically.” 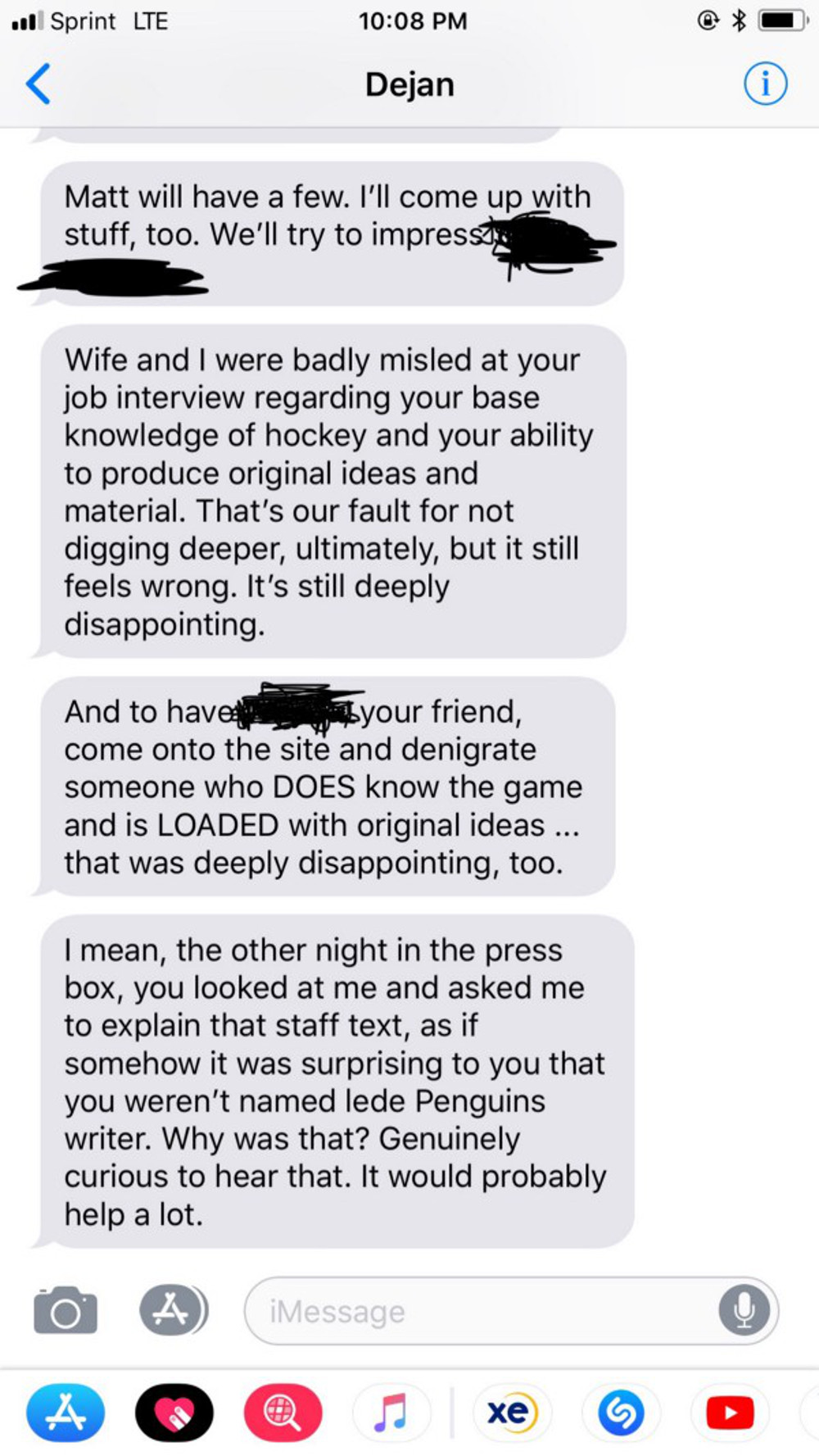 Other former DK Pittsburgh Sports writers supported Brown on Twitter, and this led to a lot of criticism for Kovacevic. He responded in a piece titled “Site Stuff: On being a really bad boss sometimes” the next day. Here’s how it starts:

Being a reporter never prepares one for being a boss. Well, maybe it does for somebody somewhere, but it sure didn’t for me. And I haven’t always been the best boss.

I’ve been emotional, I’ve been rash, I’ve put things out publicly that I shouldn’t have — that’s what reporters do, right? — and occasionally I’ve been tough on some of our staff. Not yelling-and-screaming tough. That’s not in the DNA. But tough in maybe the more annoying way, poking and prodding and even putting someone down in the hope of getting a better result. Or maybe in asking too much from someone in a given day or week.

Just blurting this out, but when it comes to this business, I can be a jerk.

Not with everyone, certainly, but with enough people that the label is fair.

Especially being in charge of a company that’s this young, this small, mistakes like that can’t be common. And when they do occur, regardless of who’s at fault, I’ve needed at times to be a heck of a lot better in managing it than I’ve been.

Kovacevic goes on to discuss and link to Brown’s piece, argue that “we did, as a company, everything conceivable to help her succeed” and “strictly from our end, we did a ton,” but then say he regrets the way he communicated with her:

I was disappointed in myself upon reliving some of that communication that’s screen-grabbed in her piece about how … nasty it came across. I didn’t like reading it. I didn’t like hearing it in my own voice. And again, I’ve been that way with others, as well.

I wish I’d found a more mature, more productive way to convey what I wanted to say, and I mean that in more cases than one.

So, even Kovacevic admits he didn’t handle that situation well, but his piece certainly isn’t a full apology either. And his response has received further criticism, but so has Brown’s initial piece, which brought her a lot of Twitter wrath from fans of Kovacevic. (Including one who started an anonymous account to regularly point out she doesn’t have a full-time job now.) Oddly enough, some of that criticism towards Kovacevic came from former ESPN reporter/current political opinionist Britt McHenry:

How some men still treat women in sports media. This same male writer made up a story I asked to interview a player in quarantine (team PR apologized profusely). Next day, he joked on a Penguins affiliated radio, I should go into the adult film industry. Good for you, Katie. https://t.co/QUob1BOXSm

There’s maybe a wider conversation here beyond DK Pittsburgh Sports, too, stemming from Kovacevic’s comment that “Being a reporter never prepares one for being a boss.” That’s not entirely true (many reporters have gone on to be good editors), and it’s not an excuse that justifies problematic behavior, but it is perhaps worth discussing how the larger move towards subscription sites has led to many people primarily known as reporters and columnists now being bosses.

Running a site and managing writers is a notably different role than just writing, and mishandling it can create big problems. That hasn’t produced other controversies near this level yet, and it’s not fair to say that every columnist-turned-boss is necessarily bound for controversy, but it’s something worth keeping an eye on in this media environment. And it’s also worth keeping an eye on where things go for DKPittsburghSports from here.