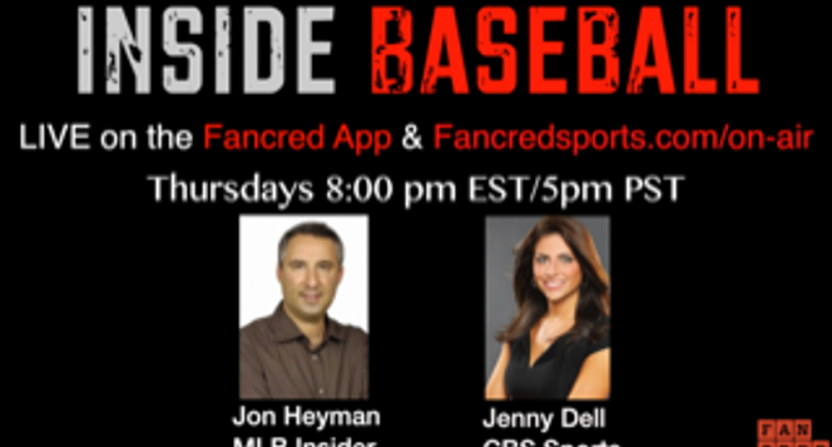 MLB Network insider Jon Heyman’s columns moved from FanRag/FRS Sports over to Fancred in June as part of Fancred acquiring certain FRS assets, with Heyman viewed as a key part of that deal. Heyman is now also going to be doing a video show for Fancred, “Inside Baseball,” alongside CBS reporter/CBS Sports HQ host Jenny Dell (who formerly covered the Red Sox for NESN). The first show will air Thursday night at 8 p.m. Eastern on the Fancred app and Fancred’s site, and it will feature viewer participation, with fans able to do video call-ins from their phones via the app. It’s also scheduled to include notable guests, including Baltimore Orioles’ GM Dan Duquette to discuss the Manny Machado trade. Heyman spoke to Awful Announcing Wednesday and said he’s excited for the new show.

“I think Jenny Dell is fantastic and I’m really looking forward to working with her,” Heyman said. “She’s quite a professional, terrific at her job, and she’s got a really upbeat personality, which is a nice balance with me, so I think it will work out great and we’ll be a great team.”

Heyman’s no stranger to on-air appearances thanks to his MLB Network work, but he said serving as one of two co-hosts will be a different challenge than what he’s usually doing.

“Since I’m only one of two people I’d better be prepared, there’s a little more pressure,” he said. “MLB Network, we usually have a panel. Sometimes somebody can carry a topic, but in this case, I’m going to have to do a lot of studying and make sure I know everything that’s happening at that moment. Nothing wrong with that, though, because it’s the trade deadline and I should know everything that’s going on.”

“But it’s maybe a little bit more pressure because it’s our show, there’s only two people, and we’re both headlining the show. When I usually go on MLB Network, I love it, but I’m a bit player. I’m usually on Brian Kenny’s show, or the host completely drives the show, especially when there are two or three analysts. In this case, I’m the analyst, so there’s going to be a lot of preparing. …. But we’re working hard on it, we’re working on guests, things like that. It could be news, there could be a serious side to this too.”

He said this is a great time to launch the show, as there’s a lot to talk about in advance of the July 31 non-waiver MLB trade deadline.

“We’re going to discuss a lot of inside things that go on in baseball, whether it might be trades or speculation of who’s fired or hired, different things that go on inside the game. Certainly analysis and discussion and opinion and that, but from my side, we’ll play to my strengths with inside information, trade speculation. And it’s well-timed since we are starting in late July, the timing is good. ”

The fan participation element of this is also a change for Heyman, and he said video call-ins like this are an interesting new idea for this kind of show.

“Well, it could be interesting. We’ll see what they have to say, but this is an unusual thing,” he said. “I haven’t seen it before, and it should be interesting to see what kind of reaction we get. …Call-ins have been very successful, and here we’ll be able to see the person. Hopefully everybody will behave nicely.”

As per moving his column over to Fancred, Heyman said that transition has gone well so far, particularly praising editor Cam Smith.

“It’s been seamless,” he said. “I send in a million notes and they have usually about a hundred thousand typos in there, and they bat about 99 percent, just like they did at FanRag. I give these guys credit who deal with me. It’s been the same in terms of the writing, which is great, and this will be a little extra thing, which I think has the potential to be really fun.”

And he said he’s excited to launch this show and see how it goes.

“Working with Jenny is going to be fantastic. She’s absolutely terrific. She’s a real pro, very seasoned although very young, obviously. I always enjoy her at the ballpark and I think it’s going to be a great team. And I’m curious to see how it will be with the fan reaction, but I think it has the potential to be a lot of fun. And certainly it could be unpredictable, outlandish, zany. We will find out, I guess.”

Here’s more on the show from a Fancred release:

“Inside Baseball will be our first MLB program on Fancred On-Air. Jon Heyman is at the forefront of breaking baseball news and Jenny Dell is a star co-host and the former sideline reporter for the Red Sox and host on CBSHQ. She is a very knowledgeable baseball story teller. Fancred’s On-Air programming is now watchable both outside the App online at FancredSports.com, and fans can join the show On-Air by downloading the App and using the proprietary Fan Line” said Andrew Miller, President of Fancred. “We also are in advancing discussions with a brand name media company to air ‘Inside Baseball” on their platform” added Miller.