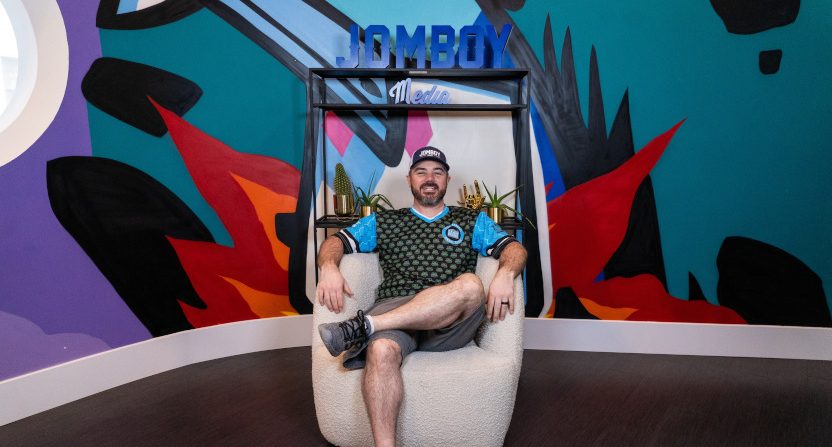 The last few years have seen massive growth from Jomboy Media. The multimedia company was launched in 2018 and started with a YouTube show on the Yankees from founder Jimmy O’Brien (seen above) and partner Jake Storiale (a former high school baseball teammate of O’Brien’s who joined that Yankees show after a few episodes), then turned into a more general baseball show, saw O’Brien’s @Jomboy_ Twitter account particularly take off in 2019 particularly around detailed video breakdowns of the MLB sign-stealing saga, raised $1 million from an impressive list of investors including former players and executives in 2020, added prominent names like Chris Rose and Ian Happ (seen at right above with last year, and struck a content partnership with YES Network earlier this year. Now, they’ve raised another $5 million in a new round of financing. Here’s more on that from a release:

O’Brien and partner Jake Storiale have leveraged their social media presence to grow Jomboy Media into one of the most sought-after multimedia sports brands that focuses on the creation (and distribution) of original content for podcasts, television shows, remotes and new IP.

The new funding will be used to fuel growth into all major North American sports, as well as development of original content for television and streaming platforms, new IP for Jomboy Media’s growing array of channels, podcasts, live events around tentpole sporting events and the acquisition of marquee talent to live under the Jomboy Media umbrella.

Additionally, the company will be using the new funding to further their internal infrastructure, with the goals of hiring a CEO, executives to focus on internal PR and Marketing, as well a more robust sales and merchandising team.

The raise was led by Connect Ventures, an investment partnership between leading entertainment and sports agency Creative Artists Agency (CAA) and global venture capital firm New Enterprise Associates (NEA). Adam Friedman, an Executive at CAA and Investor at Connect Ventures, will also join the board of Jomboy Media.

That list of investors is impressive, and it perhaps speaks to what the release is saying above about growing Jomboy’s presence in other sports. On the basketball front in particular, having Towns, Wade, and Cook on board is notable. And Ohanian’s a very notable name for a couple of reasons: beyond his work as co-founder and continued executive chairman of Reddit, he’s also married to Serena Williams. It’s interesting to see WWE investing in this as well, but that makes some sense for them; they’ve been making some content investments outside their traditional TV broadcasts lately, including partnering with The Ringer for an audio content network at Spotify, and WWE president Nick Khan is well-known for his eight years at CAA (which led this funding round along with NEA through Connect Ventures), so he certainly has some connections to the current CAA leadership. It’s interesting to see more baseball stars coming on board, too, including New York names Sabathia and Syndergaard as well as Hader and Turner. And that release also has some notable quotes, including this one from O’Brien:

“Connect Ventures is a perfect partner for Jomboy Media. We are really excited about their ability to scale the Jomboy Media brand across multiple verticals. We’ve enjoyed working with their team as Jomboy Media is already on track for its biggest year ever in 2022. I believe so deeply in what we can become and I love that we have a partner who shares the same enthusiasm for the future and wants to support our company in getting there.”

As per Jomboy’s release, they boosted their revenue four times from 2019 to 2020, and then saw further 500 percent revenue growth from 2020 to 2021. So this has been a company that’s growing quickly. And it will be interesting to see how their trajectory goes now after this major funding boost, and how their planned expansion of other sports content plays out.