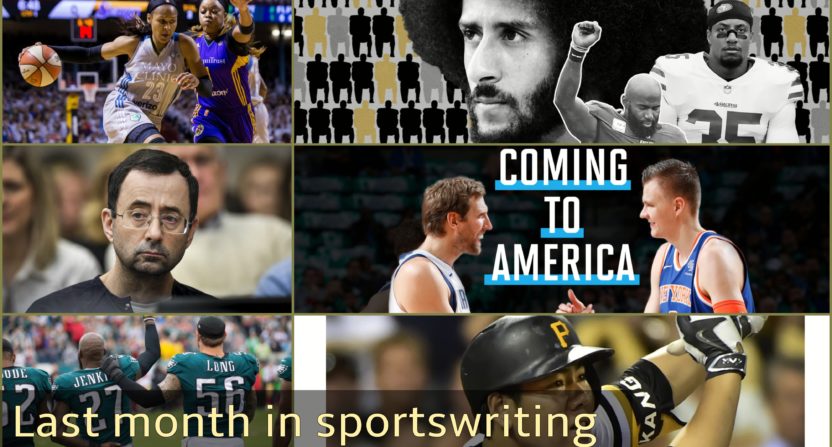 Without further ado, here’s the best in sportswriting from the month of January.

Sportswriters of the month: The Indianapolis Star, Lansing State Journal, Detroit News and others who covered Larry Nassar all along

By the time the Larry Nassar sexual abuse scandal hit mainstream consciousness in January, many news outlets had been doggedly reporting the story for months. The Indianapolis Star first published allegations against the doctor back in September 2016. The Lansing State Journal covered Nassar’s abuses from the start and revealed in December that Michigan State had allowed him to see (and abuse) patients while under criminal investigation. And the Detroit News held the school, and particularly president Lou Anna Simon, accountable for repeatedly failing to stop Nassar.

It’s no exaggeration to say that without reporters at these publications, Nassar might not have been exposed and his enablers might not have faced consequences. There has rarely been a better example of the value of local news.

You can’t tell the story of the NBA without touching on the influx of foreign-born players, and you won’t find that phenomenon covered more thoroughly than it is here. This lengthy oral history has an awesome blend of fun stories, amusing quotes and genuine insight into what life is like for NBA players from Europe, Africa and South America.

Maya Moore: A Pioneering Spirit; by Jemele Hill, The Undefeated

Maya Moore is one of the most thoughtful and insightful athletes in America (not to mention most talented), and her back-and-forth with Jemele Hill feels natural and comfortable in a way interviews with superstars rarely are.

The NFL turned Ryan Shazier into a feel-good story before anyone had a chance to feel awful about it; by Drew Magary, GQ

This post asks a provocative question: Is celebrating Ryan Shazier’s slow recovery from a spinal injury just a way of changing the subject away from the brutality that caused it?

The passion of Patrick Ewing; by Patrick Hruby, Washingtonian

This is a compelling and readable profile of a Georgetown hero who returned home to coach (with a really cool lead image, by the way).

A look back at Latrell Sprewell’s very angry ‘Sports Illustrated’ cover; by Julian Kimble, The Undefeated

Ten years ago, Sports Illustrated put a screaming Latrell Sprewell on its cover. This thoughtful piece examines that image in the context of how media too often portrays black people.

Serena Williams on motherhood, marriage, and making her comeback; by Rob Haskell, Vogue

If you know Serena Williams as a fierce competitor, here’s a chance to get to know her as a vulnerable new mother.

Belichick and Saban: The stories behind football’s most powerful friendship; by Jenny Vrentas, Sports Illustrated

The best college coach and best NFL coach of their generation have been buddies for decades, and Jenny Vrentas got them to cough up all kinds of good stories about their friendship.

An illusion of unity; by Sam Borden, ESPN

Think the Olympics could help bring together North and South Korea? Sam Borden’s on-the-ground reporting explains why it’s not so simple.

The five pillars of Popovich; by Ira Boudway, Bloomberg

This piece subverts the expectation for a business-magazine profile of a sports coach and winds up providing some fascinating context for Gregg Popovich’s remarkable success.

The rise, and the shame, of Jung Ho Kang; by Stephen J. Nesbitt, Pittsburgh Post-Gazette

The Pittsburgh Post-Gazette ventured to the Dominican Republic to cover Jung Ho Kang’s flailing career, and although he was gone before they got there, the resulting piece was illuminating.

Here’s why baseball’s economic system might be broken; by Jeff Passan, Yahoo

No one has done a better job covering baseball’s slow offseason and fraught labor situation than Jeff Passan. This piece should be required reading for fans wondering why their favorite teams haven’t signed any star players this winter.

Behind Kyrie Irving’s controversial departure from Cleveland — and what he hopes to find in Boston; by Jackie MacMullan, ESPN

Kyrie Irving stunned the basketball world by forcing his way out of Cleveland last summer, and Jackie MacMullan does her best here to get to the bottom of why.

By the end of the season, protests were no longer the NFL’s hottest topic, but that didn’t make them feel any less vital to the handful of players who demonstrated all the way through Week 17. After reading this, you can’t possibly be confused about the activists’ purpose.

It turns out Nassar’s abuse was but one aspect of a damaged culture in the Michigan State athletic department. Outside the Lines exposed flippant treatment of sexual assault not only in the Spartans’ gymnastics program but also in the football and basketball programs.

Change never comes about easily, as the leaders of any social movement will tell you, and this piece pulls back the curtain on tension among NFL activists while delicately avoiding judgment on a loaded debate.

Tonya Harding would like her apology now; by Taffy Brodesser-Akner, New York Times

No matter where you fall on Tonya Harding’s public redemption, this profile by the always-great Taffy Brodesser-Akner offers a compelling look at one of sports’ most infamous villains.

By the time this OTL report was published, America had begun to recognize Larry Nassar’s abuses, but the various Michigan State and USA Gymnastics enablers had gone largely unpunished. This story, and others like it, went a long way toward changing that.