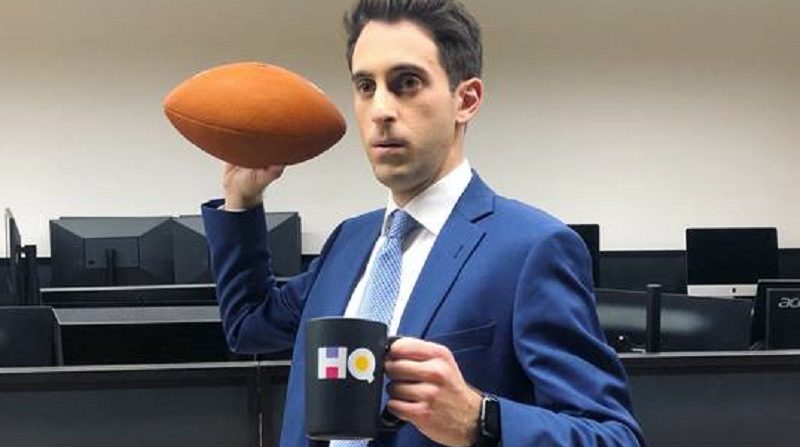 Fans of sports trivia, football, and fantasy sports can get a quick, fun dose on Thursday nights with the new Hall of Trivia show on the HQ Trivia app.

Hosted by Jeff Eisenband, the game is played every Thursday at 8 p.m. ET, right before Thursday Night Football (and the nightly HQ Trivia game at 9 p.m.). Hall of Trivia gives contestants a chance to answer 10 football and fantasy-themed questions related to the current NFL season and the sport’s history. Those who answer all 10 questions correctly share a cash prize of $2,500.

On Thanksgiving, a special edition of Hall of Trivia will offer 12 questions to participants and a $10,000 prize pot to share. Launched five weeks ago, the show has been building toward this big event for fans to enjoy during the holiday leading up to the big matchup between the Ravens and Steelers Thursday night.

Our Thanksgiving #HallOfTrivia special this Thursday is for $10,000! We’ll have 12 football and fantasy questions ready to go at 8 pm ET if you want to add some extra stuffing to your wallet. ???

“We really want to make it something special on Thanksgiving when people are at home with their families, sitting around,” Eisenband told Awful Announcing. “We’re in a pandemic. People want to feel good, they want forms of entertainment. And on this marquee football day, why not play some football trivia at eight o’clock?”

Along with the trivia game, fans also get an opportunity to play in a season-long “Start/Sit Fantasy Pick ‘Em Pool” contest. Participants are given two or more NFL players for a particular week and have to pick the one who they think will score more fantasy points. Those who make the most correct selections over the course of the season will share a $10,000 cash prize.

Additionally, Eisenband tweets out a “Halftime Tweet and Greet” question earlier in the week and the best response will be read on the show between Questions 5 and 6 of the game.

Tonight's "Halftime Tweet and Greet" question (best response will be read on #HallOfTrivia on HQ):

If you had a time machine and could go back to your fantasy football draft at the start of the season, what decision would you change? @hqsports @hqtrivia

The Hall of Fame Resort & Entertainment Company is behind the new HQ Sports show, which is a co-production of the company’s fantasy sports brand, The Hall of Fantasy League, and HQ Trivia.

“Our goal for the show each week will be to entertain fans and leverage key Pro Football Hall of Fame talent while garnering attention for the HOFL as we look toward the 2021 NFL season,” said Mat Sposta, Principal with the Hall of Fantasy League. “We look forward to announcing more details on the structure of the HOFL and its rules in the coming months.”

Often joining Eisenband on the show will be an NFL Hall of Fame player or coach, or a personality from the sports or fantasy sports world to provide analysis and commentary on that week’s slate of games. Anthony Munoz and Curtis Martin have been among the pro football legends who have appeared on Hall of Trivia. This week’s guest for the Thanksgiving edition will be Marshall Faulk.

11 Pro Bowls, an NFL Man of the Year Award and now, guest host for #HallOfTrivia.

Eisenband’s on-camera experience hosting shows on the NBA’s Twitch channel and the NBA 2K League made him an ideal choice to host Hall of Trivia and bring an audience to the show. His writing background also played a big role in shaping the show and developing scripts.

“I was Jeopardy!-obsessed, trivia-obsessed, HQ-obsessed,” said Eisenband. “So for me, it’s been a dream come true to be at this point. Trivia has always been something that’s been a part of me.”

Related: Why ‘Jeopardy!’ contestants tend to do so poorly with sports categories

According to Sposta, Hall of Trivia was initially conceived as a Sunday night show but then producers decided it was better to kick off the NFL week on Thursday. Eventually, Hall of Fantasy League hopes to expand the game to other sports throughout the year.

Hall of Trivia is played on the HQ Trivia app Thursday nights at 8 p.m. ET. The app is available on iOS and the Google Play Store. For more information on the Hall of Fantasy League, visit thehofl.com.