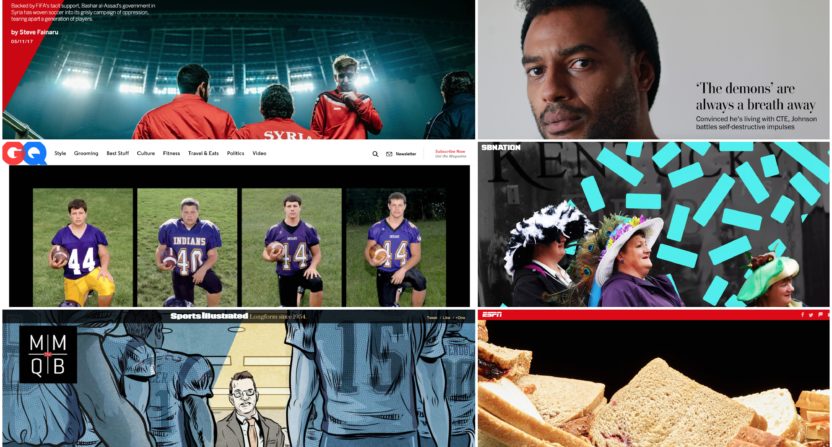 With 2017 coming to a close, we figured we’d spotlight some of the year’s very best writing — including ambitious long-form features but also some columns, essays and Q&As that caught our eye.

For more of the year’s best writing, check out our regular “Last month in sportswriting” series.

‘You can’t give in’: Monty Williams on life after tragedy; by Chris Ballard, Sports Illustrated

Try your best not to cry during this heart-breaking story about NBA coach Monty Williams’ grief over the sudden death of his wife.

This was one of several (here’s another) absolutely gripping columns Dan Wetzel wrote this spring as Aaron Hernandez went on trial for murder and then hanged himself in his cell. Beautiful writing about a non-beautiful subject.

A season under the gun; by Rick Telander, Chicago Sun-Times

This thoroughly reported story brings readers into the lives of teenage basketball players trying to avoid the danger that surrounds them on Chicago’s West Side. It’s an oft-told tale, executed powerfully here here.

This has all the elements of a great true crime piece. The fact it’s about not a gruesome murder but rather a missing football jersey hardly even matters.

Sam Miller took the most mundane subject — a pitcher’s inability to hit — and turned it into a charming blend of mystery and philosophy. Fair warning: this piece might make you question the capability of your doctor.

This was one part chronicle of the Warriors’ trip to a prison and one part personal essay on the author’s own personal journey. Both parts are profoundly compelling.

This feature on basketball players’ addiction to peanut-butter and jelly is quirky and fun and just overall delightful from start to finish.

Within a few hours of the Warriors’ NBA Finals triumph, Lee Jenkins submitted this gem of a story on a title that was a full year in the making.

Q&A with Kevin Durant: ‘I like to remain somewhat of a mystery’; by Chris Haynes, ESPN

Until arriving in Northern California, Kevin Durant had felt distant and unknowable. This frank, revealing Q&A helped peel back the curtain.

Tyreek Hill is a great football player. He also pled guilty to strangling his pregnant wife. Mina Kimes insightfully addresses the question of how those two facts intersect.

This extremely thorough and ambitious project lends unprecedented insight into the life of a Latin-American baseball player.

The death of a teenage quarterback; by Lars Anderson, Bleacher Report

We all know football is dangerous, but nothing brings that fact to life like the abrupt death of a teenager who seemed to have everything.

The Complicated Life and Death of Hideki Irabu; by Ben Reiter, Sports Illustrated

For years, Hideki Irabu was known primary for being George Steinbrenner’s “fat pussy toad.” This gripping profile shows that such a characterization was both reductive and damaging.

The bloodlines of America run through the Kentucky Derby; by Charlotte Wilder, SB Nation

Charlotte Wilder took a dangerous concept — Northerner parachutes to Churchill Downs to observe the Kentucky Derby — and turned it into a sharp essay on class in America.

All year long, Charlie Pierce met the oddities and outrages of the news cycle with fiery, powerful writing. This is one of the better columns of the year.

This piece on the plane crash that killed much of the Chapacoense soccer team is absolutely heart-wrenching.

The spirit of Miles Bridges; by Carvell Wallace, ESPN

Miles Bridges was an irresistible profile subject heading into this college basketball season. Carvell Wallace told his story in a unique, intimate and enlightening way.

The subjects don’t get much heavier than the civil war in Syria, and Steve Fainaru gave this piece on the Syrian soccer team’s embroilment in that conflict the attention and weight it deserves.

‘The demons’ are always a breath away; by Kent Baab, Washington Post

Profiles don’t get much better than this piece on former NFL running back Larry Johnson’s post-playing personal problems. It is truly haunting.

This might be the single best sports story of the year, an absolute must-read for football fans, parents, people who care about mental health and anyone who loves great writing.