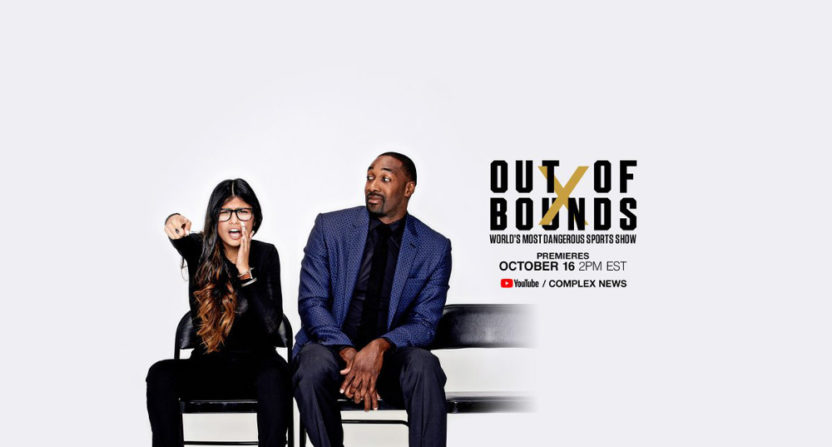 The weirdest possible pairing of co-hosts on a sports show yet might be former Washington Wizards star Gilbert Arenas and former adult film star Mia Khalifa. Starting Monday, Oct. 16, they’ll be hosting Out Of Bounds, “the world’s most dangerous sports show,” on Complex News’ YouTube channel. And Complex appears to have found some unusual ways to promote that, including covering a DM stunt between the two Monday. But first, the show. Here’s a blurb from Complex’s Edwin Ortiz about it:

“I am thankful to Complex for the opportunity and to Gilbert for being a part of it,” Khalifa said. “I can’t wait to offend and upset a whole new fan base.”

Arenas also shared his excitement around the new show. “I always knew that I wanted to work in sports media after retiring, and Complex just made sense. Being able to talk sports while being myself is truly rewarding.”

Complex’s own Pierce Simpson will serve as moderator (or “Coach Pierce,” if you will) as Khalifa and Arenas square up over the biggest stories in sports.

As per Dan Steinberg of The Washington Post‘s D.C. Sports Bog, Complex is throwing out a whole lot of buzzwords here about how this won’t be a normal sports show:

“Out of Bounds,” a daily program scheduled to premiere Oct. 16 on Complex News’s YouTube Channel, will bring “the comments section to real life,” according to a Tuesday news release announcing the endeavor. The show will also personify “the rawness of social media commentary in an authentic way,” according to the release.

…For Complex News, the goal was to create “an anti-sports show sports show,” a program that feels “as close to the commentary that is happening in living rooms and on social media as possible,” according to Noah Callahan-Bever, the company’s chief content officer. And so, the fact that Arenas and Khalifa have made their biggest marks on social media in recent years? That’s a feature, not a bug.

“How are we going to create a product that is competitive in a sports landscape that is fairly crowded, and create a product that is totally differentiated in its voice?” Callahan-Bever asked. “We’re going to have to get people that are totally differentiated in their voice, people that ESPN and Fox would never even entertain putting on their platform, but that are compelling, and that we can demonstrate are compelling. … Just like Gilbert, there is a rawness to [Khalifa] and to the way she talks about sports that I think is going to create a package that cannot be replicated by any of these more mainstream competitors.”

“A rawness…that cannot be replicated by any of these more mainstream competitors”? That sounds an awful lot like the various Barstool Sports offerings, one of which seems likely to be replicated (or at least air on) super mainstream competitor ESPN2. Or any of the other “edgy” media offerings out there. (Well, many of those have pivoted to video at this point, but presumably some of it’s edgy video; we don’t know, because like everyone else, we’re not watching.) Beyond that, though, what’s perhaps more interesting is the story on Khalifa and Arenas that Complex’s Ortiz (the site’s news editor, who wrote Tuesday’s announcement) wrote Monday, “Mia Khalifa Exposed for Sliding Into Gilbert Arenas’ DMs.” Here’s that article in its entirety (it’s linked on the page announcing the show, too):

Former adult film actress turned-social media star Mia Khalifa has put a number of athletes and celebrities on blast for sliding into her DMs, among them: Drake, Ole Miss QB Chad Kelly, and Chicago Cubs player Willson Contreras. But what happens when she’s on the receiving end? We found out Monday when former Washington Wizards star Gilbert Arenas screenshot a private convo Khalifa attempted to start in his DMs.

@miakhalifa would slide in my dm #fortheD ??the thirst is real since backpage is gone ???this #Bihhh has no room for negotiations with me.. $150 or you better slide into #nelly dm for that raw dick behind a #walmart ??

“@miakhalifa would slide in my dm #fortheD,” Arenas joked. “The thirst is real since backpage is gone.”

Khalifa’s management responded to the screenshot with this statement: “Mia Khalifa has acknowledged that her comments were completely out of bounds.”

Though Khalifa has yet to directly address the IG pic, we wouldn’t be surprised if it happens sooner rather than later.

Hmm. Is it possible the guy writing an announcement about his company’s new Arenas and Khalifa show Tuesday independently decided to cover Arenas talking about Khalifa on Instagram Monday, without knowing they were about to announce the new show? Sure…anything is possible. But the timing here definitely makes this look like a PR stunt (the exchange certainly was a stunt, and Complex’s coverage of it may have been as well), and this wouldn’t be the first one of those around Khalifa. (Remember her Twitter fight with the fake Fansided coworker who wrote about her?) And that raises some questions about the “news” posts on Complex (a joint Verizon/Hearst venture, for what that’s worth). Also, the Arenas-Khalifa DMs stunt in general annoyed some:

When you realize Gilbert Arenas and Mia Khalifa faked their DM convo BS to promote their new show… pic.twitter.com/kRaalEn7yq

It’s obvious that Complex thought Khalifa was worth covering long before she signed on to do a show with them, as you can see from the links to all their other Khalifa DM coverage included in Ortiz’s post (and Callahan-Bever told Steinberg the performance of previous stories on Khalifa led to them signing her), so maybe that’s what happened here too. Or maybe they decided to cover a fake feud between the two stars of their forthcoming sports show to help it get some buzz ahead of the official announcement. In any case, Complex will certainly be “bringing the comments section to life” for this Khalifa-Arenas show.

If anyone other than Complex news editors actually wants that, it will be visible starting next week.