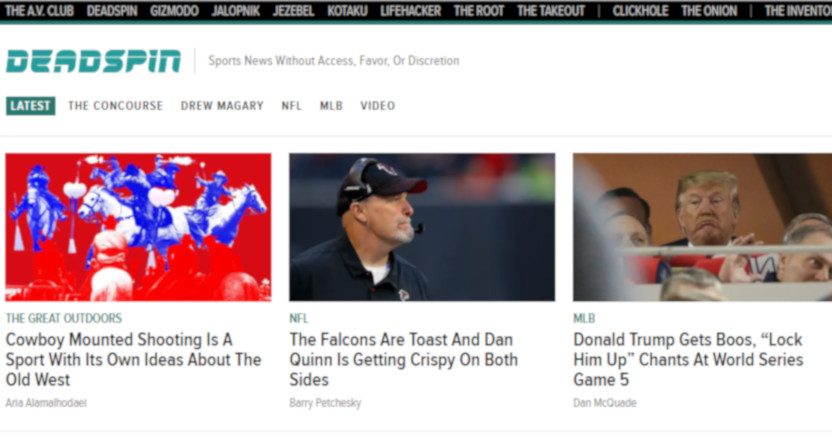 The tensions between employees of G/O Media  (the former Gawker Media sites, including Deadspin, plus The Onion and other sites once owned by Univision, all of which were sold to private equity firm Great Hill Partners in April) and the company that owns the sites appear to be rising further. There have been further efforts to try and force Deadspin to stick to sports, including in a memo leaked to The Daily Beast Monday. And Deadspin published a post Monday airing G/O Media staffers’ complaints about the autoplay ads across G/O Media’s sites, which the Gizmodo Media Group union then tweeted out (along with an email link to complain to G/O Media bosses), and which management then pulled from the site:

Management has removed this post from our sites. https://t.co/RT3SpiN1DO

Wagner went on to state that that’s a violation of the union contract:

also a violation of our union contract

Here’s a screenshotted version of that post from Deadspin’s Kelsey McKinney:

Here is the post that G/O leadership has now removed from all of our sites without warning. Please continue to send emails to g-omediafeedback@googlegroups.com pic.twitter.com/06lsjMU5VZ

TUESDAY AFTERNOON UPDATE: Deadspin deputy editor Barry Petchesky announced on Twitter he had been fired by G/O Media for not sticking to sports.

Hi! I’ve just been fired from Deadspin for not sticking to sports.

It’s certainly unusual to see tensions between a company’s staffers and management play out so publicly. And it’s not just about the ads. The “no politics at Deadspin” part of this has also been extremely public, with Deadspin editor-in-chief Megan Greenwell resigning in August and saying “I have been repeatedly undermined, lied to, and gaslit in my job,” and with G/O Media editorial director Paul Maidment putting out a statement saying “We are laser focused on serving Deadspin readers sports and everything related to sports. Our former editor had a different vision and we wish her well in her future endeavors.” Deadspin has still run plenty of not-sports things after that, including posts like David J. Roth’s “This Guy Truly Has No Idea What He’s Talking About” on Donald Trump, but the leaked memo Maxwell Tani of The Daily Beast published Monday suggests management may be trying harder still to scrub everything not specifically sports from the site:

The top editorial leader at G/O—the new company overseeing Deadspin, Gizmodo, Jezebel, Lifehacker, and a number of former Gawker Media sites—told employees that stories with tie-ins to sports were permitted to run on the site but that they should leave non-sports stories to the company’s other websites.

“Where such subjects touch on sports, they are fair game for Deadspin. Where they do not, they are not,” Maidment wrote. “We have plenty of other sites that write about politics, pop culture, the arts, and the rest, and they’re the appropriate place for such work.”

This is an interesting move on a few levels. For one thing, it’s management trying to tell writers at a certain site not to do what they’ve done for at least the past several years, and doing so in a way that’s produced a lot of blowback both internally and externally. For another, there isn’t even an obvious business benefit, as many of the not-specifically-sports posts (which aren’t even all necessarily politics; other recent Deadspin articles in their The Concourse vertical include “Classic Rock, Ranked,” “Crumbs At The Bottom Of The Cereal Bag, Ranked,” and a review of Joker) have performed quite well for the site when compared to some specifically-sports posts. An element of Deadspin that dates back to the Gawker days is that the views for each post are publicly listed; anyone can view how many people have clicked on anything. And that helps make it clear that prohibiting non-sports stories from running on Deadspin isn’t a traffic-boosting move, at least in the short term. It’s also notable that this memo hasn’t yet done much to eliminate political discourse on Deadspin; for example, Monday evening saw them run a piece from Ray Ratto titled “Nationals Fans Didn’t Stick To Sports,” which included plenty of shots at the idea of “stick to sports”:

That this post doesn’t contain a heaping helping of political vitriol isn’t “sticking to sports” any more than inviting the president to a game, playing the national anthem, “God Bless America,” or the flyover is sticking to sports. Nobody sticks to sports, ever. The point here is simple: Not “sticking to sports,” as in Prez Don and the reaction to it, went well. Okay, well enough. Okay, not horribly. Baseball will take that.

Where this will all wind up is far from certain. It seems clear that the current G/O management have a vision for their sites, and for Deadspin in particular, which is a long way from the vision held by the people who currently write for those sites. And it’s fascinating to see this kind of public pushback from writers against the group that owns their sites. We’ll see where this eventually lands.