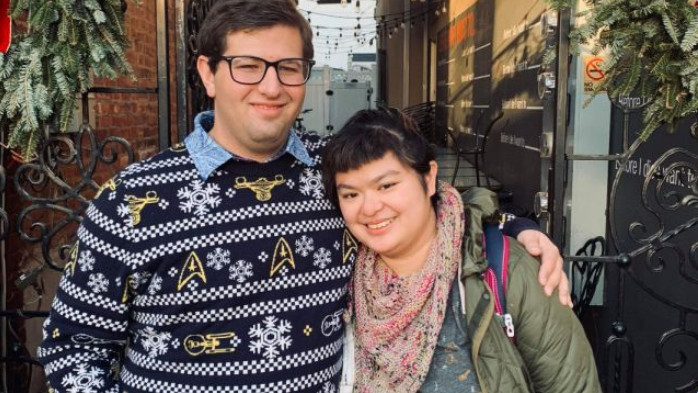 Baseball Prospectus writer Jen Mac Ramos is facing some challenges in the wake of a Sunday morning car crash that severely injured Ramos and killed husband Josh Eisen. Ramos’ family has launched a GoFundMe to help. Here’s the description of what happened to Ramos and Eisen from that page:

On the morning of December 1, 2019, Josh and Jennifer, husband and wife, were driving from her parents’ home in San Luis Obispo, leaving at around 11:00 PM to get to Merced in time to take care of their 4 cats. Unfortunately, they never made it. At around 1:30 AM, December 1, a drunk driver hit them on Highway 99 around the Clinton exit in Fresno, Ca.

Joshua Eisen, 28 years old married January 2, 2019, was not to see his first year anniversary as he was killed on the spot by the drunk driver. His wife Jennifer was severely and critically injured.

At approximately 2:10 AM, according to reports, Jennifer complained of severe pain. She sustained fractures on both lower limbs and pelvis. She also sustained an aortic tear, had hemothorax and other injuries. That afternoon, she was wheeled to the operating room to repair the aorta, insert a chest tube for the hemothorax and debridement of the fractures.

December 2, 2019, she was wheeled back to the OR for the reduction of the left and right limb fractures. The left limb was not reduced due to some pulmonary oxygen saturation problem and another surgery was scheduled for Wednesday.

Today, we are starting this GoFundMe as her recovery will be a long term and a long road. back to normalcy. To date, she is still unaware that her husband has passed away in the accident. She is heavily sedated because of pain from the injuries. She is on 24 hour pain medications via drip and also some oral analgesics.

The Fresno Bee has more on that crash:

A man was killed and a woman was injured early Sunday in a highway crash allegedly caused by a drunken driver in central Fresno, according to the California Highway Patrol.

The couple had just gotten into a single-car accident on northbound Highway 99 and were standing next to their car on the right shoulder when they were struck.

CHP officials said the couple was struck after Amado Mendez Ventura, 22, reportedly made an unsafe turn to the right shoulder and collided into a concrete wall and then hit the couple’s car head-on as well as the man and woman.

…The CHP said in a news release that Ventura appeared under the influence of alcohol. Following the crash, he was booked into Fresno County Jail on suspicion of DUI.

Beyond work for Baseball Prospectus, Ramos is the youth media program coordinator for underprivileged students at the  Youth Leadership Institute in Merced. More information on that program and some of the stories Ramos helped produce there can be found here.

The GoFundMe page mentions that Ramos’ injuries will take at least two years for recovery, and that the funds raised (they had hit over $25,000 of their $30,000 goal as of 3:20 p.m. Eastern Wednesday) will be used to support Ramos’ recovery and rehabilitation. They also hope to eventually start a foundation to help underprivileged and disadvantaged children in honor of Eisen (who was set to start as a public policy research assistant at UC Merced). There have been plenty of expressions of support for Ramos on Twitter:

Hi, wonderful people of Twitter. I have a very important GoFundMe for you to donate to. Please also keep Jen and their family in your thoughts. https://t.co/Hmp0SzCmjQ

This is devastating. Jen was one of the first people I met when I started writing about baseball online, and always one of the kindest and most thoughtful. https://t.co/2hVMBRMixC

We are devastated to learn about an accident involving prospect and stats team member Jen Ramos and their husband. Jen has long been an invaluable part of BP. We are keeping them in our thoughts and hope you will too. Jen’s family has organized a GoFundMe:https://t.co/ZsBW5IaxZ2

Hello all. My friend Jen was in a very bad car accident I just found out about a little while ago. They have been a very good friend and important voice in the baseball community for many, many years now. https://t.co/iMqg6EGsv6

Hi everyone. Jen is one of my oldest friends and was one of the first people who really truly believed in my writing. They are a wonderful human being and deserve so much better than this. Please help if you can. https://t.co/rz2Rcaa9jL

This is heartbreaking. A month before their first anniversary, Josh has been killed by a drunk driver.

Jen is facing two years of recovery from physical injuries; please donate if you can.

And please, don’t drink and drive. Not once. Not even a little. https://t.co/7qxWTzPcQO

You may know Jen from @Hardball_Times or @baseballpro. They are an important voice in the baseball twitter community but they’re also a beautiful person and I’m so grateful for their friendship. We also shared a love of Springsteen, Star Wars and baseball. Please help if you can.

Our thoughts go out to Ramos, and to the family and friends of the couple.