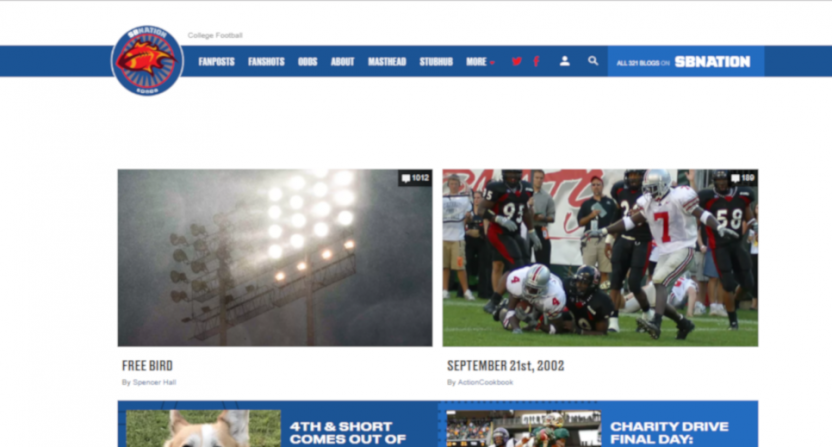 It’s the end of an internet era as we know it. Over the last decade-plus, Every Day Should Be Saturday has played a giant role in online college football discussion, first as an independent site since 2005 and then under the SB Nation umbrella since January 2010. The site’s featured everything from massive charity donation drives to offseason crime standings to discussions of such strange things as Knoxville’s Sunsphere to a more effective takedown of Craig James than anyone at ESPN or Poynter ever delivered, and it even spawned its own unofficial Wiki. And in addition to hosting plenty of talented writers, it also attracted a lot of repeated commenters who built a community there and got to know each other on and offline. But site founder Spencer Hall announced Wednesday that while he’s staying with SB Nation, EDSBS is shutting down. The site will remain online with archives intact, but Hall’s moving on to a new project. (Update: that new project is Banner Society, discussed here. Our original post follows.)

…it's time to play Free Bird for EDSBS dot com y'all
https://t.co/7r9GwxqCqo

In a later tweet, Hall confirmed that the Shutdown Fullcast podcast (with him, Ryan Nanni, Holly Anderson and Jason Kirk, all of whom have played large roles with EDSBS and with SB Nation’s CFB coverage) will continue:

yes because it can't be killed

if you are feeling down about the end of https://t.co/5GoJWeRw1R (and i certainly am), maybe watch this space tomorrow? could be something here? hard to say, i definitely don’t know anything that i’m being cagey about.

And he’s also been been talking about afootballwebsite.com, a URL that currently redirects to this 1999 Texas marching band tribute to the 12 Texas A&M students who died in a bonfire tragedy, but something that may redirect to the new project once it’s up. It will be interesting to see what this new project is and how it fits in with SB Nation’s other efforts. But for now, Wednesday saw a lot of Twitter tributes to EDSBS; here are some of those.

When "college football internet" refers to the deranged, obsessive, bizarrely wholesome corners of CFB fandom, it refers to everything that sprang from exactly one starting point: EDSBS. And without it, hilariously many of us spent the last decade doing something else entirely

The end of EDSBS is the end of an era; it's impossible to overstate the importance of the site to the CFB online community now. (Spencer is also among the very short list of folks who encouraged me from blogger obscurity to write more and for larger platforms, including EDSBS.) https://t.co/oMNtQa5fWU

I owe a lot to @edsbs — the blog, the writers that have come through the blog, and the person. I’m way more emotional to see it go than I thought I’d be https://t.co/DVQJGbaPTc

Spencer gave me my start in writing. The first things I ever wrote for an audience were for @edsbs, and they were patently insane, and I am so incredibly grateful for every little bit of it. https://t.co/1x4ShHbsyt

Writing for Every Day Should Be Saturday the last five years has been a privilege and a joy, and I thank anyone who took the time to read, contribute and share in the strange little community it created. Thanks to @edsbs and @celebrityhottub for giving me the chance.

as a reader, EDSBS was the first site that showed me I could do smart/serious work AND silly/ridiculous work and that both of those things could be really good. sad to see it go but thrilled for what’s to come.

4) Went to four Mardi Grases (Mardis Gras?) and only fell asleep on a foot pillow once.
5) Ate at the literal best restaurant in the world.
6) Southern engineered a way to watch three football games at once, outside, in a remote hunting cabin in Central Texas.

Thank you for some of the best sports writing I’ve ever read, Orson. But even greater thanks for hosting a forum that allowed me to meet some of my now closest real life friends.

EDSBS got me so into college football that I started a shitty blogspot and started tweeting links into a space where like 10 people were even listening. I eventually got paid for a few years to write about it, a fact that remains totally wild to me.

When the sports blogosphere was small enough that anyone good got read widely and often, *everybody* read EDSBS *every* day.@edsbs, @HollyAnderson, et al. set the bar and constantly raised it. Thanks for showing us all it was possible. https://t.co/j1qFMCAng3 pic.twitter.com/X6X7gzlvwc

Those are just a few of the many people who have chimed in on what EDSBS meant to them, from a place to write to a place to read to a place to find community. There are plenty of other touching tributes in the comments of that last post, too, which currently has over 1,000 comments. At any rate, EDSBS certainly made a giant mark on the college football world, and the tributes illustrate that. And we’ll see what Hall and SB Nation do next.

[Every Day Should Be Saturday]

We need to talk about Deadspin