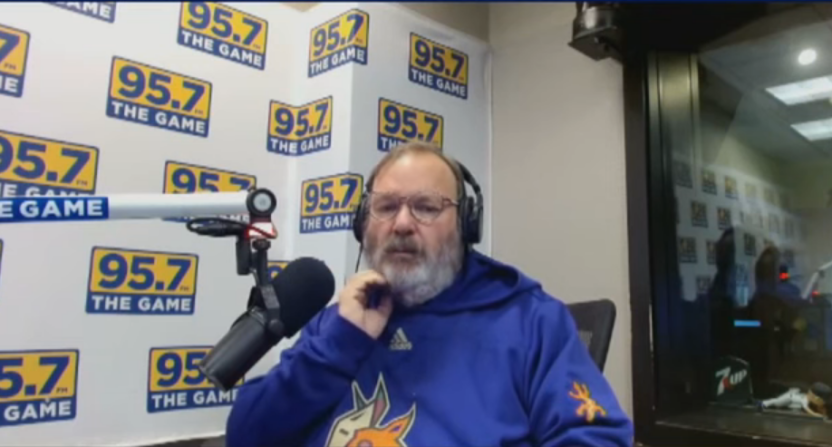 Ray Ratto has been in fixture in the Bay Area for decades. He has worked in print, television, and radio, including as a columnist for the San Francisco Examiner and the San Francisco Chronicle. He now writes for Defector and cohosts a radio show with Damon Bruce called Damon & Ratto on San Francisco’s 95.7 FM.

Awful Announcing caught up with Ratto to discuss a variety of topics.

How is Defector different from your previous writing jobs?

“The people I work with get it, and the audience pretty much gets it, so I don’t have to explain everything. The more important thing is that you can pretty much free range about anything you want to write about. Because there are people there who are interested in nearly everything, you can use them as resources. It’s an incredibly comfortable place to work even though I’ve met about six of (my coworkers).”

What has gotten better and worse about sports media?

“You have to be sharper about what you do and how you do it. And how you source things. You just can’t pull stuff off the internet without vetting the hell out of it in more exhaustive ways than you used to. But there are still great people out there who are young and making technology better. I don’t think it’s better or worse. It’s just different. And you have to be a little more nimble to keep up with it.”

It doesn’t seem like the Warriors’ youngsters and veterans are meshing. What’s wrong?

“They have tried incrementally to improve the second unit by putting them with Draymond Green. But for the most part, they got a little greedy. They had to calm down and recognize what they’ve got now with their veterans is something that won’t happen again. Don’t squander that by trying to make 2025 appear before you finish 2023.”

What do you think of Green’s future in the media?

“He will make scads of money. I don’t know if the media will be enough to satisfy his curiosities. He could do that easily. Nothing that happened in the offseason is going to deter that. Television hires anybody. Urban Meyer is a disaster. He got a job in 8 minutes. Draymond Green, his future was already assured before any of that happened. I don’t think it’s been damaged in any way by punching Jordan Poole.”

Why did David Shaw resign from Stanford?

“I think he recognized that the transfer rules put Stanford at a profound disadvantage. And four years of losing. I think COVID knocked them off their moorings and it became impossible to get it back. I think he might have gotten one more year because Stanford doesn’t fire people unless they do something really awful. And he never did anything awful. But I think in the end, the business of the game passed him by. It’s not that he didn’t understand it. It’s that he was at a place where he couldn’t take advantage of it.”

Will Shaw end up in television or the NFL?

“My theory is that he could do TV, but he could do that with half his brain tied behind his back. I rather imagine him as an executive for a team or in the league. I think he thinks of football in broader terms than just coaching. If he’s got the bug, he could get a job (in coaching). But he always seemed to turn down those jobs in the past.”

“That’s going to be determined by how well their defense plays for the rest of the year. The defense is superb and it’s the reason why they have seven wins. If that defense can carry them deep into the playoffs or a Super Bowl, Jimmy G is the starter next year because it’s the safest play. Again, it was Kyle Shanahan being impatient for the future. Through no fault of his own, Trey Lance is suddenly an afterthought.”

What do you think the outcome this weekend will be for Barry Bonds as far as the Hall of Fame?

“He should have been voted in well before this. But I see very little chance of him getting in via this committee. This feels like the kind of committee that is going to reward people like Fred McGriff far more than someone like Bonds or Roger Clemens. … Once it gets into these smaller committee rooms, it makes it easier for people who want to reward their friends and punish their enemies. And Bonds did make a lot of enemies.”

Have you experienced an uncomfortable moment with an athlete?

“There was a weird one that only involved me peripherally. Rick Reilly wanted to do a (Sports Illustrated) piece on Bonds. And Bonds knew that Reilly was not a fan. So I’m standing in the clubhouse one day and Reilly is talking to me. Bonds comes over and he starts talking to me like we’re long-lost friends for about five minutes. And I know what he’s trying to do: it’s to make Reilly feel small. When that ends, I feel awkward. Reilly feels awkward. Bonds is probably cackling to himself. I turn to Reilly and say “You know what that was about, right?” And Reilly said ‘Yeah, I think so.

“Then I walked out to the batting cage and up to Bonds and said: “That was just for Reilly, right? We’re not all of a sudden best friends.’ He said “Oh, no.” So I said “OK. Just so I know.”