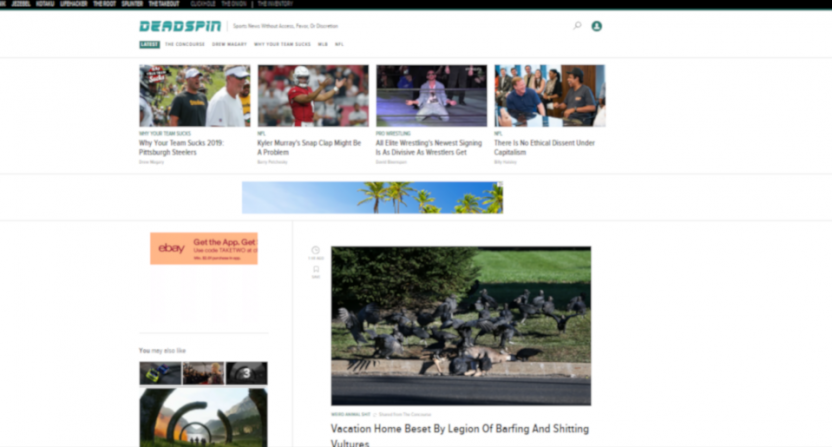 More changes are coming at Deadspin, with editor-in-chief Megan Greenwell resigning Friday. That resignation comes four months after private equity firm Great Hill Partners bought Deadspin and the rest of Gizmodo Media Group (the former Gawker sites, plus other sites like The Onion, The A.V. Club, The Root and more) for “much less” than the $135 million Univision paid for the Gawker sites in an August 2016 bankruptcy auction. As per Maxwell Tani of The Daily Beast, Greenwell blasted the new leadership of G/O Media (the company Great Hill set up to run their new sites, headed by Jim Spanfeller) on her way out:

“I have been repeatedly undermined, lied to, and gaslit in my job,” Megan Greenwell said in a brief phone call with The Daily Beast on Friday.

…Greenwell said Friday that she feels “heartbroken” about leaving and that, while she does not want to be seen as a victim, recent decisions by company brass left her with few options.

Among the many grievances, Greenwell said, G/O leadership refused to guarantee editorial independence for Deadspin and asked for the site to “stick to sports”—a long-running source of frustration for a staff that also covers media, politics, and culture beyond sports.

“That’s not something I feel I can ethically do,” the departing editor said.

Tani’s piece goes on to detail some particular issues Greenwell had with G/O management, including pushback on a Deadspin story about the new bosses (including a company-wide e-mail from Spanfeller protesting it before its publication) and G/O Media editorial director Paul Maidment’s refusal to send an e-mail in support of Deadspin’s newsroom. Meanwhile, Maidment put out a statement (issued to several media outlets, including The Daily Beast and The Washington Post) that seemingly confirmed Deadspin will be changing to a stick-to-sports model:

“We are laser focused on serving Deadspin readers sports and everything related to sports. Our former editor had a different vision and we wish her well in her future endeavors.”

We’ll see how that strategy works out for Deadspin. As ESPN has found, it can be pretty tough to instill a “stick to sports” policy in a 2019 landscape where sports news is often intermingled with political news. And a stick to sports strategy would mark a dramatic change from what Deadspin has done in recent years, which has encompassed plenty of media coverage, political coverage and more. And while their recent approach has differed from some of what the site’s been known for in the past, it’s also brought them some readers; Tani mentions that Comscore data gave Deadspin a site-record 17 million unique visitors in June.

Thus, a hard pivot away from that approach seems like a challenging thing to do. And that’s perhaps especially true when that pivot also comes with a laundry list of restrictions likely to make staffers flinch; as per Tani, those include handbook rules that the company can search reporters’ belongings and Twitter accounts, review their electronic communications, restrict their dress, and ban them from using encrypted e-mails. Attempting to impose those restrictions may not go over well with reporters at Deadspin and other sites; it’s notable that the sites’ union has already pushed back on them and said they’re not enforceable under the terms of their contract.

Our statement on the G/O Media handbook. pic.twitter.com/pf3MaluIwe

We’ll see what’s next for Deadspin and the rest of the former Gizmodo Media Group.