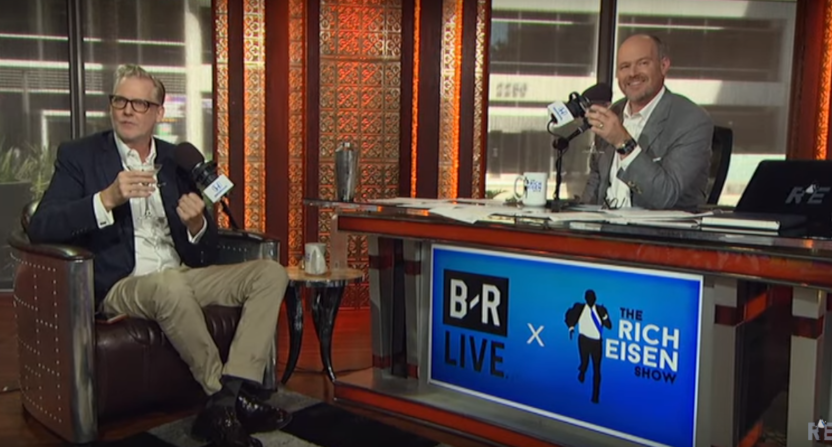 There have been a lot of unusual post-ESPN careers, but one of the most intriguing comes from Craig Kilborn. Kilborn worked as an ESPN anchor from 1993-96, then became the first host of The Daily Show on Comedy Central, then hosted The Late Late Show on CBS from 1999-04. Since then, he’s done some other unusual things, including 2010’s The Kilborn File on selected Fox stations, a 2015 Bojack Horseman appearance alongside a character voiced by Keith Olbermann, a 2016 Kraft Macaroni and Cheese campaign, and his current Instagram presence. And on Friday, Kilborn spent a whole hour on The Rich Eisen Show on Audience and B/R Live, talking with fellow former ESPN host Eisen about ESPN’s 40th anniversary Saturday, their time their, Kilborn’s departure from The Late Late Show and more. Here’s one key clip, involving Kilborn making the two of them martinis while they discuss ESPN:

Here’s another one, featuring Kilborn talking about why he took “early retirement” after five years of doing The Late Late Show:

And here’s Kilborn talking about how he lost a three-point contest to Golden State Warriors’ coach Steve Kerr, with “reasons, not excuses” (including how it was supposed to be Kenny Smith shooting instead of him):

That’s a lot of funny stuff from Kilborn, and it helps illustrate why he’s still someone many in sports media think of despite his time out of the big spotlight. This was a neat interview to see.