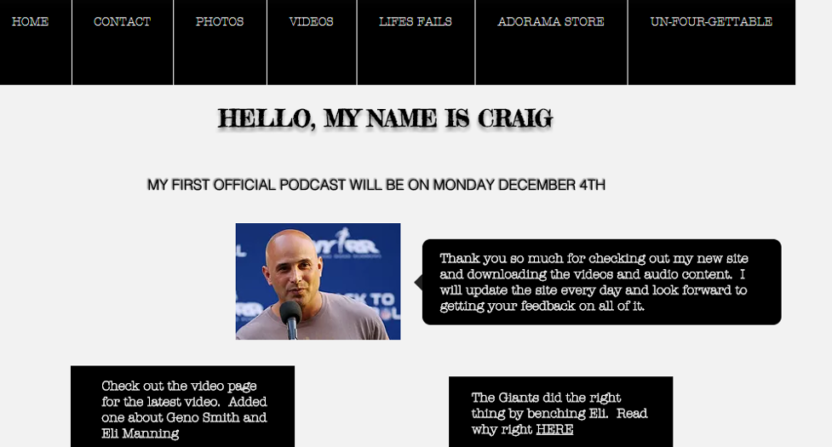 Craig Carton, the former morning co-host on New York City’s WFAN, resigned from the station in September following his arrest on wire and securities fraud charges over an alleged ticket resale Ponzi scheme, but has since loudly proclaimed his innocence and his desire to get back into radio.

It’s unlikely Carton will wind up at a major outlet any time soon, with his trial not likely to start until 2018, but he’s launching a podcast in the meantime at his website, hellomynameiscraig.com. (The more logical CraigCarton.com is currently vacant, but being offered for $795.

Carton spoke on Friday to Scaramucci, whose brief time at the White House last summer endedafter he made an inflammatory call to a New Yorker magazine reporter. The discussion will post on Carton’s website, hellomynameiscraig.com, at 10 a.m. Monday.

In the podcast, Scaramucci, who grew up in Port Washington, covers working at the White House, Donald Trump, Russia and other matters, including his resignation Tuesday from an advisory board at Tufts University, his alma mater, after conflicts with students there, most notably with the student newspaper.

This isn’t Scaramucci’s first venture into the sports world, as he previously appeared on Barstool Sports’ Pardon My Take and even sung Bohemian Rhapsody with the Barstool office:

But that’s still quite the interesting first guest for Carton. And a podcast can only add to hellomynameiscraig.com’s other stellar content, including an amazing written argument/”bed time story” that the Giants “were right to bench Eli Manning“:

Allow me to tell you a terrific bed time story. Once upon a time in a kingdom not too far away from here there lived a quarterback for an NFL team.   He was highly celebrated from coast to coast for his toughness and ability to come up big in the biggest spots of all.

His detractors pointed out his inabilities in regular season games and with clock management down the stretch of close games, his ardent followers would always remind those haters of his performances in not 1 but 2 Super Bowl runs and victories.

Alas, it all came to an end this week as the star QB was replaced by a man who couldn’t hold his jockstrap if they were playing jacks in a schoolyard playground.

The choice to bench the star in favor of this talent-less man became the talk of the town with men and women alike screaming to the rafters that he had been mistreated, that he deserved better.

The very same people that bitch and moan when they talk about athletes oversized salaries were suddenly upset that the star QB was being “mistreated” by the team that stood by him in good times and plenty of bad.

The quarterback of course is Eli Manning.  But if you can just for a moment take his name off of the story and consider the following.

What would you say about a Franchise Quarterback playing for your favorite team for the last 14 years that had only won a playoff game in TWO of those 14 years.  Two!!!

What would you say about that QB if it was pointed out to you that he and his team had missed the playoffs altogether in five of the last six years despite having the best offensive player in the sport on his side of the line of scrimmage.

What would you say if you knew that the team he leads had not won a single playoff game in the last six years and in seven of the last nine years?

You most likely would have advocated his being replaced

And this week he was.

Damn. That one’s going right into the next edition of Grimms’ Fairy Tales. Carton’s podcast will have a lot to live up to to compete with that kind of quality. Just don’t tell his former WFAN colleague Mike Francesa that the Giants were right to bench Manning. (Or maybe do tell Francesa that. Especially if Carton does it himself on his podcast. Now that would make hellomynameiscraig.com a destination.)