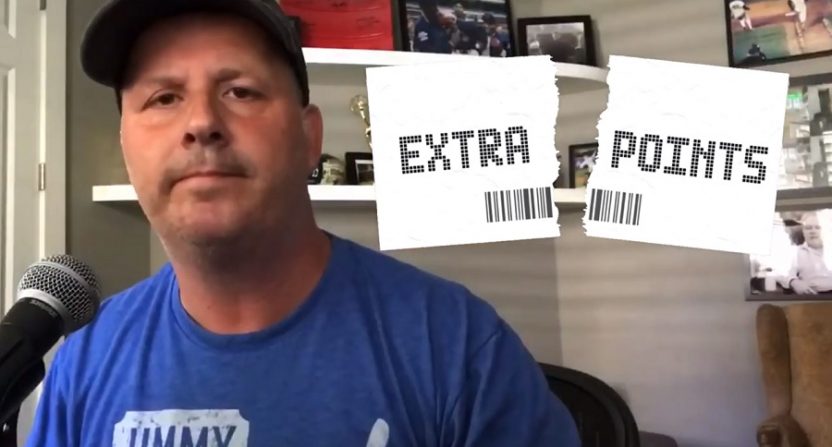 For better or worse, Jimmy Kimmel’s Cousin Sal has been synonymous with sports betting for the last decade, thanks to his recurring spots on Bill Simmons’ podcasts (from ESPN to Grantland to The Ringer). Now, Sal Iacono is attempting to go from an extra wheel to the big fish in the pond.

On Monday, Iacono announced the launch of Extra Points, his own sports media company that will be focused on (what else?) gambling. Taking a page out of The Ringer’s book, it appears that Extra Points will be a podcast-centric venture, with a self-titled, thrice weekly show featuring Iacono and Dave Dameshek as its flagship program.

Here’s more, from The Hollywood Reporter. Additionally, The Ringer’s Against All Odds podcast will be moving to Extra Points.

After years of guest appearances as the go-to gambling aficionado, Sal Iacono, AKA “Cousin Sal,” has started his own venture with Extra Points, a media company focusing on sports, sports betting and comedy.

Presented by Mush Media, the company launched Monday with its flagship podcast Extra Points, hosted by Iacono and The NFL Network’s Dave Dameshek, which will release episodes weekly on Mondays, Wednesdays and Fridays across all major platforms. Iacono and his childhood friends “The Degenerate Trifecta” will also move their Against All Odds show from The Ringer to Extra Points, along with new comedy podcast Laugh Lines that will premiere Wednesday with a rotating lineup of comedians.

Iacono also released a trailer for the new podcast.

Iacono and Kimmel are executive producers on ESPN’s forthcoming 30 for 30 on the 1986 Mets, and Iacono remains a panelist on FS1’s Fox Bet Live, the rechristened Lock It In.

The sports gambling scene is becoming increasingly populated by a variety of outlets, catering to both the hardcore and casual gambler. Given the existing audience that both Iacono and Dameshek have, through The Ringer, the NFL, and their other work in sports media, it wouldn’t surprise me to see Extra Points hit the ground running and somewhat maintain that pace given the connections that those involved have, in the worlds of both sports and entertainment. But will they be able to take this venture to the next level? Only time will tell, and full seasons of both the NFL and college football this fall will only help.